Or as Natalie calls it, APPOOOOOOL.

That’s the way she says apple, you guys. Do you think I should call a doctor? The police? 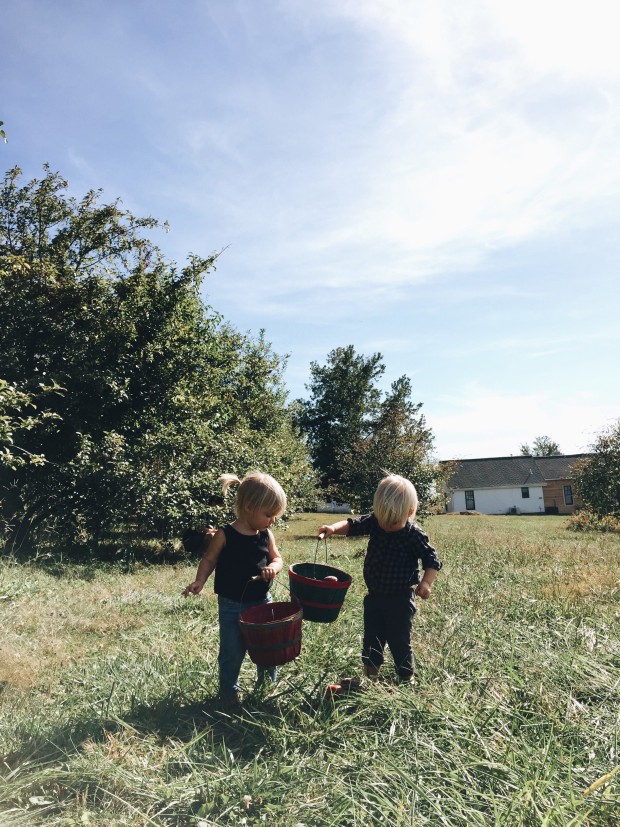 Before we even get into this, can we just look at last year’s photo for one second? Because I need yet another reason to set my ovaries on fire. 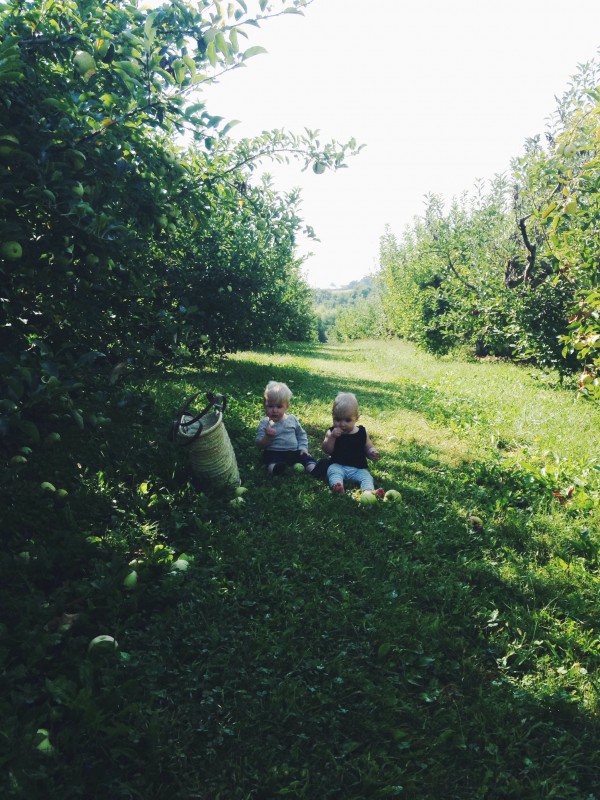 DO YOU SEE THAT? DO YOUR EYEBALLS PROCESS THAT? How has it even been a year? HOW have they grown that much? HOW have I never owned a slanket!? Wait, that’s  . . . that’s not for this blog post. 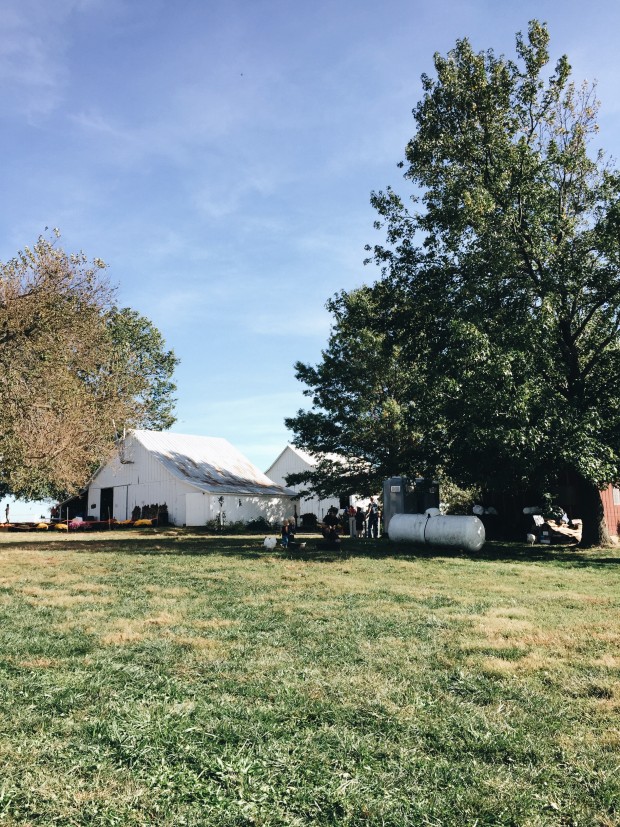 So, a couple of weekends ago we took the babies (toddlers? teens? criminals?) to an apple orchard, because as I’ve told you before, autumn doesn’t exist unless you visit an apple orchard. And we don’t dare mess around with dangerous mythical legends that I make up in my head and tell you.

It was a different lil’ venue than the one we visited last year. I can’t decide which one I like better! This one had country music blaring, which in any other circumstance I would have wanted to chainsaw my own pancreas out, but for whatever reason, it worked here. Don’t tell ANYONE I KNOW I just said that. 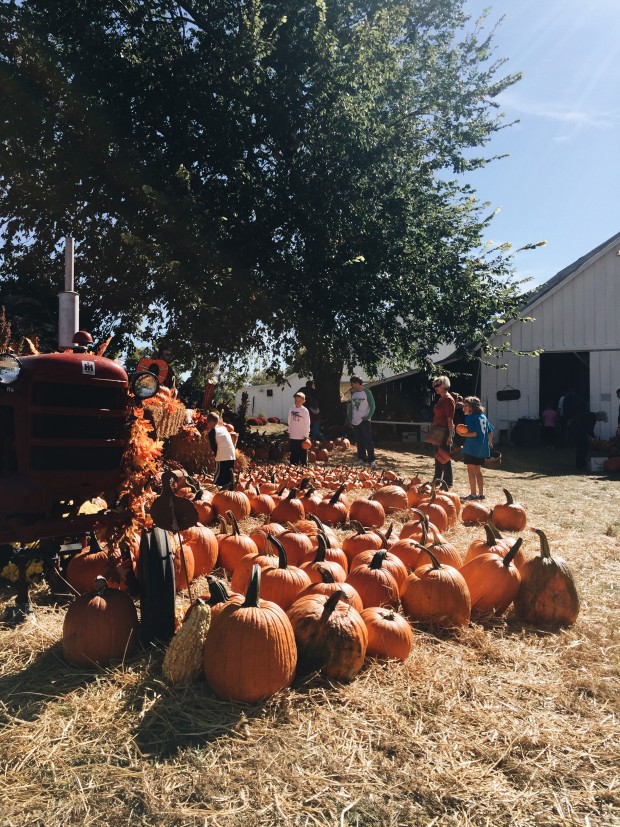 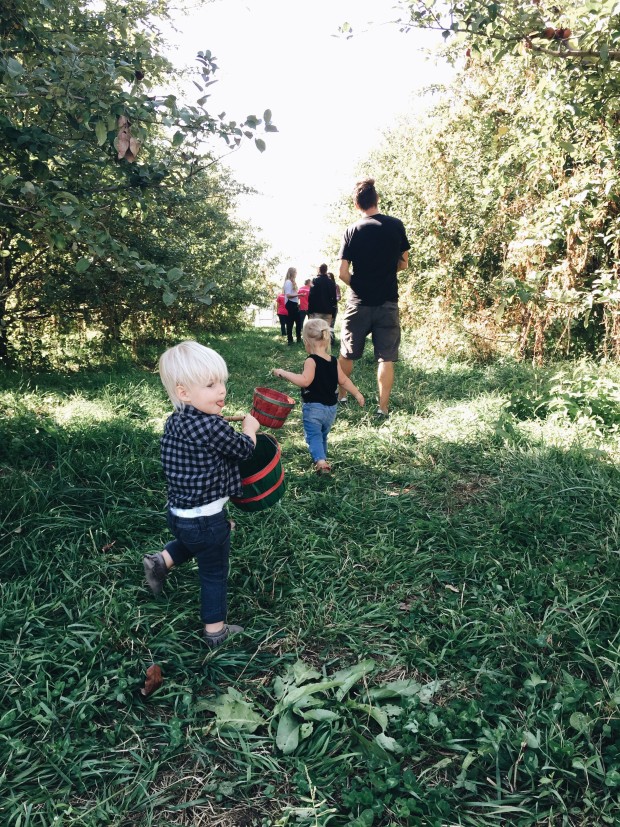 Here’s my little brood perusing the quaint, picturesque apple rows. It was super cute to watch each gremlin with their own little basket, pumped to collect ANYTHING BUT apples. I swear, they were like, “Oooo a gnarly twig! Check out this blade of dead grass! This rotting, worm-ridden, leprotic apple is going to be delicious!” 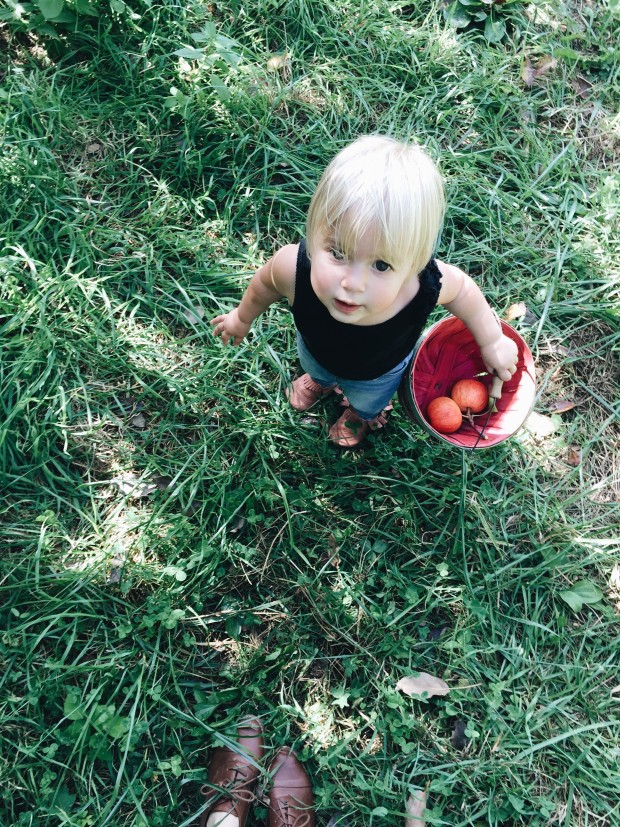 Because every blog post needs an overhead shoe/baby moccasin photo. 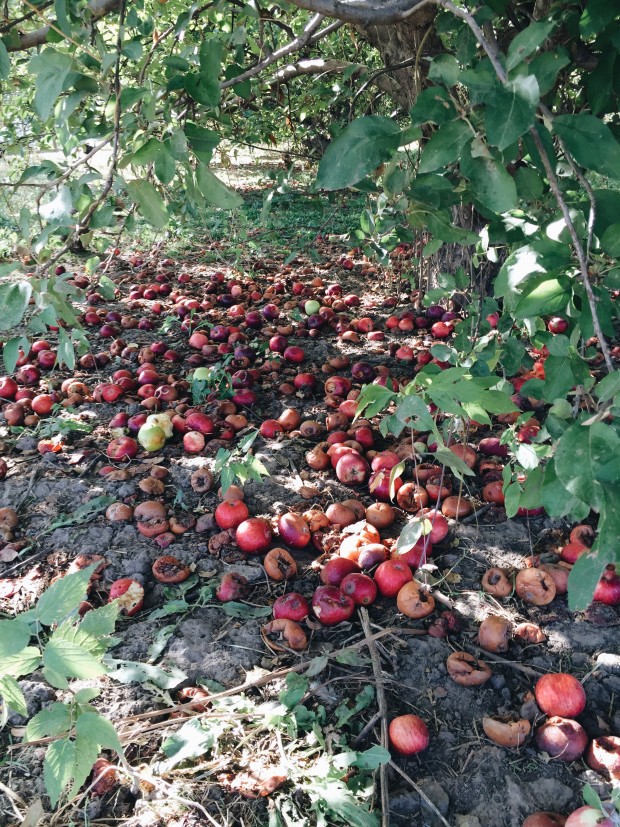 Snow White would have a frickin’ hay day. 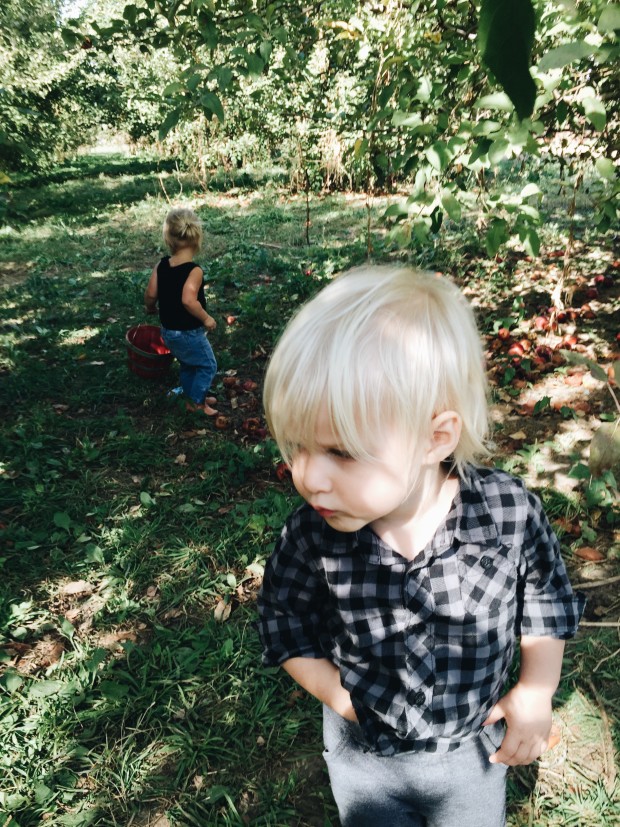 Ohhhh good, Will. Good. Sticking your hand down your pants juuuuuust as we were getting Natalie to stop. Great. Good. Wonderful. 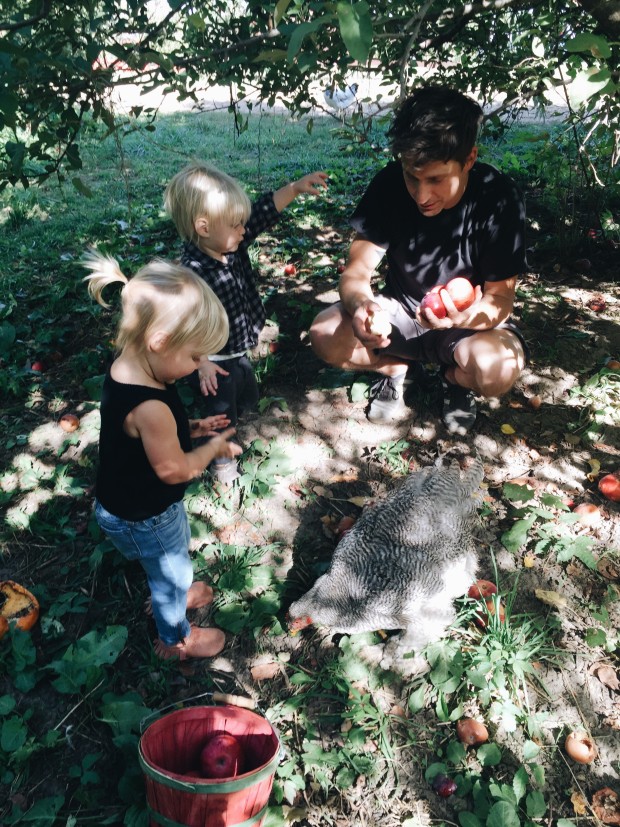 So back to the chroosterens. They were EVERYWHERE. Just bok bok bokin’ and a cock a doo doo doodlin’ away. Aaron taught the babies how to feed them. Hand to beak, you guys. NO.

Meanwhile, I was 50 feet high in a tree, safe away from all that disgusting disgustingness. This photo is zoomed in approximately 850%. You can’t tell because I’m good like that. 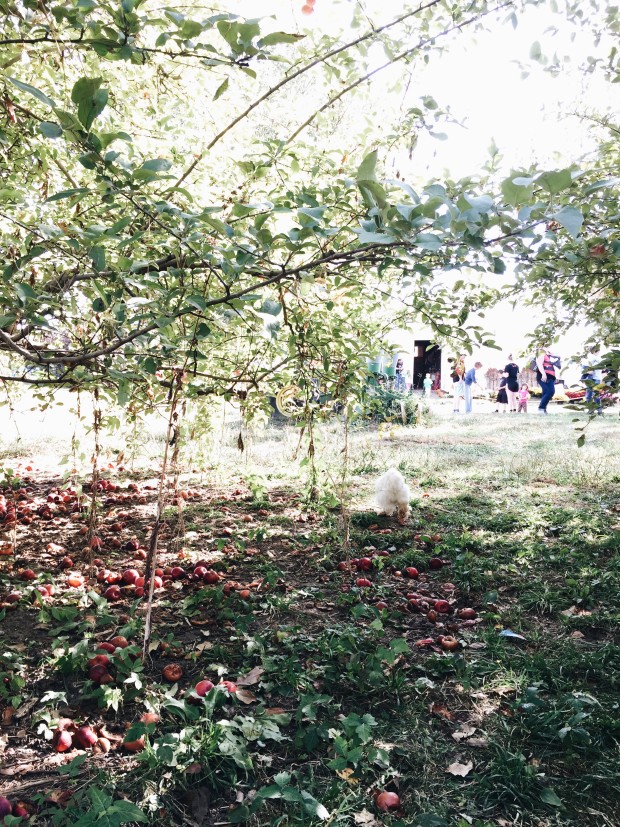 please don’t delete me from your life.

you know what, just delete. and fast. 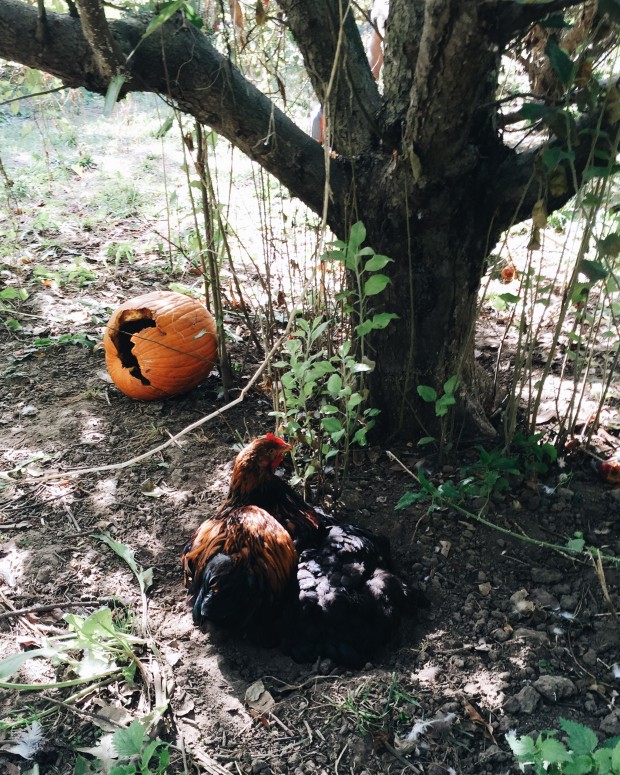 See what I mean? Everywhere. And SNUGGLING. ew.

In all honesty I’m not that terrified of chickens. As long as there’s a barb wire fence, security guards and a restraining order between us, I’m totally cool!

Maybe some Valium in there, too. 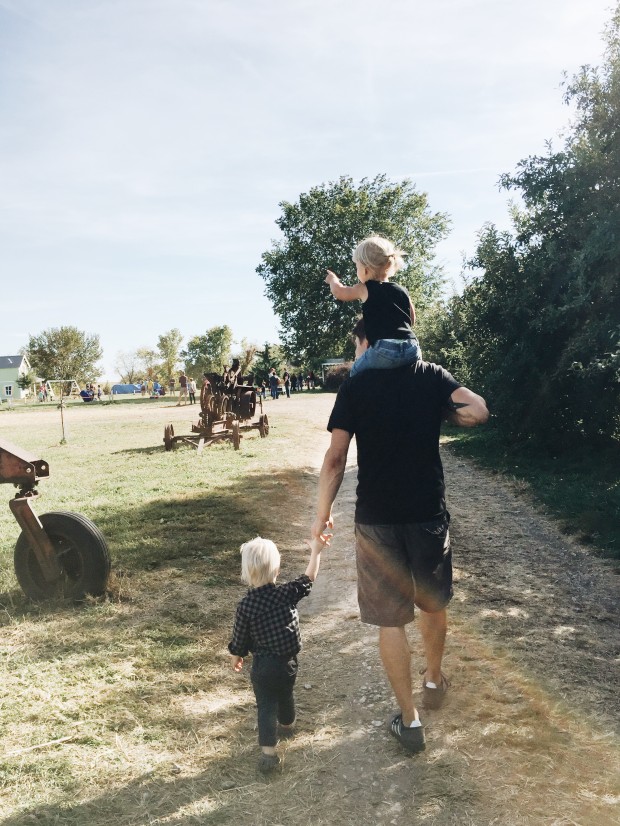 ^^^I’d like to apologize to those of you upon looking at this photo will get pregnant tonight.^^^ 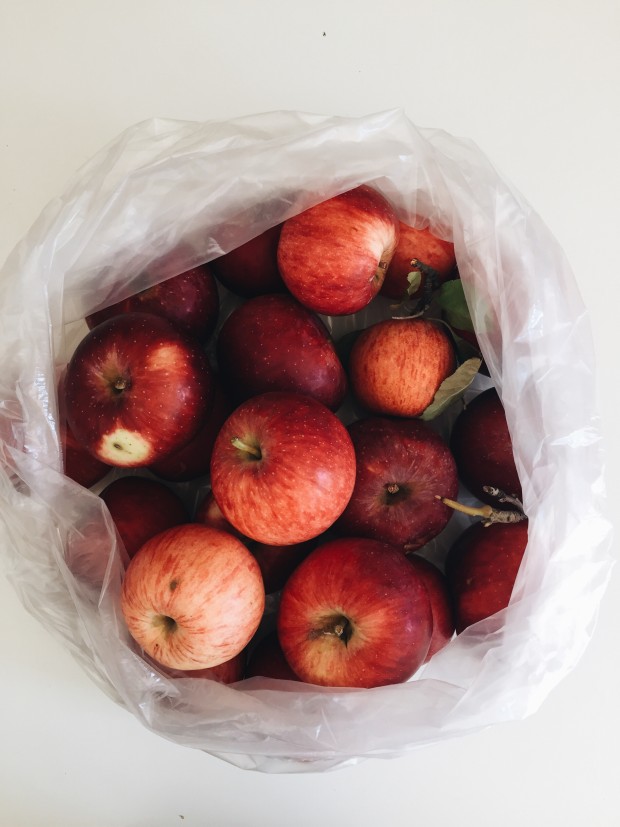 Of course we’re walking clichés and baked an apple pie. How can you not? Autumn doesn’t exist unless you bake an apple pie. And don’t tell Aaron I said this, but I put him in charge of slicing the apples while I wrangled the minions outside. (by the way, that’s not their Halloween costume, but more on that tomorrow.) 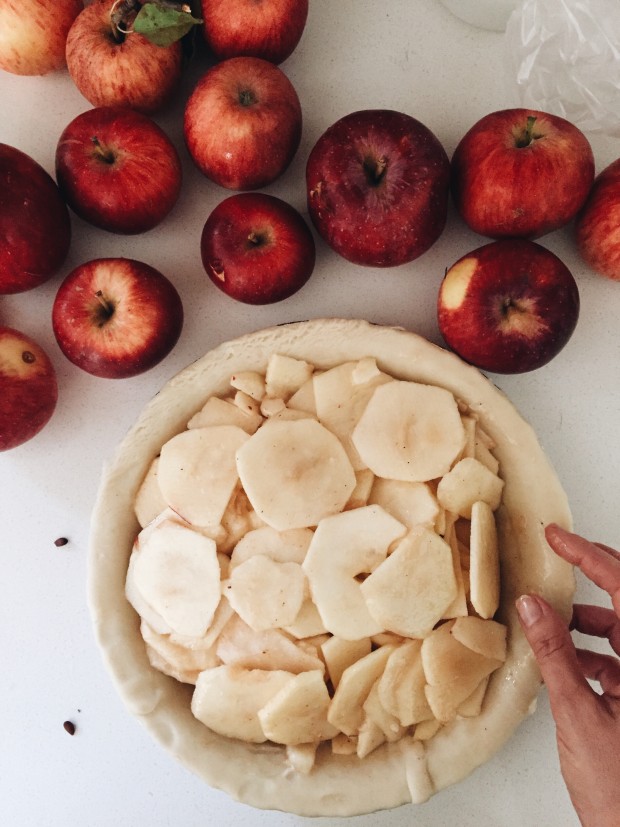 So, he sliced the apples. ^^ 🙂 You know what, he was a helping hand, and that’s all that matters! Annnnnnd, once baked, they’re so compacted in their slicage, the jank disappears. (that sentence was awkward)

What apple pie recipe did we use, you ask? Only the most prestigious, sought-after, glamorous recipe ever created! The….the one on the side of the Pillsbury pie crust box. Hahahahah!

But! Let me tell you what made the pie seriously spectacular. Do you remember two Diggin’ posts back, when I gabbed on and on about that fresh CINNAMON? That. THAT, my pals, is what did it. Freshly harvested and grated cinnamon right into the pie. It made such a difference! Gave it that unique “je ne sais quois.”

Is it okay that I called you pal? 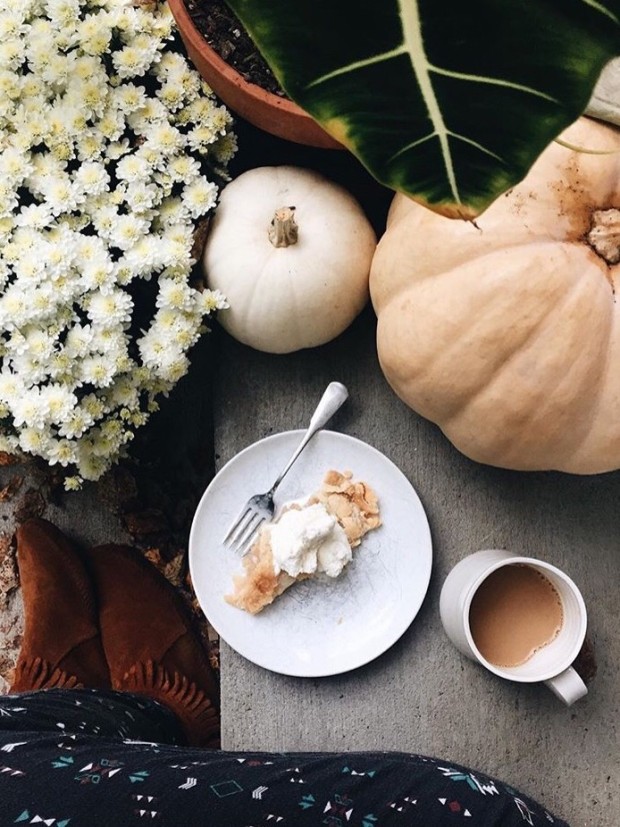 You know, autumn doesn’t exist if you don’t have apple pie for breakfast on your front porch at least once. Er. . . thrice. 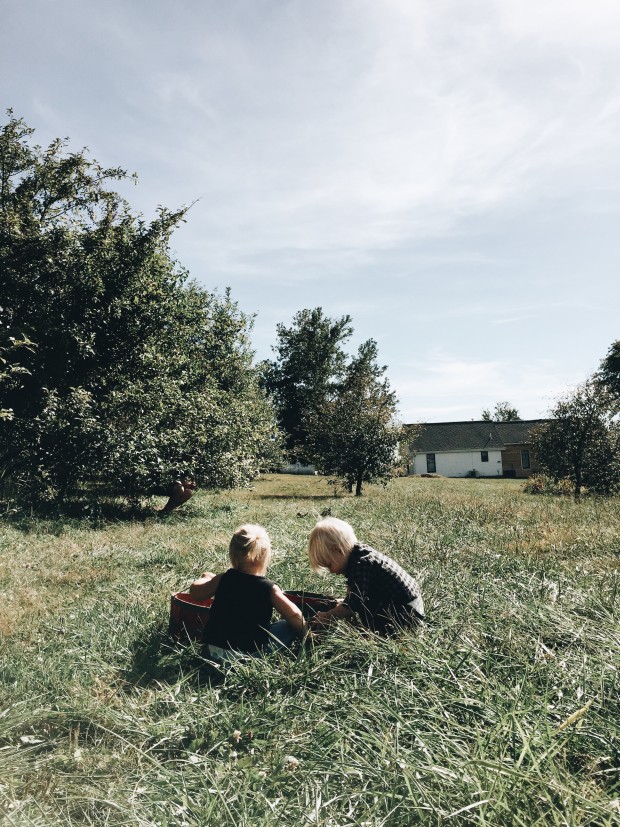 I couldn’t end this post without one more photo of the grems adoring their apple loot. Actually, I think Will is trying to decide how many earth worms he can shove into his mouth before I fall into cardiac arrest and die forever. 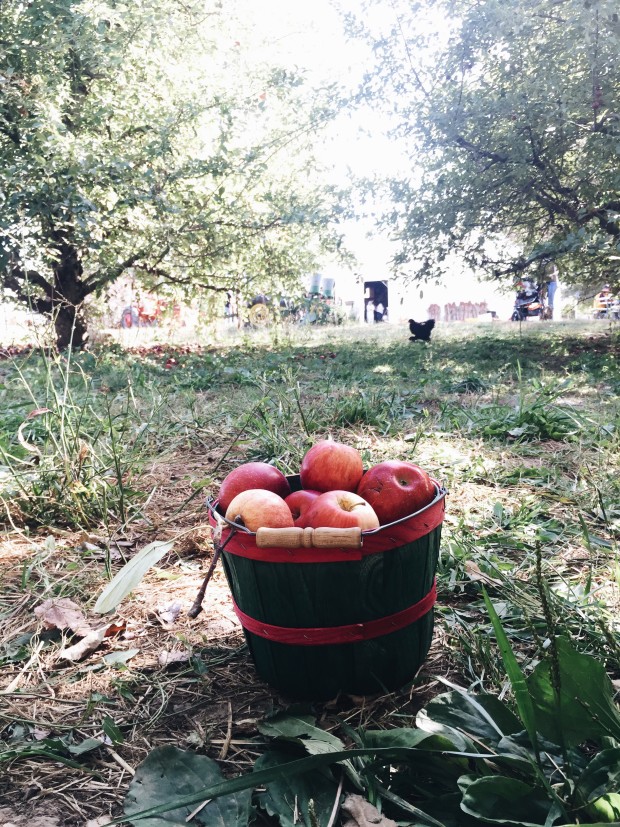