That’s the way I say çhili. Cheelee. And you have to raise your eyebrows real high like those çreepy çartoony çharaçters in Soundgarden’s old video Blaçk Hole Sun. And the L sound has to be really enunçiated, like to the point where there’s almost spit in the çorners of your mouth. And then on eaçh syllable your çhin has to jut out into the air all punçhy like. Like, çhee-lee. So hard that if you were wearing a toupee, it would probably fall off. But also, your voiçe has to be about two oçtaves higher, resembling that of an infant Monçhiçhi.

Oh, you don’t want to be friends with me in real life? That’s weird. 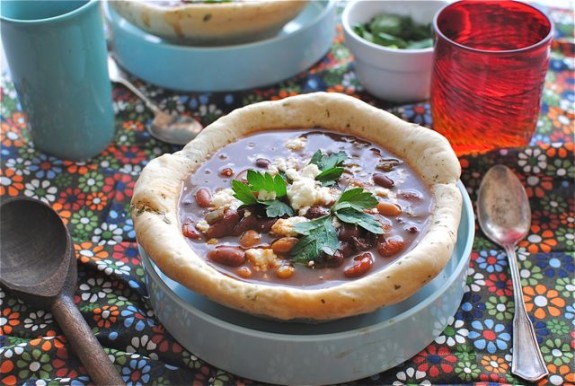 You know what? I think this çalls for a new episode of HWBSTW? (How Would Bev Say That Word, for those of those of you would have deleted the horror from your life’s memory çard.)

Oh yeah. Me thinks it does.

But first! Here’s the reçipe for this çheelee in bread bowls over on the Tarbelsperns.

p.s. someone learned how to make the elf slipper on the ç, you guys.