We do indeed. And it’s no-churn which means this takes less than zero effort. Wahoo! (<–I never do that. Felt weird.)

Remember back in 2018 when I made this No-Churn Rocky Road Ice Cream? Same thing, but with peaches. This one’s easier too, so get jazzed.

All (I think all? Pretty sure all.) no-churn ice cream consists of condensed milk, heavy cream and vanilla. So really, you could use this first part as the springboard for any sort of summer ice cream you want. Coffee (yes), chocolate chip (so much yes), mint (no thanks), bubblegum (please no) – go crazy. This is your life. Today we’re messing with some Georgia (said like Scarlett O’Hara) peaches. They’re wildly in season right now so let’s take advantage and hack into one or eighty!

You could definitely whizz this in a food processor for extra intense peach flavor in your ice cream, but I was all about not lugging out extra gadgets to clean on this particular day, and felt like some knife hacking. And it’s still peachy keen. (as if you didn’t expect that)

Okay, in a mixing bowl you’ll use a hand mixer and beat your heavy cream until you get stiff peaks. Which totally happened here but I forgot to get a photo because I was shooting video for it. So you’ll see those pretty (twin) peaks in my reel, just not here.

But what you do see here is the cream whipped, the condensed milk and vanilla added, and the peaches violently thrown in. Mixy mix.

Then just pour the peach mixture into a loaf pan with parchment paper in it. You’ve sliced another peach, so let’s just add those slices to the top of the ice cream. And remember the coconut that you toasted that you forgot to photograph because it’s also in video? Right. Let’s sprinkle that on, too. ‘Atta goil.

Too close! A little too close. (<–name that movie.)

Ugh, so good. Super peachy, super sweet. You could even add a pinch of finishing salt for an extra depth there. I kept it simple for the kids.

Tell me, are you a sugar cone lover? A flat coner all the way? Or do you prefer a cup to keep it less insane? Any of it works. All of it works.

I think sugar cones are cuter, though.

And oh, pile it on. Get way more ice cream than I’m getting here. We were late for something (which is not me at ALL) so I was panicking. But load it up, bruh!

And you never churned a thing! 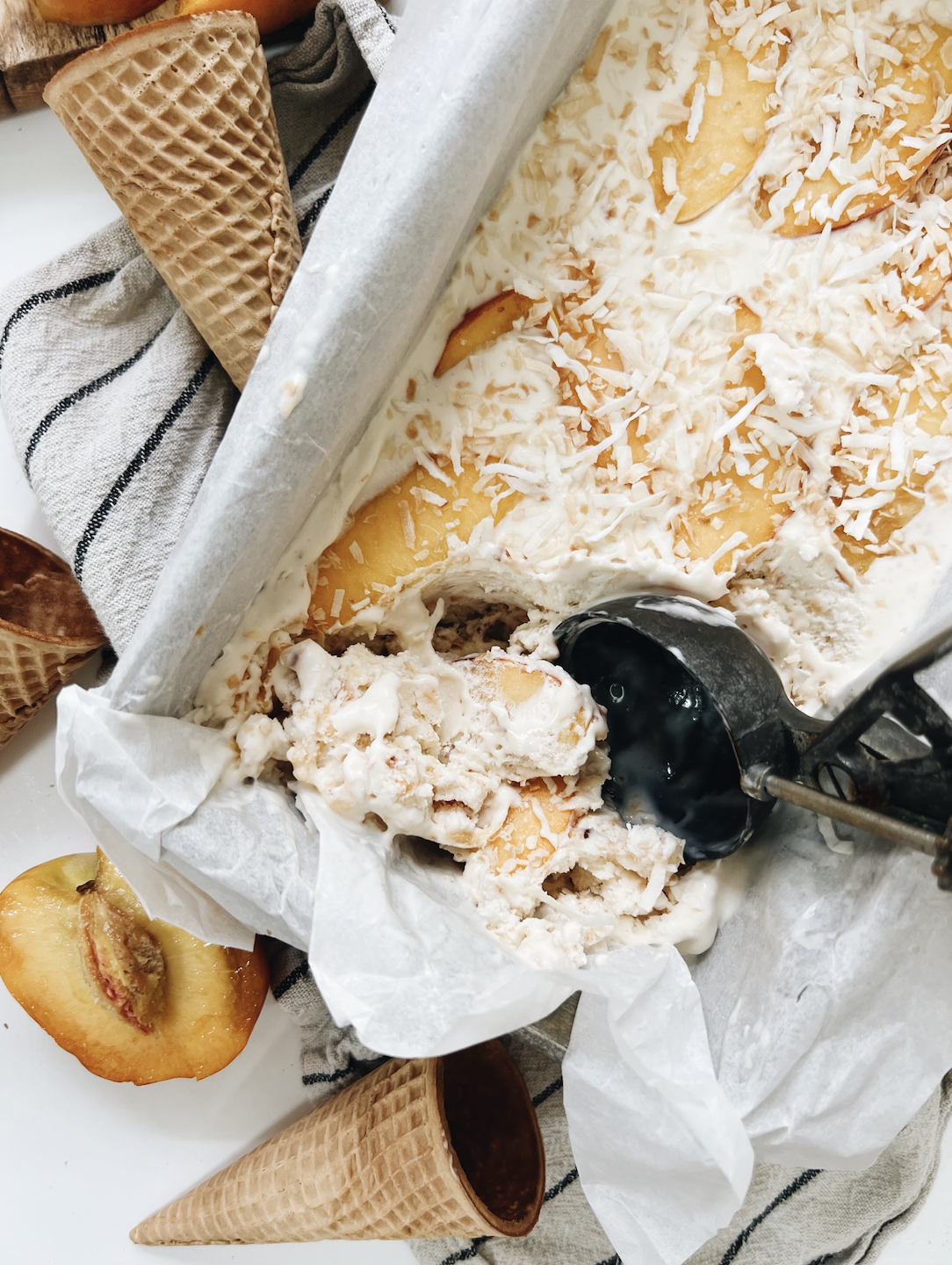 Tell me what other fillings or toppings I should add the next time I make no churn ice cream in five years!