But like, look at that crisped up pepperoni. We’re going places, you guys.

Nothing whack. And tell you what, if you don’t have a log of pepperoni in the fridge, the pre-sliced will work. DeLallo gave this me one and I like the smaller rings it makes. They’re not mini, nor are they the domestic size. They cute! But use what you have.

And the crusty bread, if you already have some good grainy sliced bread, or half of a homemade round that you’re needing to finish up before it stales, this is perfect. I went straight French Farm, but any delicious bread you have cut thick will do the trick. I’m telling you, you’ll flip over this. It’s so simple. Watch.

Crisp up your ‘roni, bruh. And listen, if you need to snack on a few while the beans braise, it means you’re headed the right direction in life.

This is what the garlicky beans and tomatoes look like right when you start. I sautéed thirteen truckloads of minced garlic in the leftover pepperoni oil and cartoon birds busted through my new windows and swirled around my head in flittery singsong.

You’ll add two cans cannellini beans, a cup of chicken stock, halved cherry tomatoes, and a bit of fresh lemon juice. And parsley! Chop up some parsley and violently throw it in.

This is about 10 minutes later at a medium heat. The beans have absorbed the stock. The tomatoes have wilted. The garlic and lemon have infused the whole mess and those flavors are rustic and homey and slurpy and WE STILL HAVE THE PEPPERONI TO ADD.

You’ll toast your bread. You’ll spoon the braised beans over the toast. You’ll nestle the crisped pepperoni here and there. You’ll squeeze more fresh lemon juice over it. You’ll drizzle your best extra-virgin olive oil over it. You’ll scatter a few parsley leaves over it. You’ll sprinkle some parmesan shavings over it. I’m basically seeing how many times I can say “over it” before you are, in fact, over it.

This is an absolute treat. A different take on casual supper, but with comforting flavors that are simple yet have a nice depth. (hi, garlic)

It also makes a nice side dish next to a roast chicken and green salad, if you need more on the table.

And you remember that crisped up pepperoni, right? Right. Make more of that.

Your new go-to quick meal. I put brain money on it.

Braised Beans with Tomatoes and Pepperoni over Crusty Bread 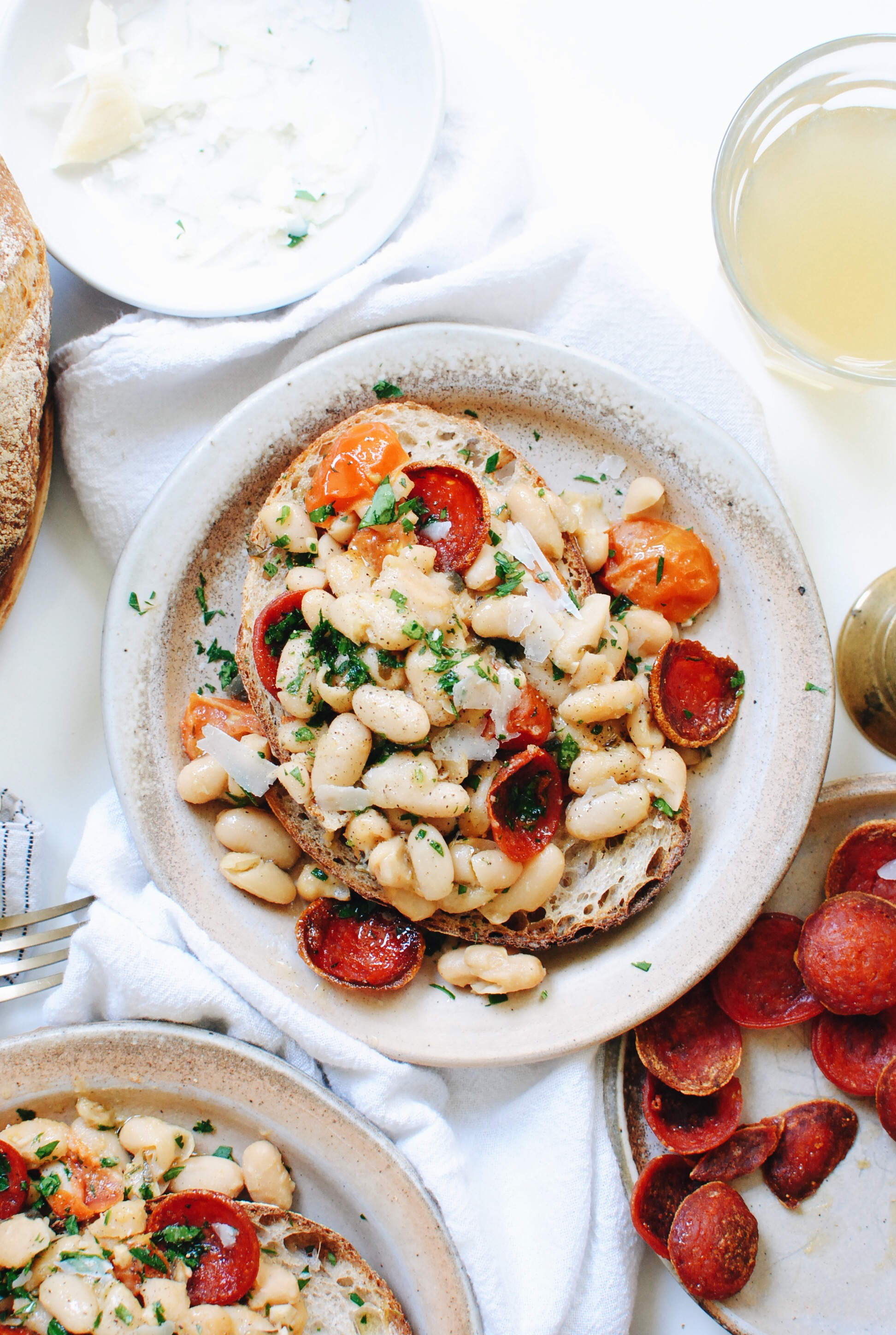 See if your kids like this. I just feel like they will. But don’t tell me if they don’t. Bye!