Hi, I think I’ve posted this recipe before! Great.

I’m not even going to look back through the archives and check, though. But it feels so familiar. It’s probably a weeeee bit different, so let’s pretend it’s brand new. Because it is! Brand new! I think.

Okay I went back and looked. It’s a little different. Just a hair, though. Apparently I really love shrimp coconut curry noodles, so let’s make it again! Ugh. Just love?

It’s quick, and that’s what I dig about this recipe. Lots of authentic curries (which are magnificent and totally worth it) are time-takers in the flavor building departments. And you remember how much patience I have, yes?

Sear the shrimp. (you know, I’ve never said this, but I think I should at some point, which is now – buy frozen RAW shrimp. Not the frozen cooked shrimp. Mega difference. The raw will sear and plump up nicely, and you run less risk with overcooking and spongin’ these bruhs out.)

Take the shrimp out and sauté some sliced onion (different than the other recipe!) along with sliced garlic and diced red bell pepper. (also different! see, I’m okay.)

Then you’ll scoot the veggies over and bloom the paste. We’re starting a band called Bloom the Paste.

Just press it into the pan with a little oil to release its goodness. Fragrance galore, guys.

Then you’ll add two cans coconut milk, two cups chicken stock, and the fish sauce. (fish stock is fabulous here, if you happen to have it!) Listen, don’t SMELL the fish sauce. Just add it, and move on with your life, okay?

Simmer simmer for a just a minute.

Yes I meant to write simmer twice. It’s a visual.

Then add half a box of pad Thai noodles to the pan! A little more than half a box is fine, too. They reaaaaaaaally soak up the sauce, and you don’t want it gloopy. You want it silky and luscious.

Then you’ll just add the shrimp back, along with a healthy squeeze of lime juice. That acidity wakes it up! And we need to wake it up. No sleepy heads allowed in our curry.

That was odd. Pretend I never wrote that.

And here we have it! Add a bunch of fresh cilantro and mint as a garnish, and you’re good to go. Little things like the curry paste + creamy coconut milk + fish sauce add up to sooo much flavor. And you’ve salted this whole thing early on, so boom. It’s quick, and it’s simple. And apparently I needed to show you again. 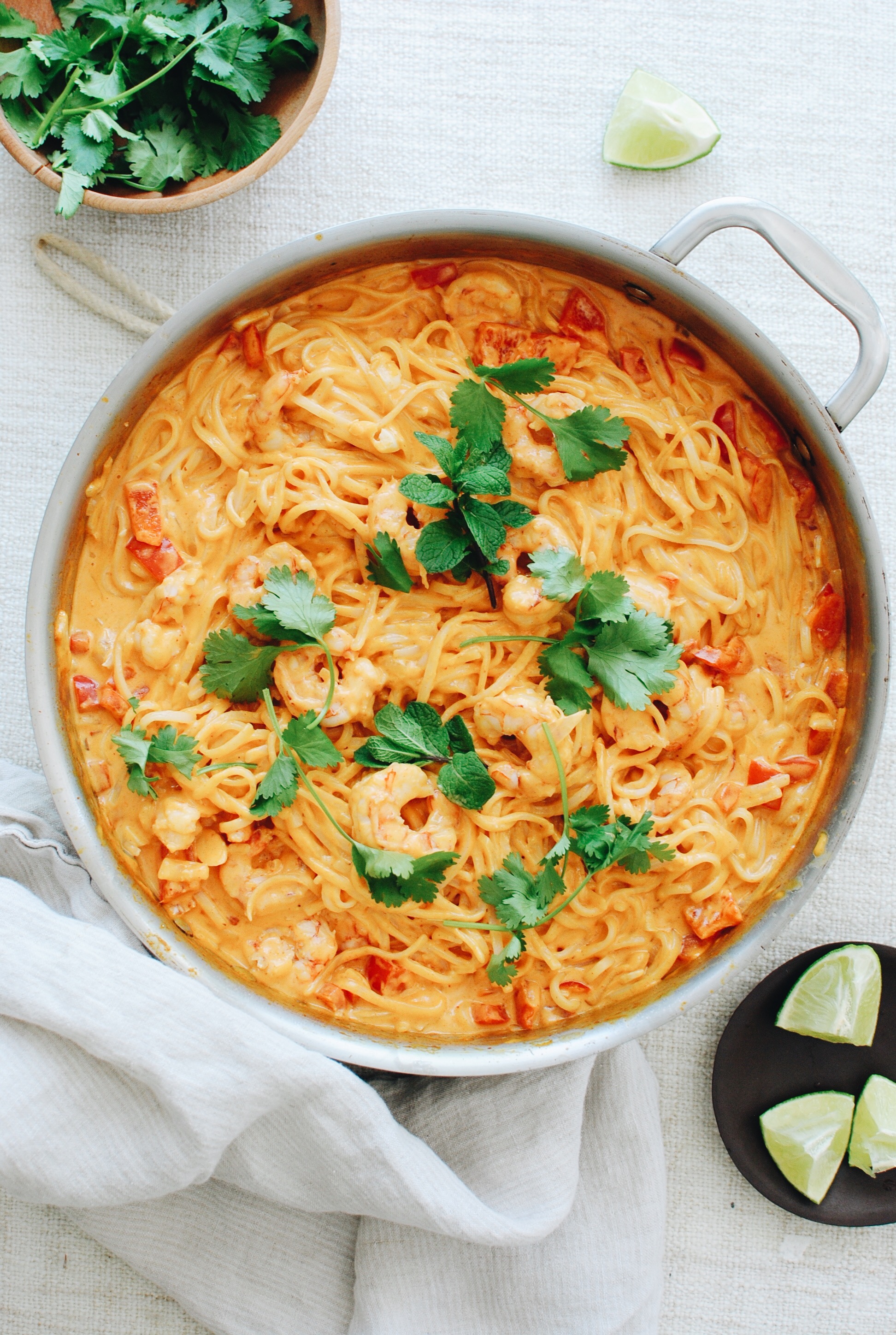