And yes, they’re fried, but I know you. You’re okay with this. Plus I just feel like a baked fish taco is wildly sacrilegious. “Who even does that?” – said like Meegan on Key and Peele.

So here we are. We’re making a batter with the beer AND the corn chips, you guys. And the spices and the flour, but the fun part is the corn chips. And really, you can use any chip you have. This was all that was left in the corn chip bag and I thought out loud to no one, “I really shouldn’t eat these. Oh! I’ll pulverize them into crumbs and mix with other carbs and beer and fry them and then eat them!” Just try to accept me, okay?

You’ll want about 1/2 cup corn chip crumbs. So start with over a cup of chips. Throw them in a food processor and blitz ’em down to gravel. I had already mixed mine with the spices here, hence its funny color.

Then pour it into the bee-ya! That’s beer. I’m pretending I’m a New Englander.

Add the flour and the egg and mix it allllll up.

You’ll basically cut up the tilapia into little sticks. However shape you want is fine. Once they’re frying in the oil they’ll get a bit wonky, but wonky is good. Wonky is a proper fish taco. We want wonky. We want the wonk. I’ll stop.

And they’ll come out like this. If you can’t see straight, that is normal. Happened to me, too.

And then you just make a dang taco!

Run a flour tortilla over an open flame for some toasting and a bit of charring here and there. This is the only way to prepare a tortilla.

Oh! That sauce on top. All it is is sour cream + lime juice + cilantro in a small food processor. Makes a tangy drizzle that wakes it all up. Vital stuff. Don’t skip this.

Crunchy cabbage on top adds a nice texture, man. That plus more cilantro leaves to garnish and it’s just, well, perfect and summery and crunchy and flavorful and you do remember the corn chips and BEER in the beginning, right? Yeah you do.

These are just fun, ya know? Changes up the taco routine, and like I said early on – any chip’ll do. I think Ruffles would be siiiick in this. (mom, sick means yummy.)

Add any other toppings you can’t live without and enjoy yourself. It’s almost summer. Fish tacos are mandatory.

Look, I don’t make the rules. 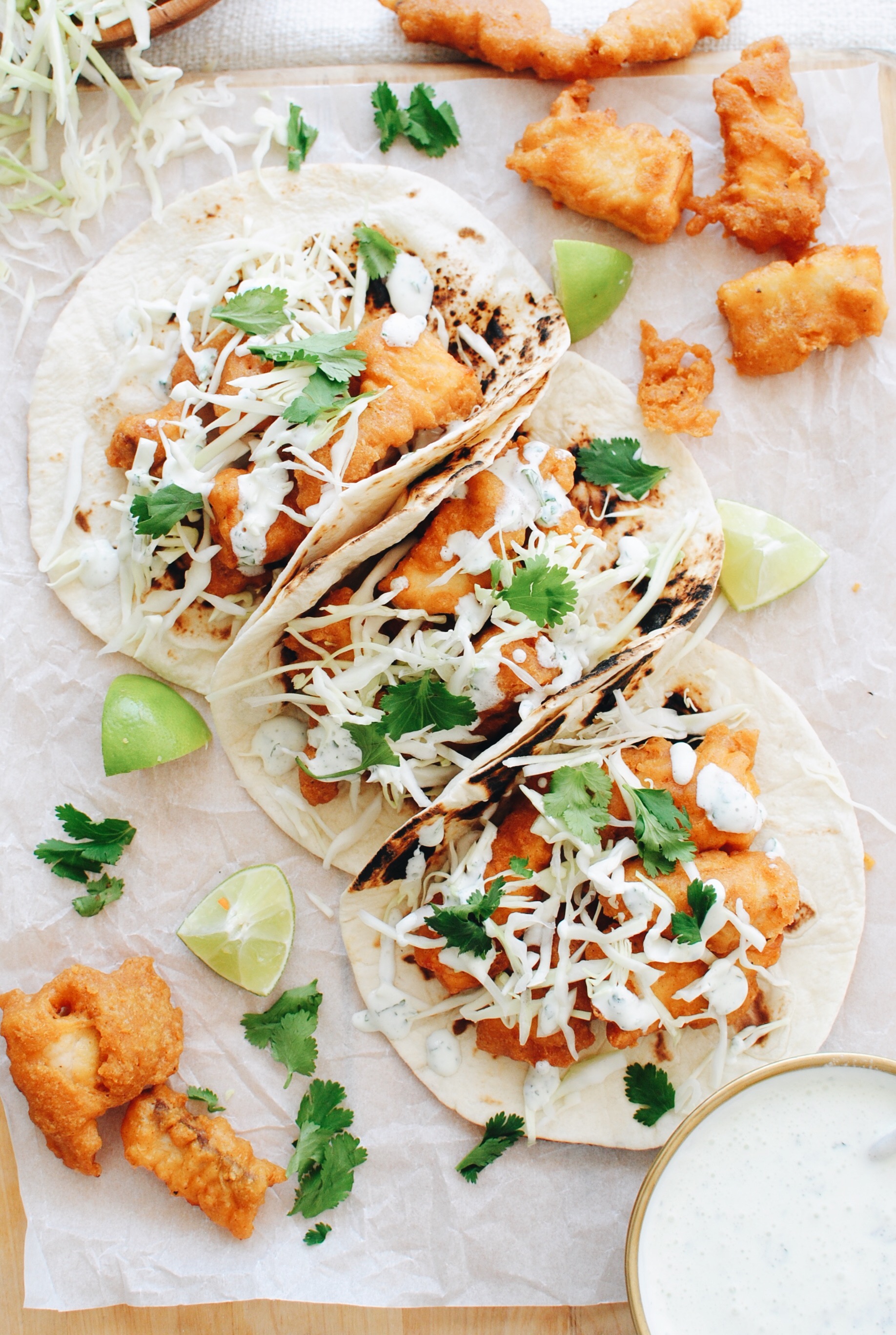 I made a CATFISH version of these years ago when the babies were TINY, if you need an ovary punch today.