ALL ABOOOOOARD. Or as Will and Nat would say, “Ahhh abuuuuud!” (you guys, toddlers don’t speak that well.) 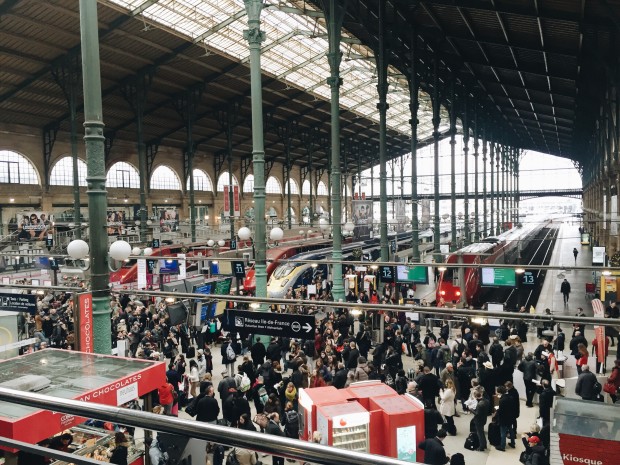 First of all, name that movie. ^^^ I mean yes, it’s the Eurostar train station, in all its hustle and bustle fabulousness. But what movie was filmed here? I don’t want to be obnoxious, but it rhymes with Schalémie.

The whole purpose of my trip to London and Paris was to experience the Eurostar train journey, and what that ride looks and feels like. I’m telling you, because of this trip, I’ve decided to only travel by train from now on. Even at home. Only by train. Even in my neighborhood. Only train. Don’t try and tell me it’s impossible because I won’t listen! 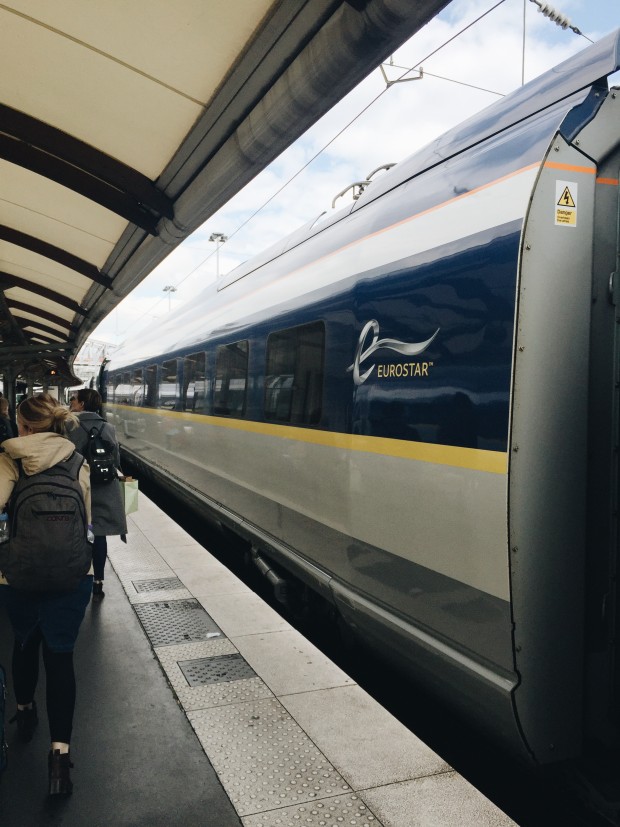 I love a good train station. It feels much more posh than any airport, can you agree? There’s something about walking the length of the train with your luggage that feels straight out of, well, ALL THE MOVIES. And you know how I feel about movies. Movies = trains. Movies = happy me. Trains = happy me. Wine on the train = very very happy me. 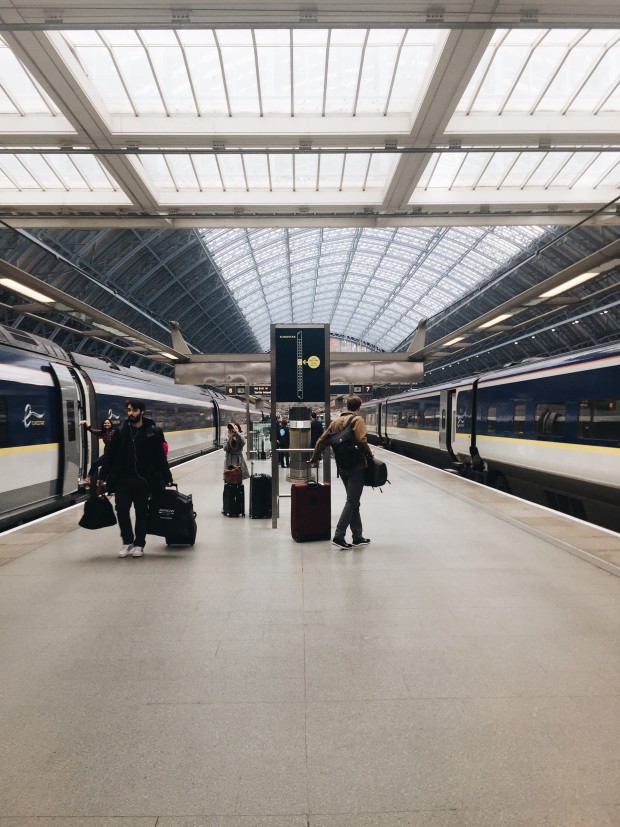 This photo ^^ is actually in the London station. My photos are slightly out of order, but I’m still a good person. After an intense cab ride to the station, telling the driver to pull over, hopping out and literally running the last quarter mile with 9237523 pounds of luggage, we made it to the London station juuuust in time to rest a bit in the executive lounge and chat with the staff about the changes they’ve made, and plan to make. Everyone was extremely friendly, and had such lovely accents. (it’s funny, after you’ve been around British accents for more than a day, you find yourself speaking in one! do you? …no, really? only me? oh.)

After a quick gin and tonic and handful of spicy nuts, we boarded the train and got settled into our seats (that face each other!) and began our trip to Paris. PAH-REE, you guys. 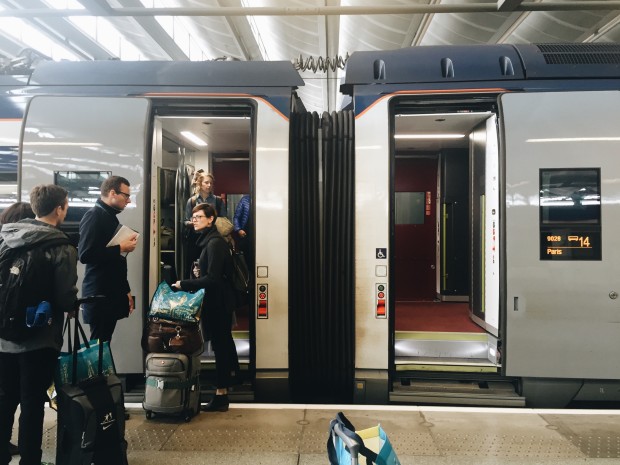 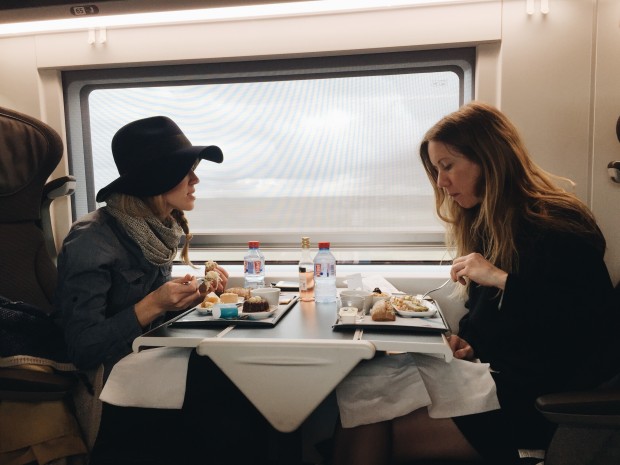 On my way to Paris I had a delicious smoked salmon dish with a dill cream sauce, bread and butter, and a little bowl of mousse. (and wine) (times three) On the way home I had a cold chicken curry salad with bread and butter and a little brownie thingy. (and rosé) (times six) (I keed!) (maybe)

It’s FAST, and smooth, and so freaking lovely I can’t even take it. I’m telling you, my new life is all train.

Now, let’s look at more photos of London and Paris. 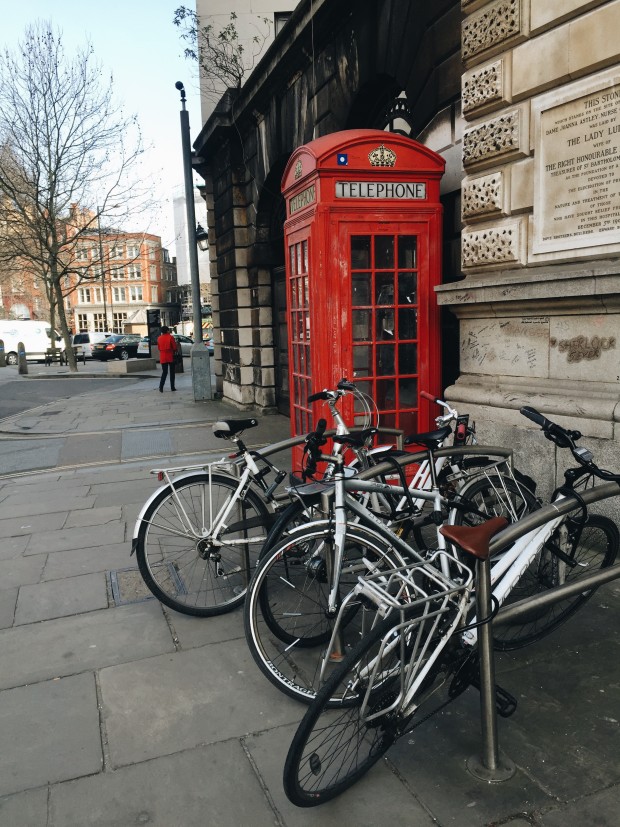 Telephone booths! I squealed like a tool when I saw the first one. They are everywhere. Ashlae took a photo of me on my cell phone standing next to it. Ha hhahahahah!  ha hah a. 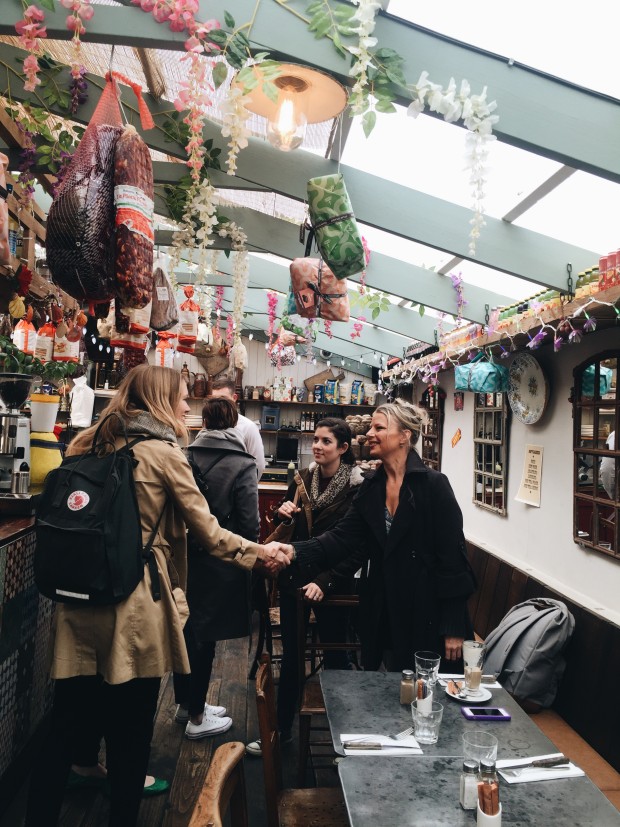 Did I mention the Gastro tour we took our first day in London? OMG – we started at this adorable little, uh, meatery? Is that a word? Lots of cured meats and bread and oils and stuff. We had our first round of cappuccinos and an INSANE zucchini frittata. And tiny little white trays of cubed pancetta wading in a fancy oil. It was ridiculous and I wept like a baby sloth. 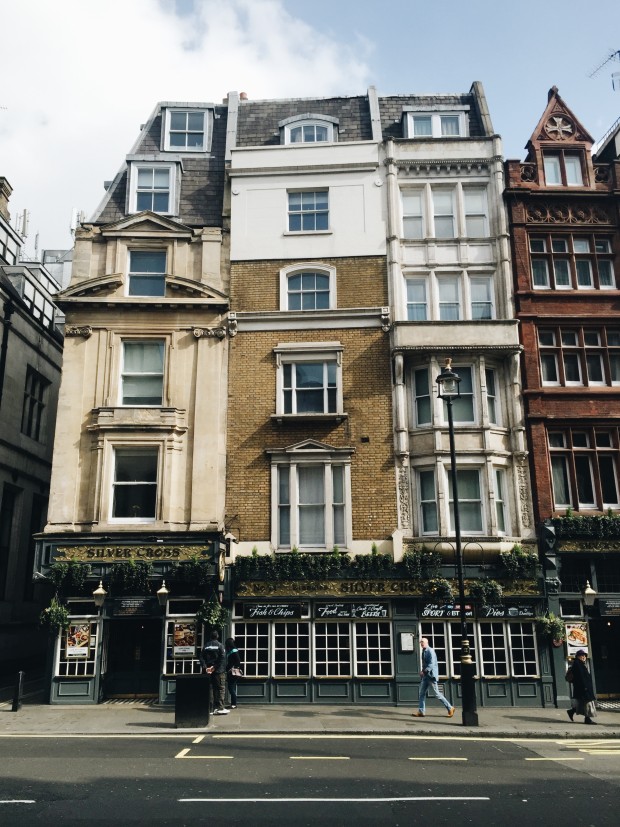 This building ^^ is riiiight down the street from Big Ben and the Palace of Westminster, and riiiight across from the National Museum. Not cute at all, right? So gross. I know. 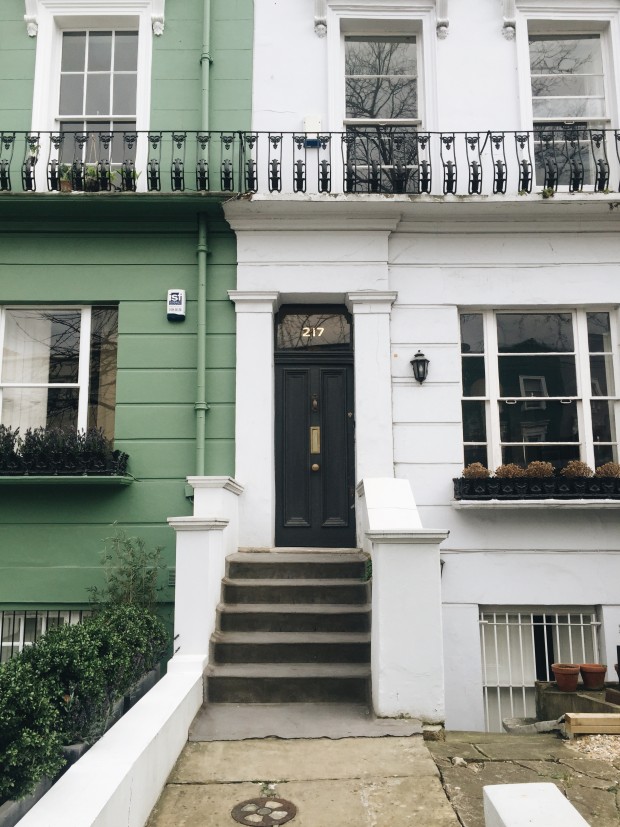 Speaking of gross, look at this flat front. I know I showed you one already a couple of posts back, but I can’t rightly help it. LOOK AT THAT. Almost makes me legit angry. 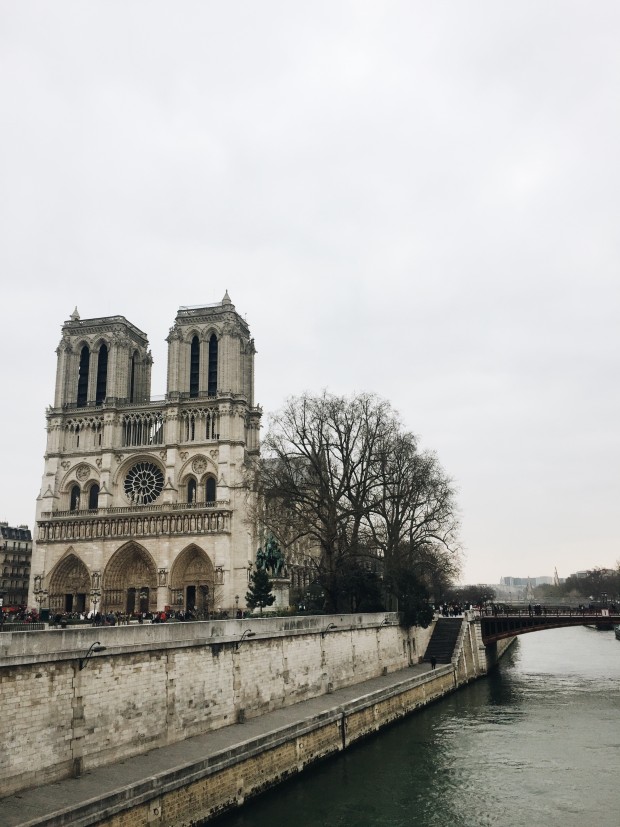 Back in Paris! Name that movie where the lady jumps off the top of the Notre Dame, landing on top of a little girl’s mother, leaving the little girl to retreat into her own wild imagination, later turning her into an avid do-gooder with a cute French bob and tiny waist. 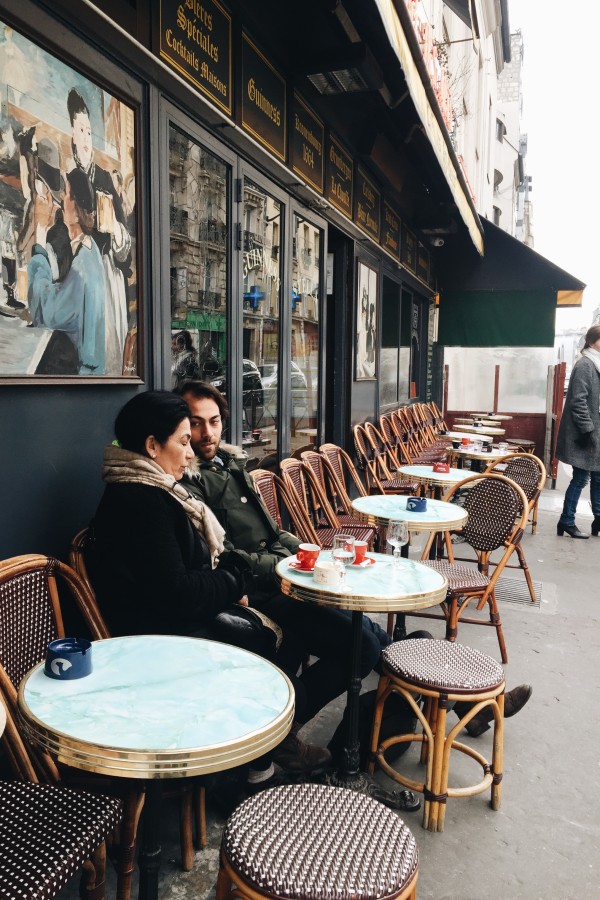 Oh! Here’s the French man we (apparently not so secretly) gawked. I know in this photo he looks like an America’s Most Wanted suspect, but you GUYS. When he stood up in his dark fitted jeans and expensive shoes and helped his aging mama up from her chair, we all melted down to the concrete like frickin’ taffy. 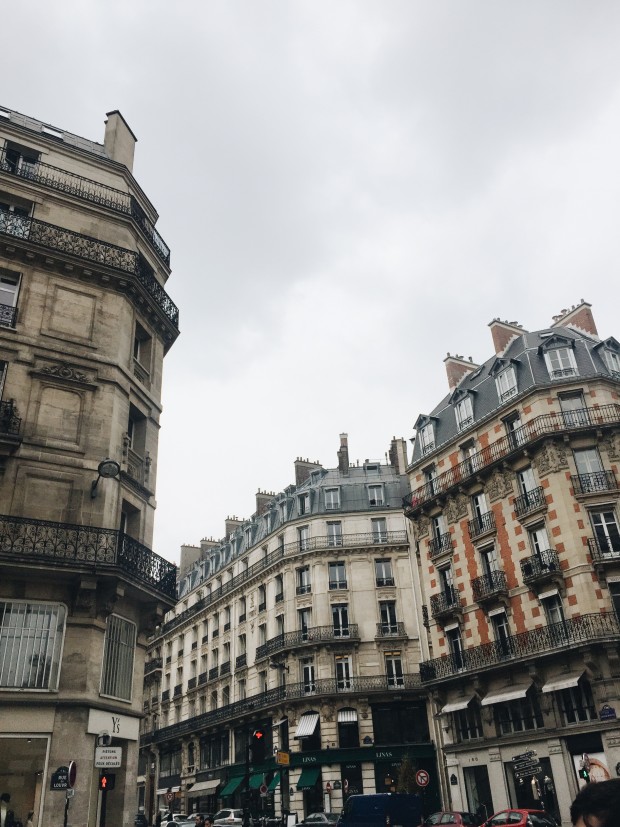 Oh, Paris and your stunning architecture at every.single.dang.corner.ever. 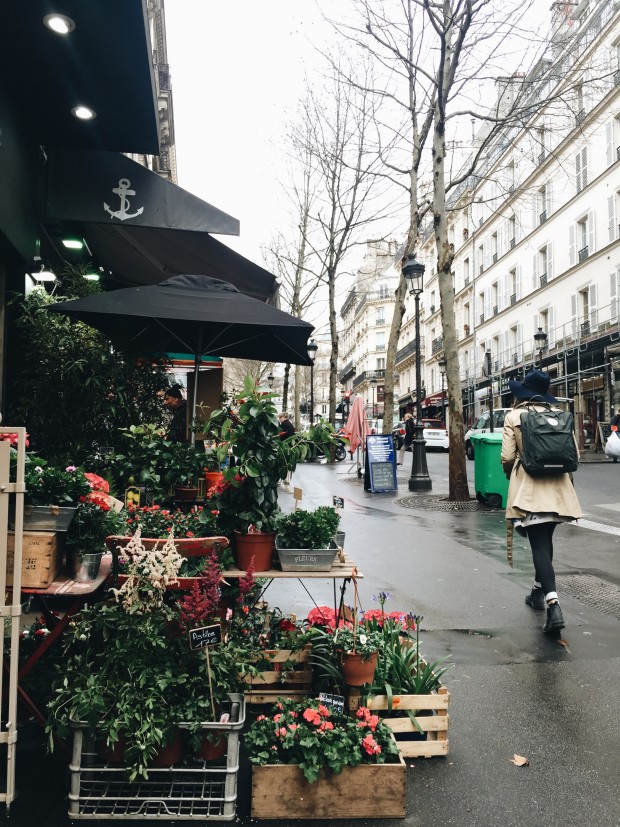 Oh, Paris and your cute flower stands at every.single.dang.corner.ever. 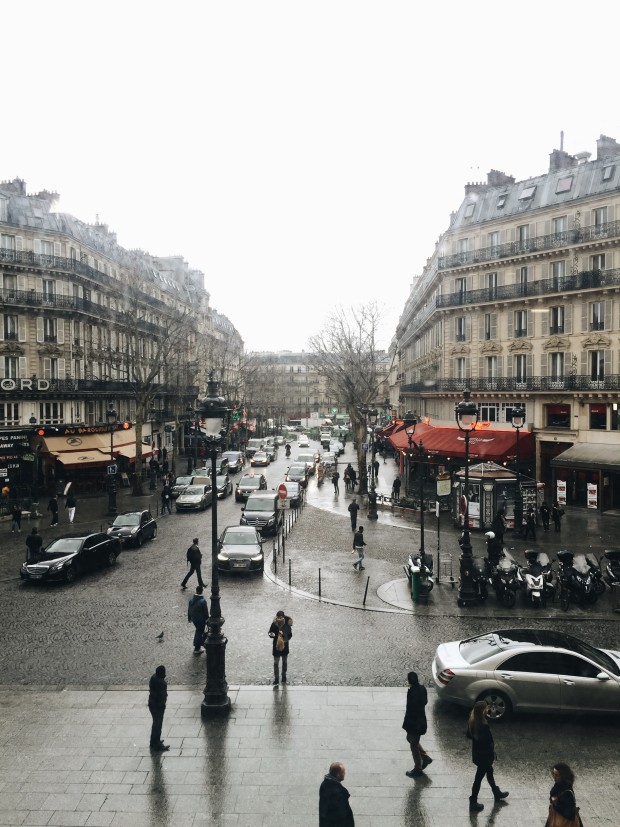 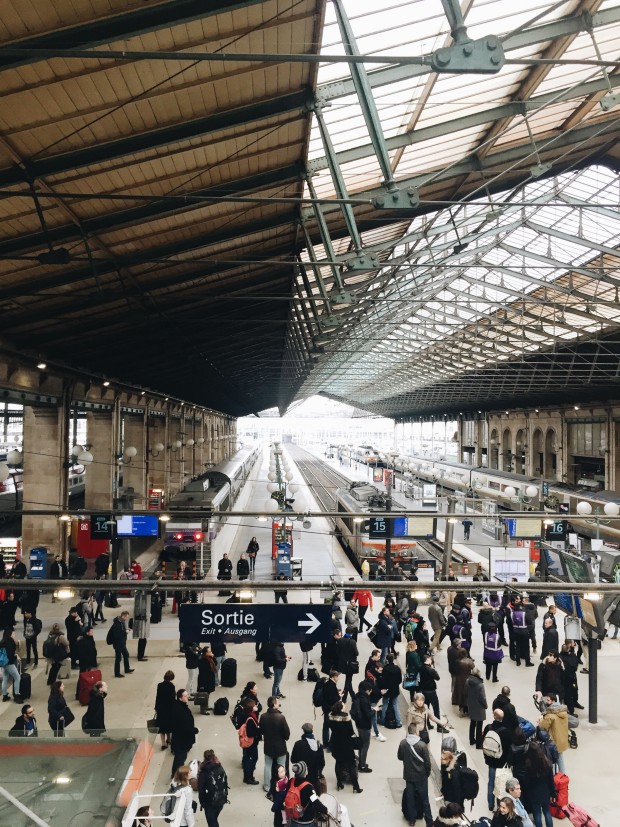 Back at the station for our trip back to London!

This trip. THIS TRIP. I’ll hold it dear as long as I live. (along with my copper pot, hollaaa)

Thank you deeply, Eurostar for hosting a bunch of loud American bloggers last week as we fumbled through our French accents and drank all of your booze. I’ll be back. (name that mov- okay I’ll chill.)

Now, you’ll forgive me if I slip more Euro photos into my Friday Flotsam posts for the next, um, 96 weeks, right? Coo, cool.

*this post and all my travel was sponsored by Eurostar. THE TRAIN. I seriously went on a train.

17 Responses to The Girl on the (Eurostar) Train