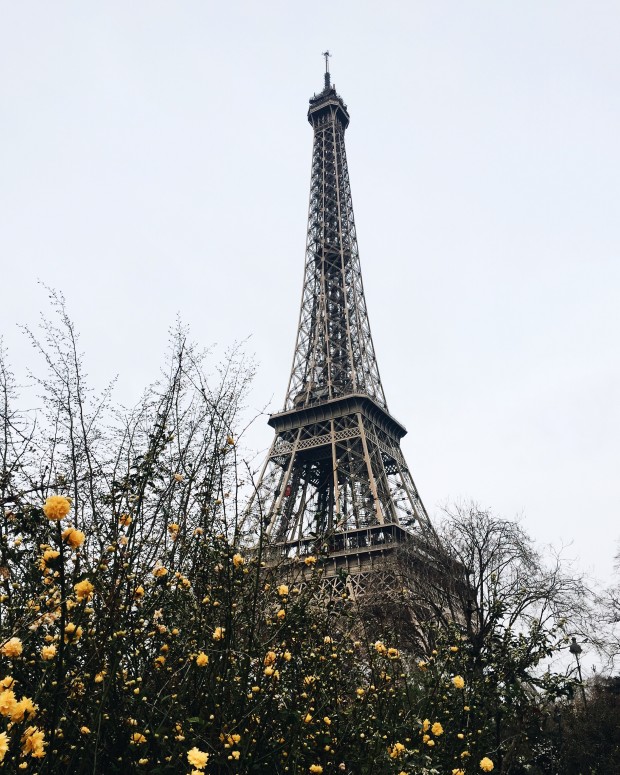 I’ll never forget hopping off the Eurostar train in Paris and being basically dumped out into the bustling streets of the city. I honestly couldn’t breathe. As in, it took my breath away. There was a slight chill in the air, beautiful fluid French accents swirled around my head from all angles. Police cars beeped as they whizzed by. The stunning cream buildings with ornate black wrought iron balconies swallowed us whole. I put my hand on the shoulder of one of our team leaders as she began to vocalize our plan. “Hold on…just one minute.” She watched my eyes look around, taking in the architecture, the scents (also known as cigarettes), the people, the LIFE. 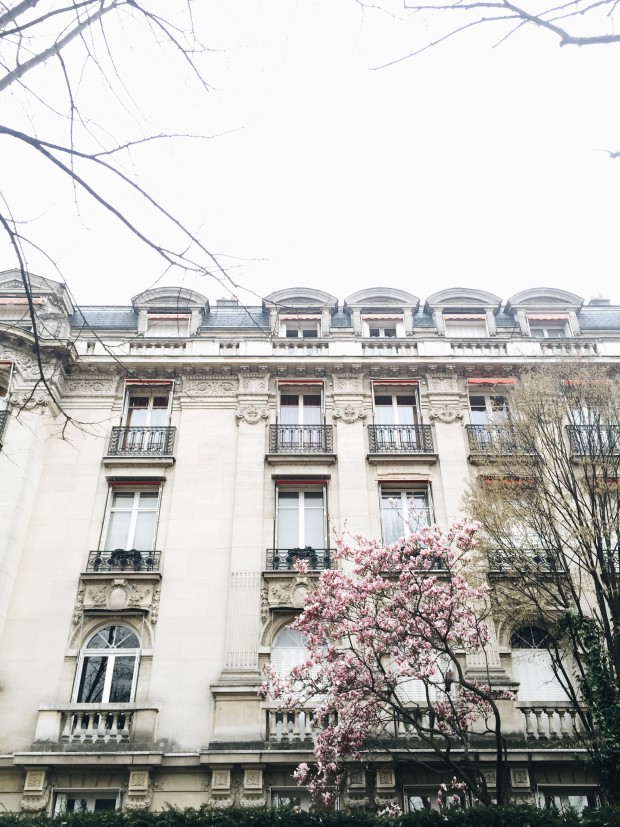 There’s just nothing in the world like Paris. This is all going to sound like an enormous cliché, because every person on this planet can agree. But it’s TRUE. It’s just so….so….FRENCH. And charming and darling and huge and scary but sweet and the paaaastrieeees.

And the French MEN. (p.s. I sneaked a photo of a French man sitting with his mom at a cafe. And she saw. And grinned at us. Do you want me to show you? I’ll totally show you! Later this week. He sort of looks murdery in the photo, but in person he’s waaaay more suave. Aaron doesn’t think I’m psycho at ALL.) 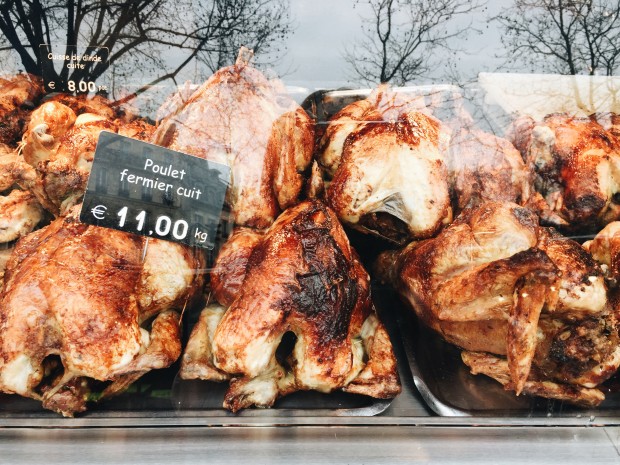 It’s like in Amélie when that one man walks down to the market every Tuesday morning and buys a roast chicken! You’ll be so proud of me, I only quoted Amélie 96.86235% of the time. 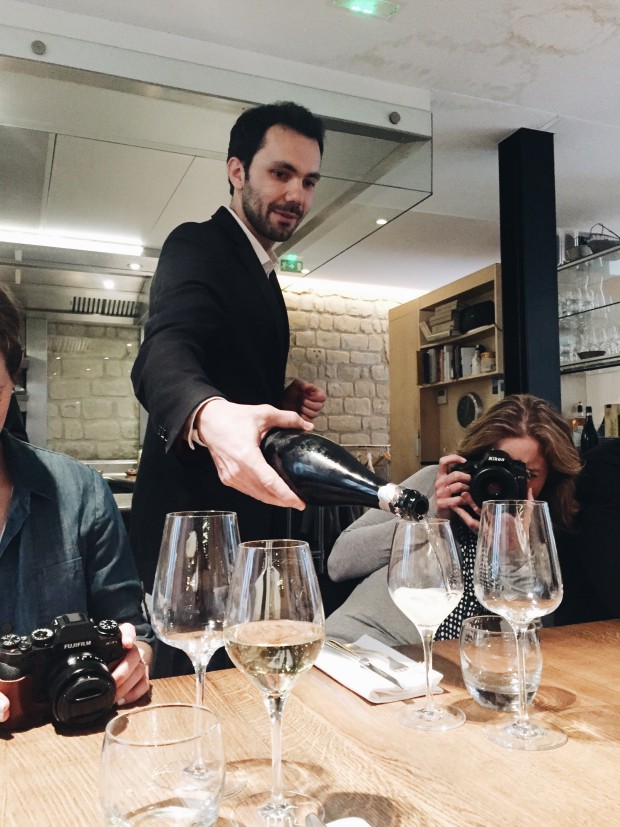 Oh! So we took this cooking class at Spring, this teensy tiny adorable restaurant super close to the Louvre. Holy freaking cow (no pun intended), let me tell you what we ate.

CRISPY VEAL head. (!!) Pigs feet, quail eggs with this gorgeous cured meat, and a drizzle of chive oil. (I snapped this part – did you see it?) We also had mackerel that had this crazy gelatin mix all around it, which sounds janky, but it was actually seriously good.

What else? Oh – bone marrow, a spiced buttery tray of razor clams (<–dear heavenly day), vanilla bean ice cream over this crazy cake. I can’t remember because they serve you 764 glasses of wine AT LUNCH. Alex, this dude who was with us was all, “This would normally be served at dinner, right?” And the server, “Non, non! Ehhhh lunch. Lunch on ehhhh Sunday, wiz fameelee.” 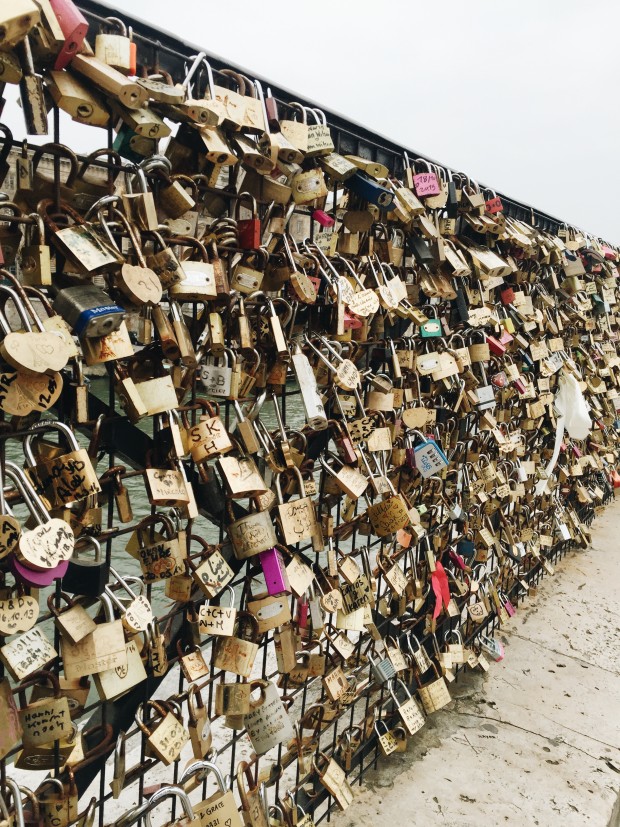 Saw the locks! There are so.many.locks. I wish I could remember the story behind the locks, because some are allowed to be there, and some had to be taken down. There was a certain bridge where all the police officers grumbled in French as they removed lock after lock after lock. And then on another bridge they were left alone. Can you remember why? Je ne sais pas, dude. 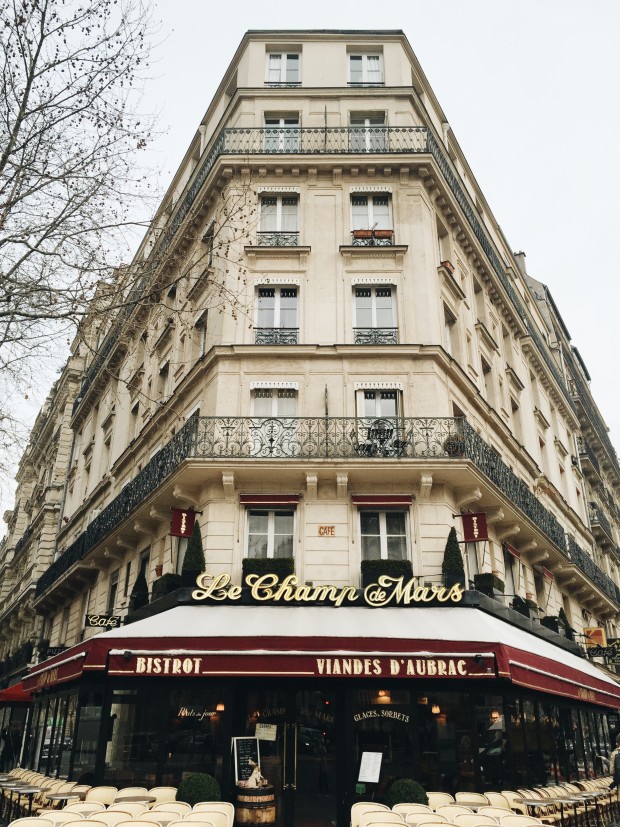 Every single intersection basically looks like this. And you want to sob at the cuteness. And drink 15 cappuccinos in one setting. Which is pretty much what I did. 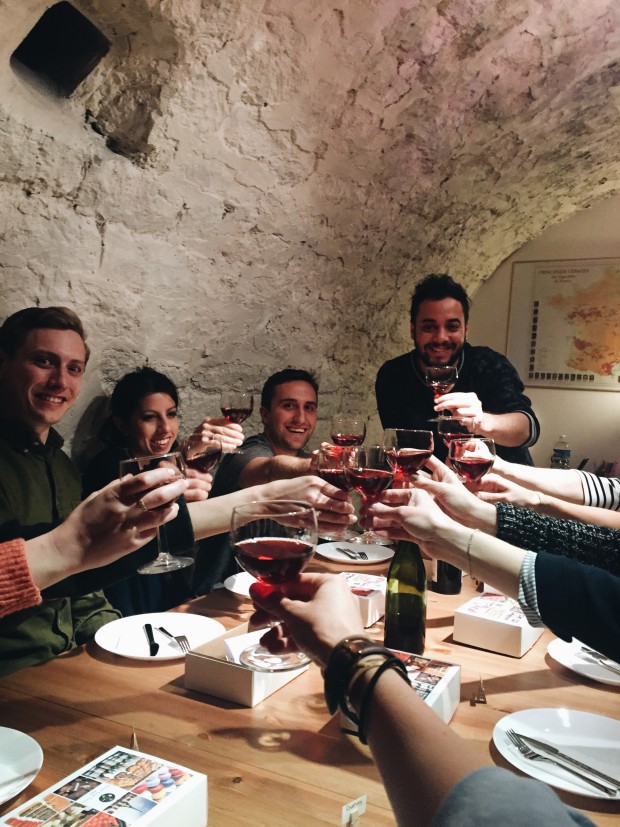 So thiiiiiis was cool. Our first night in Paris we took a Secret Food Tour! Which meant we followed our French food guide from market to market, picking up ingredients as we walked, ending up at this underground cave, where we gorged on all sorts of delicious pates, cured meats, different cheeses (some soft, some hard, some stinky), the best baguette in ALL of Paris (the sign on the door said so), macarons and chocolate, and all the wines. It was FABULOUS. Plus we were in a cave, so there’s that. 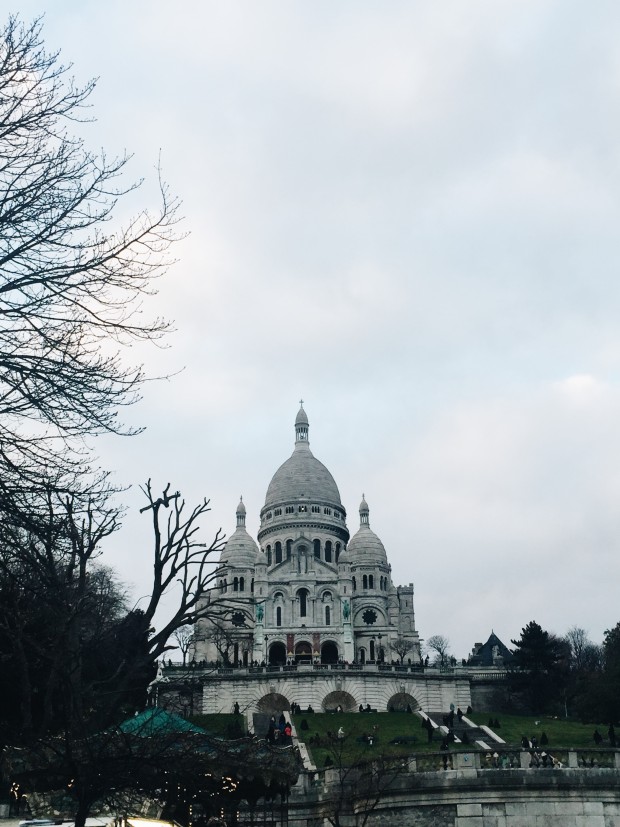 The Sacré-Coeur! This building is absolutely breathtaking, as they all are in Paris. We didn’t get a chance to walk the steps, as we were already deep into our Secret Food Tour, but just looking at it was humbling enough. Remember when Amélie ran up to the top trying to get dude’s bag back to him!? I’ll only ask this once. Je prometes. 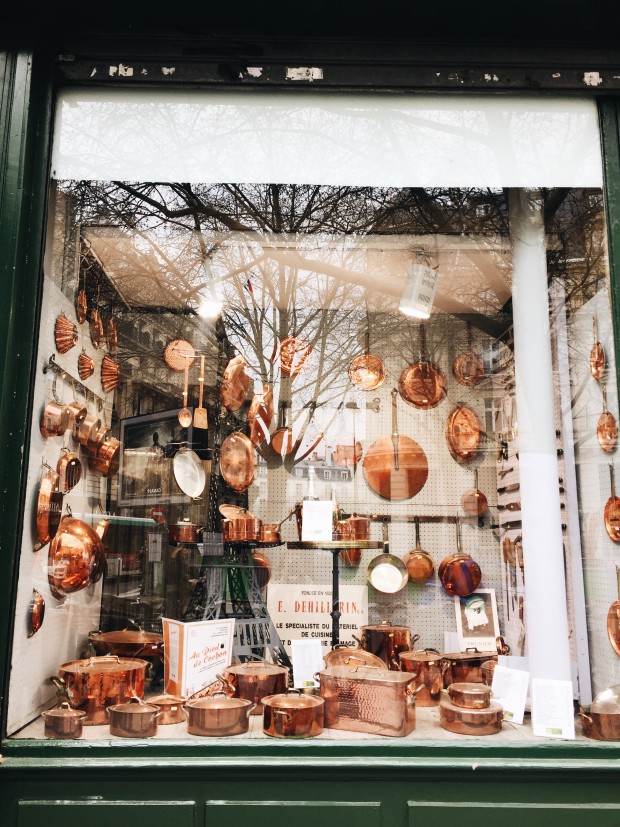 Okay, one of my most favorite moments of the trip was being with other food bloggers who IRRATIONALLY OBSESS OVER COPPER. Julia Child style.

Ashley, Ashlae and I stumbled upon theeeee kitchen shop of all kitchen shops, nearly peed ourselves over all that copper in the window, ran in and all bought a pot! And I poached an egg in mine yesterday for Easter brunch. And it was dang delish. 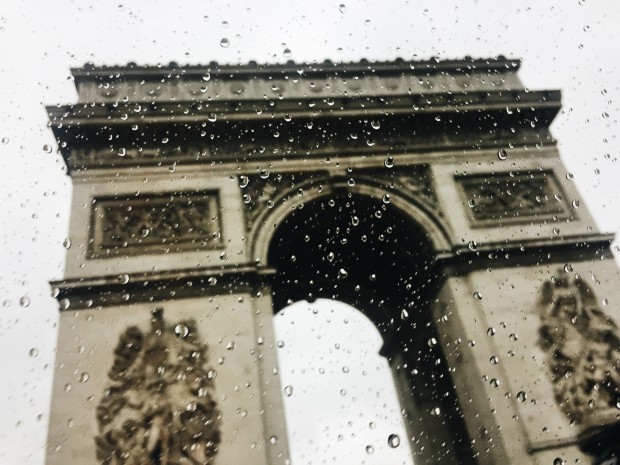 This shot is from our rainy Uber car ride window on the way to the Ladurée for a VIP breakfast. Hi, Arc De Triomphe! You’re massive and scary and gorgeous and I like you. 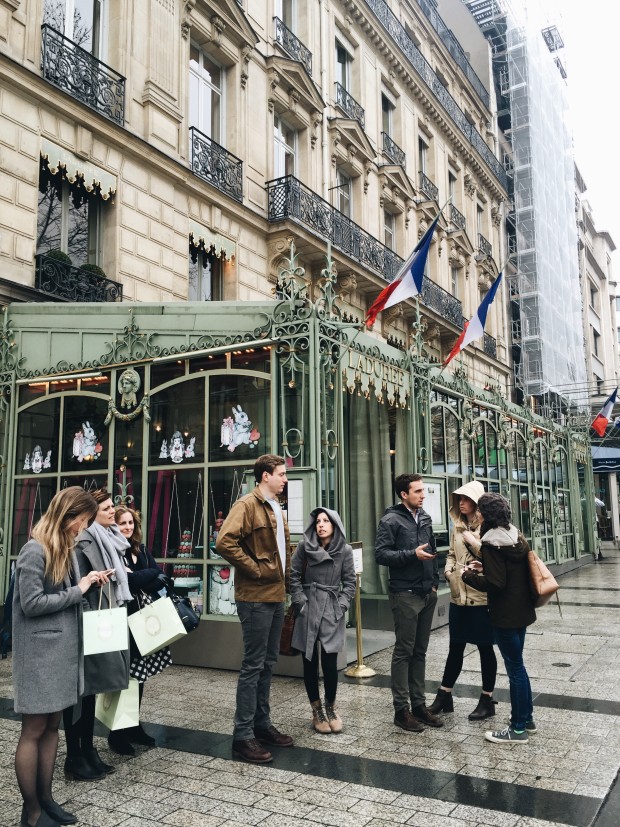 Post all the pastries and macarons. But can you even get over that building? Everything has such detail! It’s truly moving and slightly terrifying.

This ^^ is part of my group. I absolutely LOVED every single person that went. We were all so lucky to get along with each other, and actually enjoy each other’s personalities. I think. Actually, don’t verify this with them. 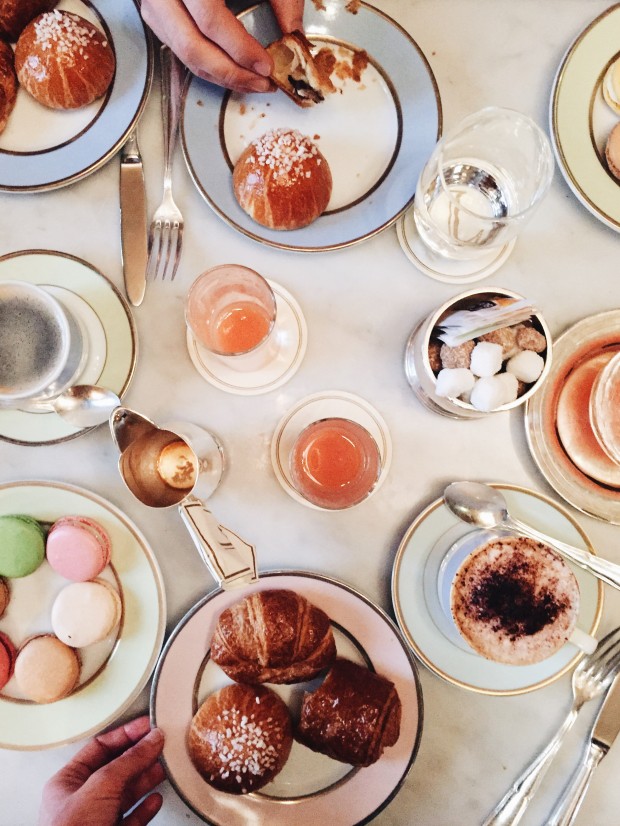 Can’t post about Paris and not show you food. This was our breakfast at the Ladurée. I’m normally a savory gal, but I inhaled those pastries and cappuccino like whoa. (the light was a little funky in there, so excuse the weird photo. FRANCE.) 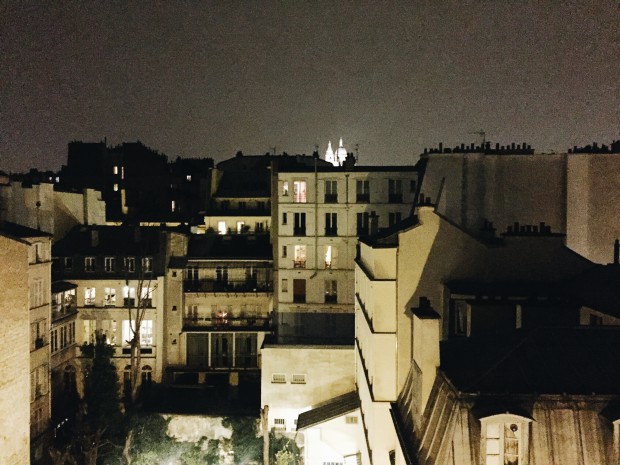 This viewwwww. This was our last night in Paris. We sat on Eva and Jeremy’s hotel balcony, shoveling chips and cookies into our mouths, but apparently we needed more food, after two plates of pommes frites at the Amélie cafe. WE WENT TO THE AMéLIE CAFE. And I sobbed. I’ll show you a photo of that later this week. It’s embarrassing.

That’s the Sacré-Coeur back there! Remember when Amélie ran up the steps trying to give the bag back to the du!?- right, right. 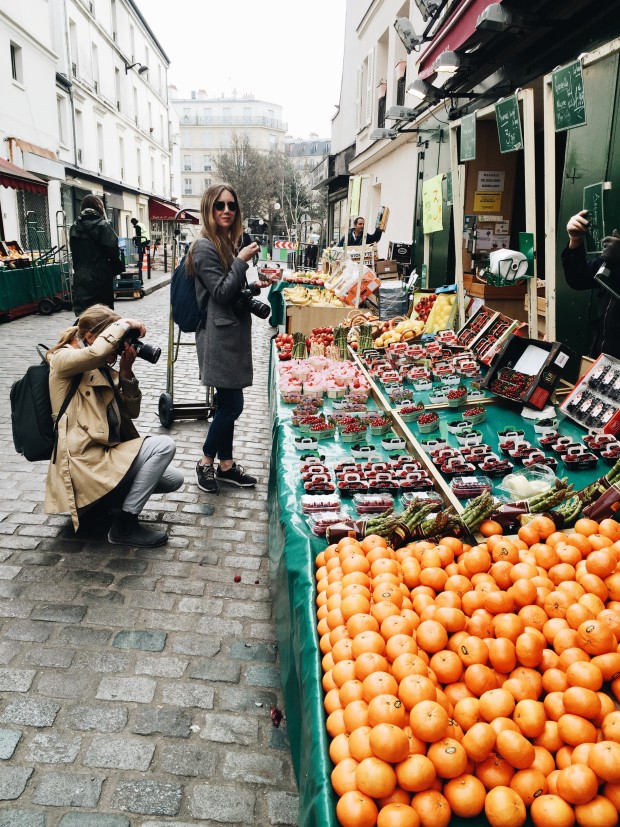 This was pretty much what we did everyday. Walked, took photos, sampled food, drank, and walked. And it was mind-numbingly wonderful.

Okay, so it’s impossible to show you Paris in just one post, so I have oneeee more recap post later this week, showing you a wee bit more of Paris (!), more of London (!!), and the TRAIN EXPERIENCE. Because Eurostar is completely amazing and you need to know more about it. So in a few days, we’ll hop on the train and I’ll show you exactly what it’s like. Coo? Coo.

One last very important question and I’ll let you be::: How do I make a cappuccino at home?

*This post and all of my travel is sponsored by Eurostar. The train. I WENT ON A TRAIN.

*also, I have a lot more travel photos on my IG page, in case you haven’t seen them!