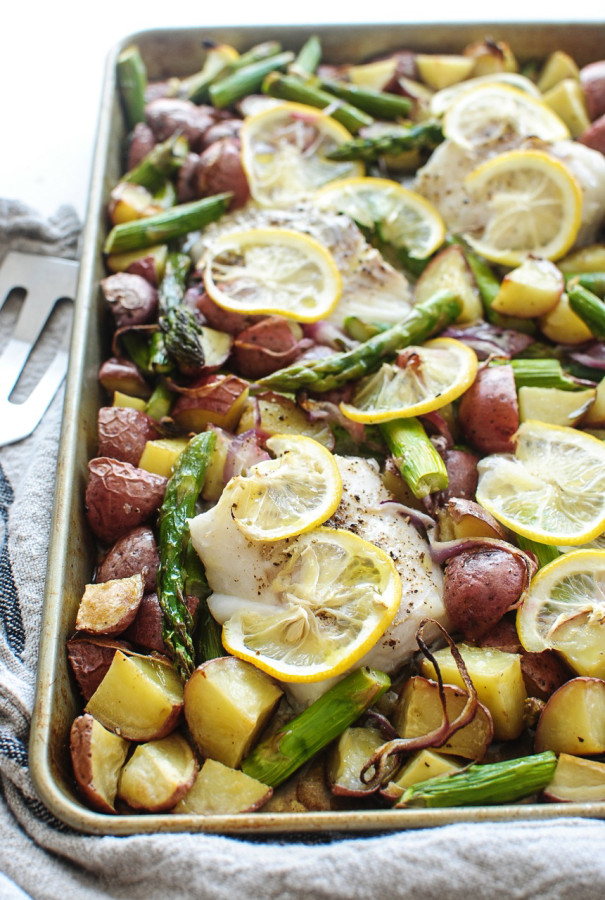 I know it’s just FISH BLAH BLAH, but you guys. This is seriously my new favorite way to eat the fishes.

It’s not a NEW way of eating fish per se. I ain’t reinventing the wheel. But hark it- when you space out the roasting process into three even chunks of time, you are left with perfectly cooked everything, including a fun little pond o’ lemony butter underneath. And you know how we feel about fun little ponds o’ lemony butter dripping from our faces. 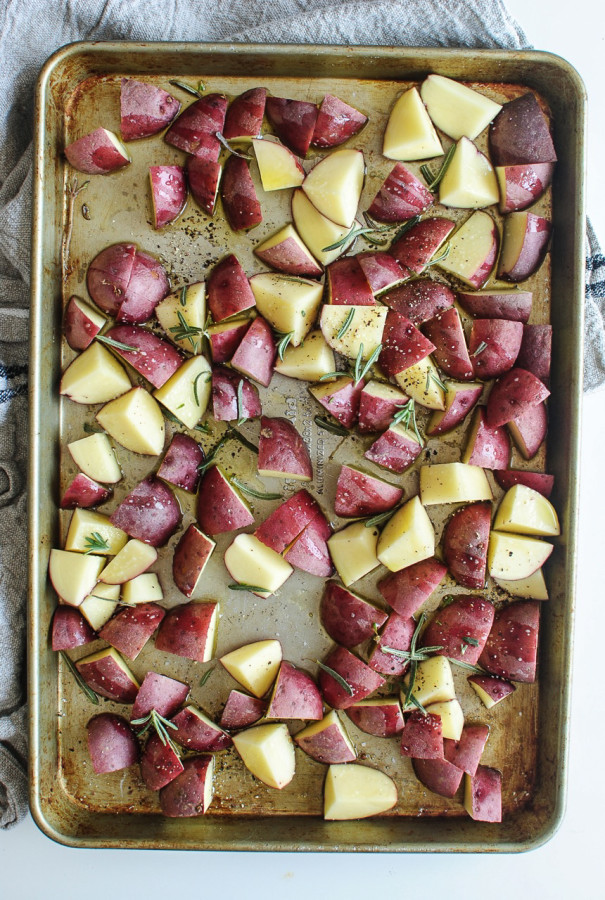 Step one: the pertaters. I chose red, because next to that white fish, we need a little color, man! Just cut ’em up, drizzle with oil, and sprinkle on some salt, peppa, and rosemary. (but not her baby.)

Slide her in a 400 degree oven for twenty. The end. 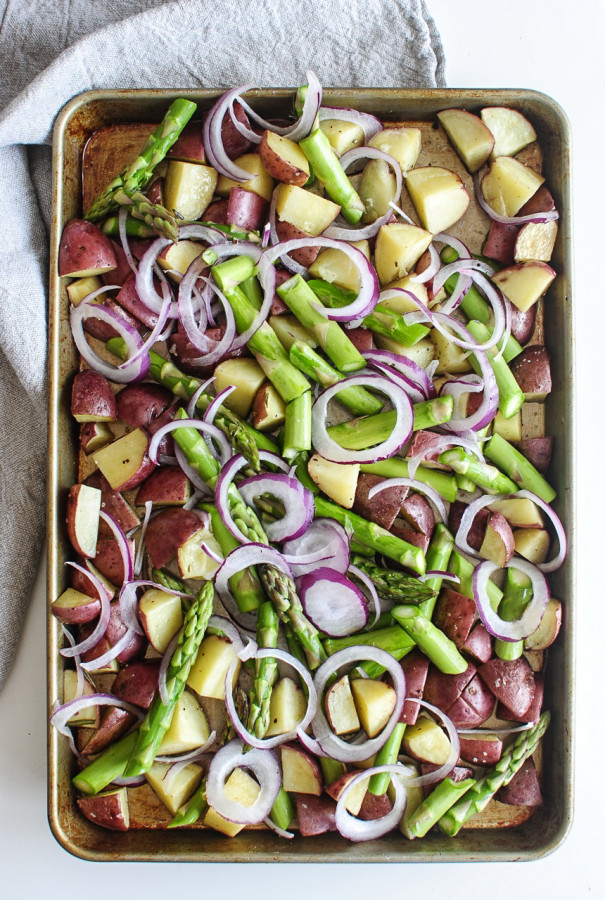 SIKE. Step two: Add some veggies. One bunch of asparagus, ends trimmed and cut into 2ish-inch pieces, and some thinly sliced red onion. Layer layer layer. Scoot some stuff around if you have to. It may start to feel crowded, but that’s okay. Just pretend they’re at their favorite rock show, and this baking sheet is the mosh pit.

Back in for twenty. 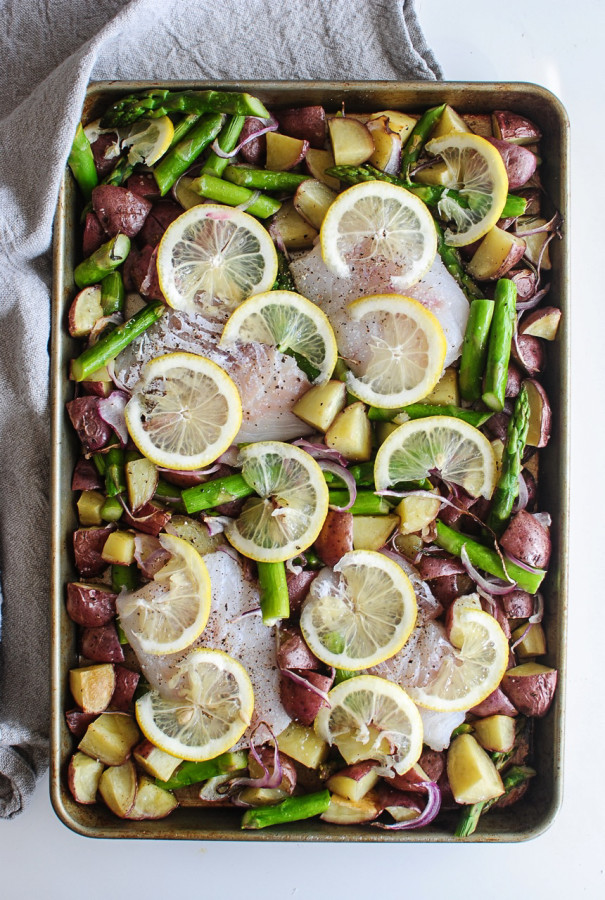 Step three: in goes the fish! Scoot and nestle, scoot and nestle. You’ll make it work. Once you get the fillets all nestled in, sprinkle each one with salt and pepper, and layer the whole pan with thin slices of lemon. AND TINY BUTTER CHUNKS. Sorry to yell. I nearly forgot this part! Cut up like, two Tbs. of butter and sprinkle the chunks on top of everything. I forgot to photograph it because I’m a raging idiot.

Back in for the final twenty. 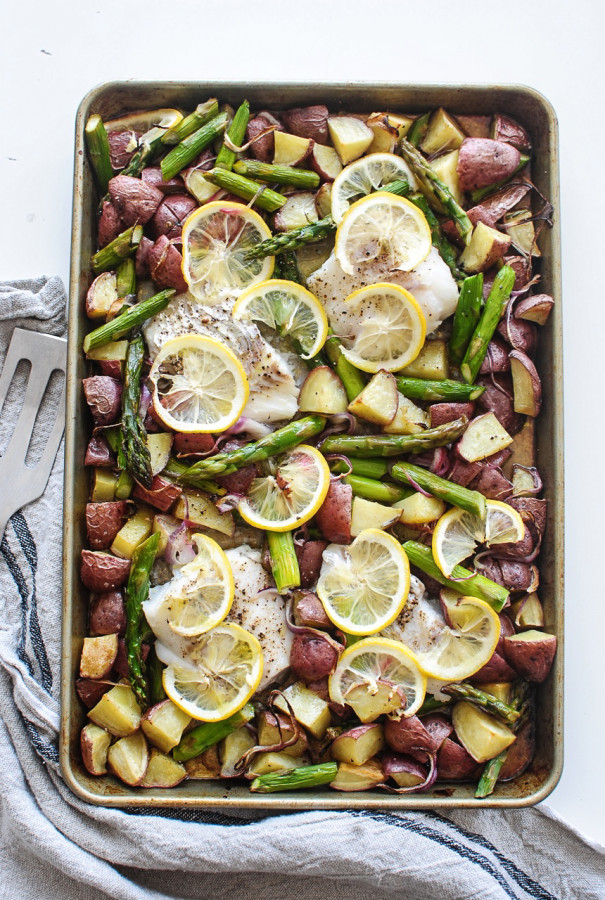 The potatoes have had a full hour in the oven, so they’re perfectly tender and wrinkled and a little crispy on the outside and your eyes will sob forever.

The asparagus is tender and lemony, the onions are pretty much caramelized and glorious. And the fish – my gah. Flaky, buttery, lemony. It’s almost stupid.

You could even add a little garlic powder to the whole thing during the final twenty minutes! Try that and let me know exactly how much your heart breaks over it.

Be sure and spoon out a little of the pan drippins over each plated meal! I say “drippins” with a southern lisp to drive my friend Ashlee mad. She will literally lean over and moan with utter disgust. I love it. 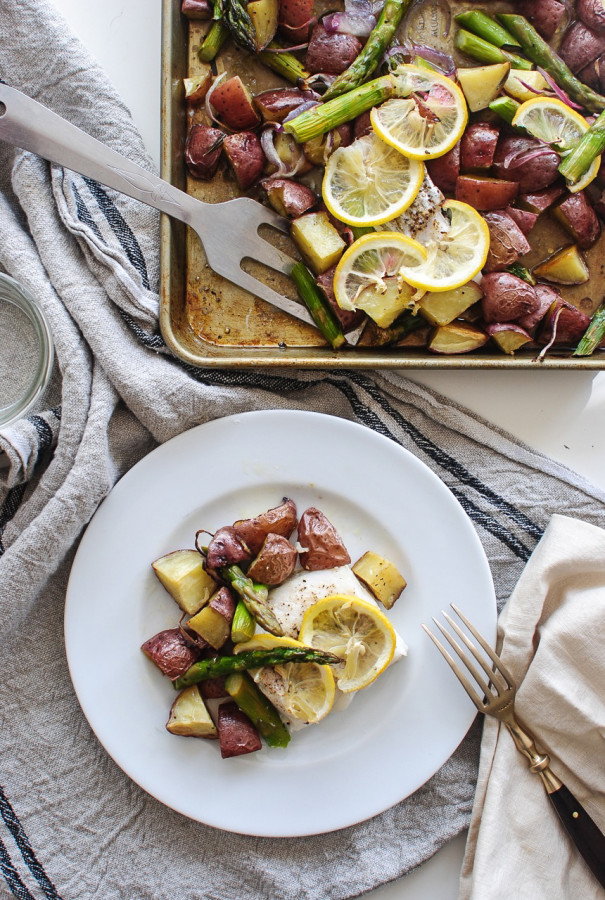 Simple and Healthy! Look at you.

Baked Cod with Potatoes and Asparagus 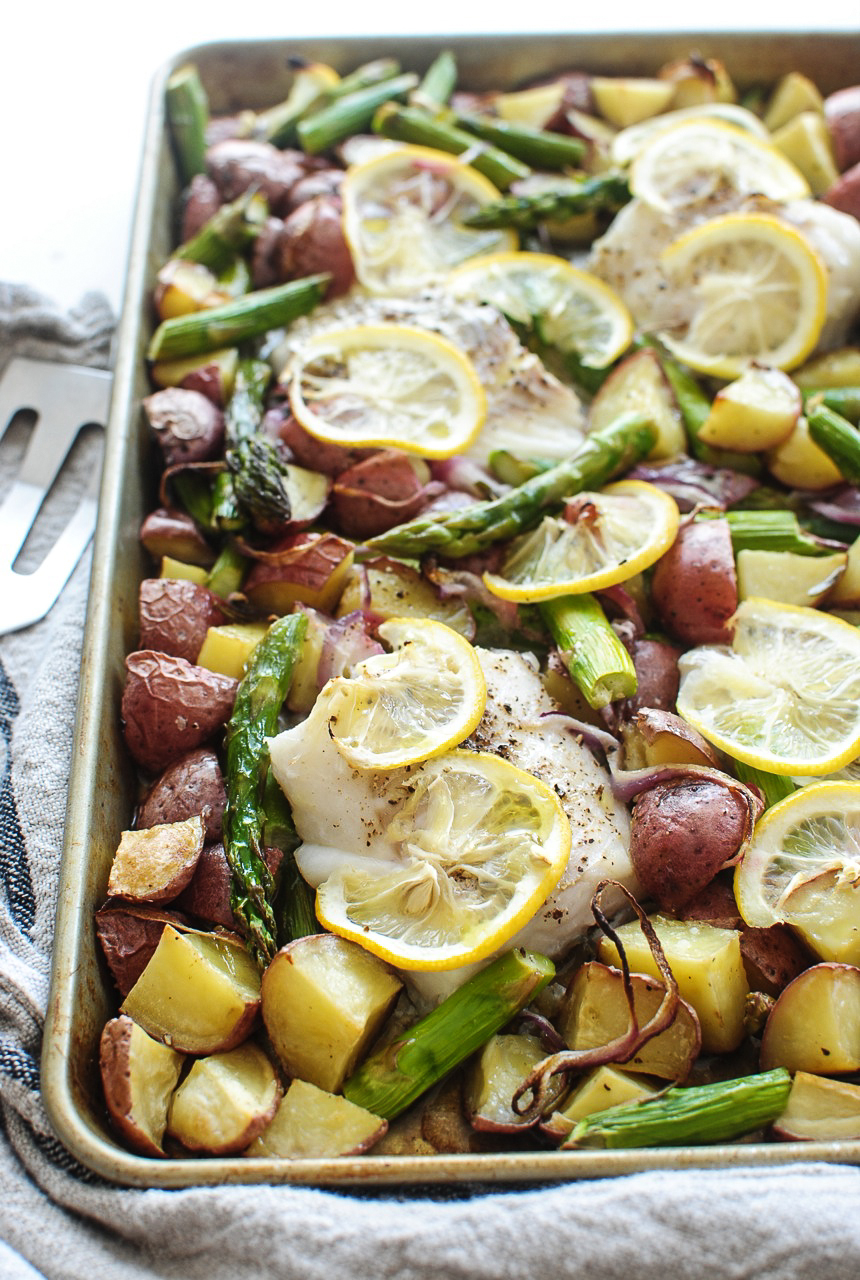 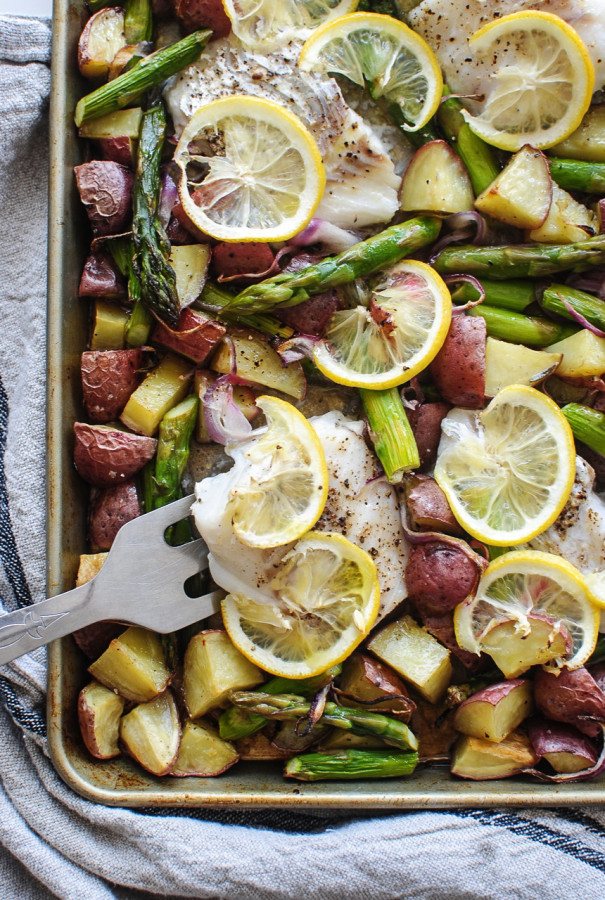 “Now I stuff you with bread, It don’t hurt, ’cause you’re dead! And you’re certainly lucky you are!” (<–no really, name that movie.) 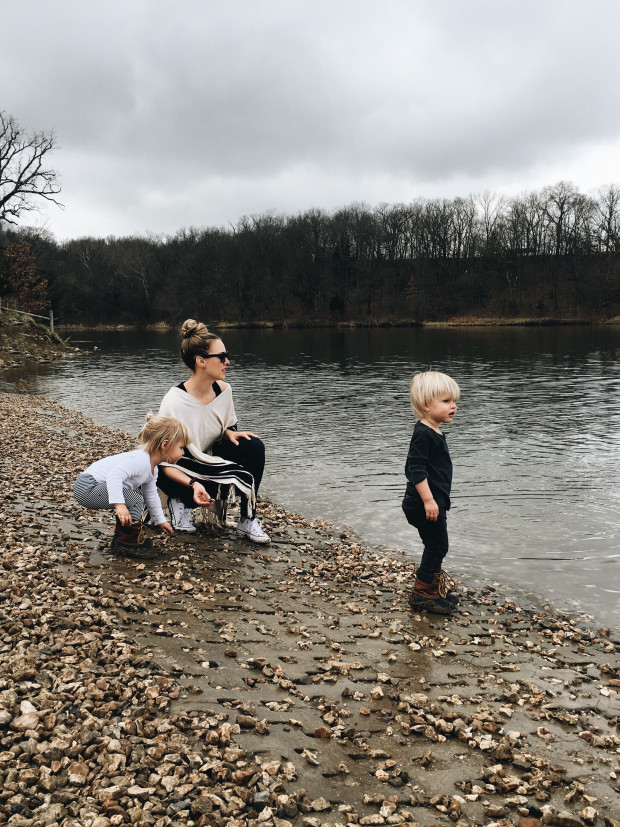 One quick thing! (I’d normally include this in Flotsam, but this week is different. OoooOOOOOooo.) I’m beyond flattered to be featured today on Oh, Mama as their weekly crush! So sweet of them. Be sure and peep it if you have a sec! ^^^Here I am teaching the grems how to skip rocks. Also known as: looking for floating dead bodies. I WATCHED DEXTER, I KNOW.

26 Responses to Baked Cod with Potatoes and Asparagus