We’re about to get so crispy right now.

Do you know the difference between a crisp and a crumble? Because I didn’t, and totally had to look it up because I kept calling this a crumble when I was making it. And it’s not.

A crumble has flour! A crisp – oats. NOW I’M SURE there are loop holes in the universe where one toggles over into the other for no other reason than to make us all crazy. But that’s what I learned from the information super highway and I’m sticking to it.

But this one has pistachios – whaaaaaaaat. (my hands are slanted in the air like a skater kid from the ’90s.)

I don’t even know WHY I wanted pistachios in this, other than the fact that anything with a salty crunch is my LOVE LANGUAGE. But it just makes it. The pistachios. And buy them shelled because I can’t have you cursing my name. I already have to wash my hair today, so.

Millions of peaches, peaches for me.

Millions of peaches, peaches for free.

(you had to see it coming.)

So I didn’t boil these first. Which might be a cardinal sin in the world of crisps and crumbles and cobblers (oh my). But they were so perfectly ripe and soft (and okay, I had zero patience and needed this in my face immediately) that I skipped the boiling all together! I’m sure they’d have been even softer post boilage. But these were fine. Really. Just make sure they’re SUPER ripe and soft. Have I said the word soft enough yet? Geez.

Then liiiiightly toast them in a little skillet for a few seconds, until you can smell them. Until the scent wafts up through your nasal cavity and punches you in the soul. 30 seconds. 45. Yep.

And oh! I forgot to photograph the oat part. It’s honestly just oats + melted butter + brown sugar. Then sprinkle it over the layered peaches (that you’ve also spritzed with lemon juice!), followed by the chopped pistachios and lemon zest. And omg.

But I need to tell you – this is much lighter than a traditional crumble. Since there’s no flour, it’s a lot looser. Not as dense. So if you need that creamy cobbler-like feel, maybe add another two Tbs. of butter to this.

But ALSO, once you add ice cream to the mix (which you obviously will because you’re a human and not insane) it’s melts all in with everything and it’s PERFECT. If you eat it sans ice cream (what kind of animal are you) it probably won’t satisfy you the way you want it to.

What’s weird is that this crumbles, but it’s a crisp. Ha! I don’t get life either.

The peaches have wilted in the heat, but still have a slight heft right in the center that screams SUMMER FACE LIVING OMG Y’ALL (<–just like that), and the pistachios, with their salty crunch that marries up with the brown sugar in the oats STOP. Perfection. Can’t. Did. 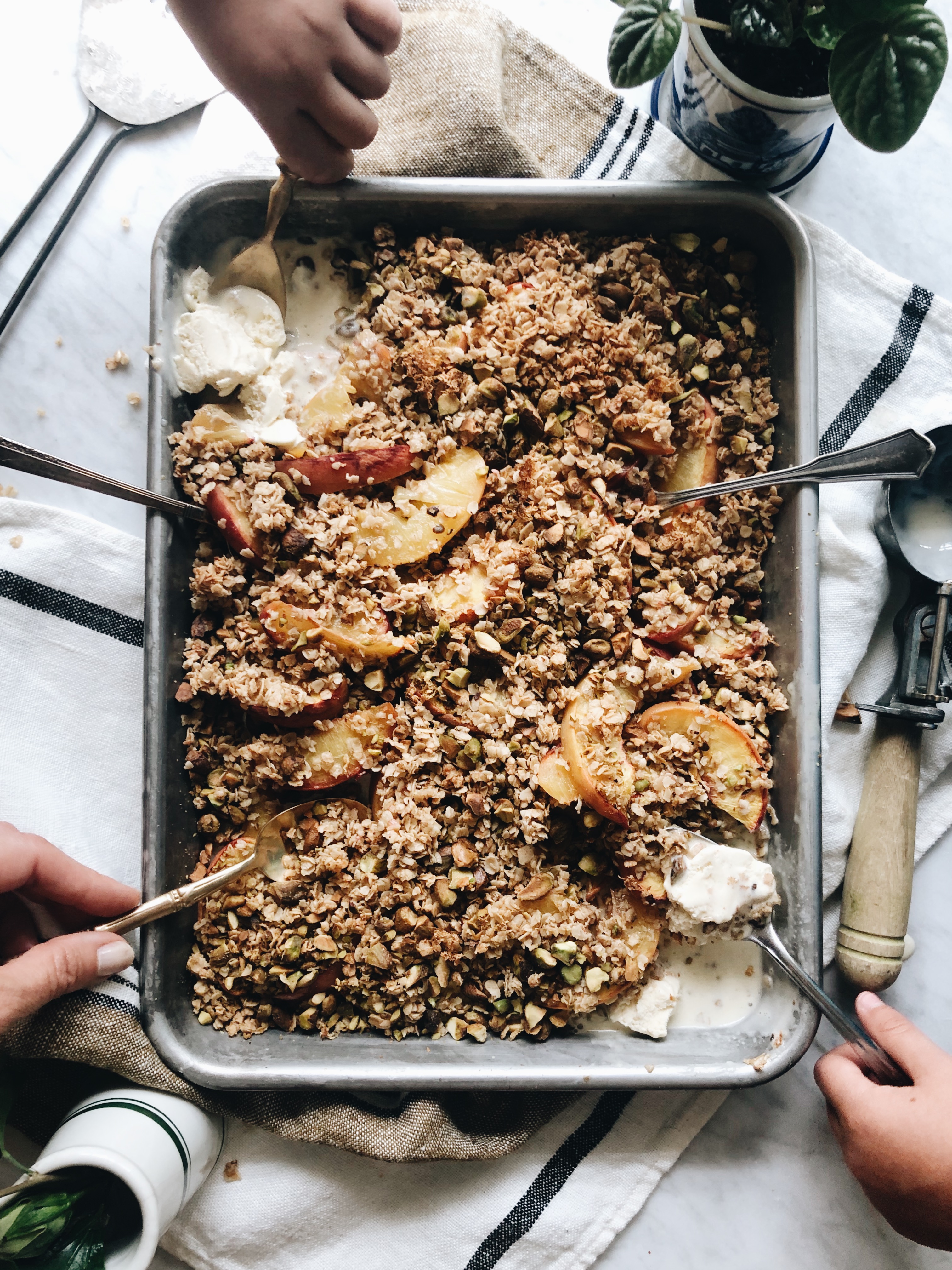