I’m calling it a gratin because of the layering. And the cheese. You can call it a bake if you want! Or a gratin. Or just awesome.

This is one of those side dishes that you’d probably have anyway, but not like this. And I want you to have it like this. Because this is plain ridiculous.

It’s like pizza, with no carbs! (<–saddest sentence ever.)

Let’s break this down.

Six ingredients. That is all. Two of which are veggies. And two of which are cheeses. This is called LIFE BALANCE. Once needs equal amounts of cheese and veggies to live fully and happily. Amen.

Slice up the squashes. I used a mandolin for this, but if that freaks you out, just use a sharp knife and get them as thiiiinly sliced as possible. (a mandolin is FAST though. just sayin’. okay bye.)

Then you’ll ladle a few Tbs. of (jarred, homemade, whatevs) marinara along the bottom of a gratin dish, or a baking vessel, or a shallow canoe, and start overlapping the zucchini and the squash like whoa. And here’s the thing, you can sort of wiggle the layers to make room for more, if you have less room in the pan than you thought, or spread them evenly in the pan, if you have extra room in the pan. Just wiggle it. Wiggle it good.

OH – the garlic. So you’ll grate it (or mince it like crazy) and just sprinkle it in between the layers of veggies. All willy nilly. Nothing has to be perfect. Nothing ever is. NOTHIIIING EVER IIIIIIS. Is that a song? I feel like it’s a song. It should definitely be a song.

Brush some sauce in between the layers, too. How about a sprinkle of salt? There we go.

So once you’ve layered and overlapped and sung your heart right out of its cavity, arrange those little mozzarella balls over the top. I THINK these are technically called ciliegine (got ’em at Trader Joe’s), but anything around this size works. And then a good sprinkle of parmesan cheese right over that!

You can see the direction that your life is about to take, can’t you. You can.

And that would be it, Chachi. Would you just look at that.

But hark! And hark hard. Let it sit about five minutes, which I know is a ridiculous ask, but let it sit only because you want that sauce to cool and set a little. We don’t want runny vegs, brah. And I know you’re like, “But we barely put any sauce in that!” You’re right. But still, it will be a wee runny if you don’t let it sit for a sec. The end. Goodbye.

I LOVE THIS. It’s light, but satisfying. You’ve got color, but also comfort. Nutrients, but in a party.

Here’s another photo of the bottom part because I just liked it. I like seeing the slightly shriveled edges of the squashes just peeeeeeeking out under that baked sauce and cheese, UGH. So delish.

And you know what! If you want layer cheese IN WITH THE VEGGIES, by all means, go for it. I was just trying to keep my husband from drawing up divorce papers, so I went with the top blanket. But you do you. 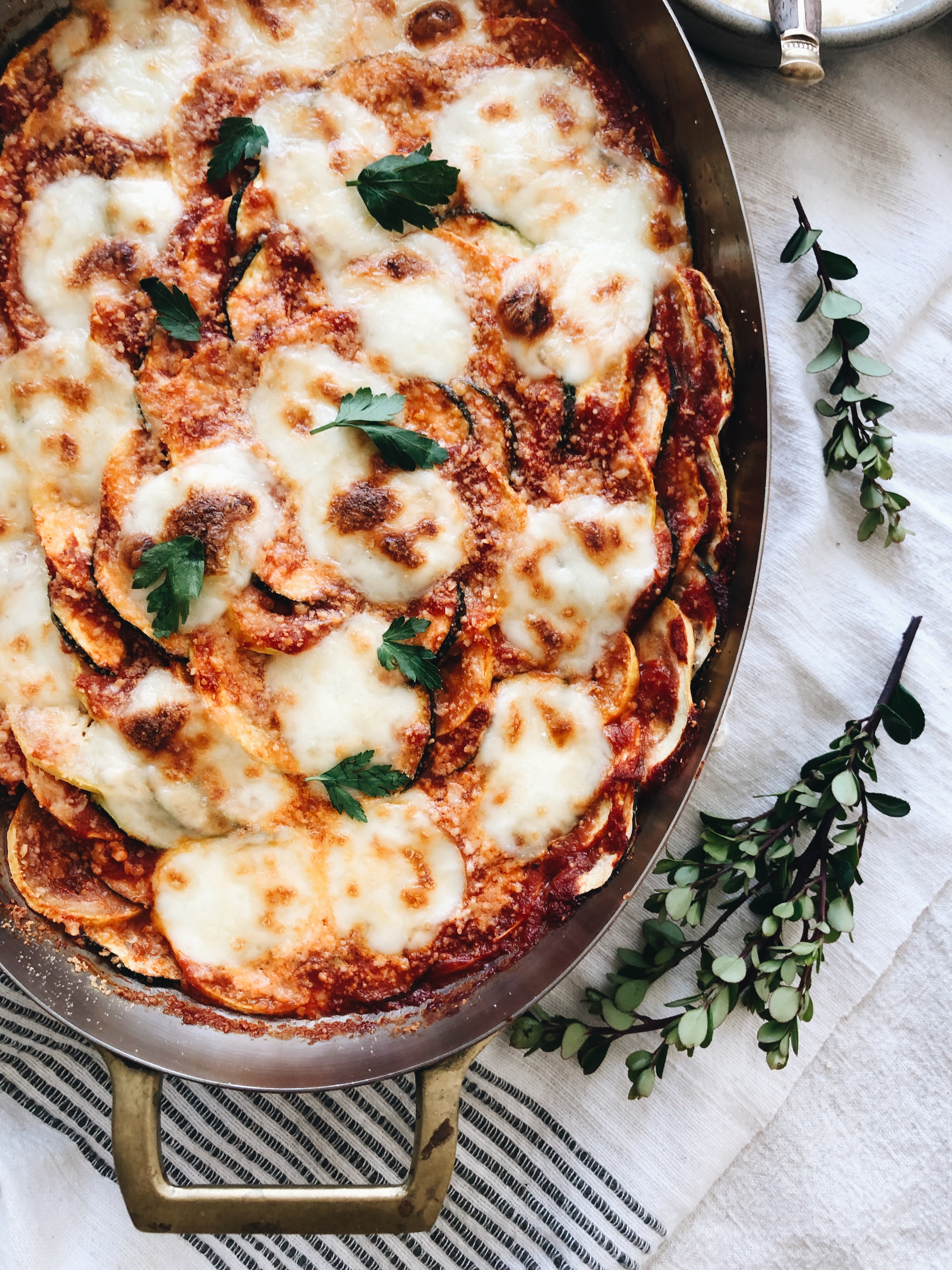 Serve this at a pot luck and watch everyone just straight up lose their ish.