I put roasted okra in a creamy Cajun pasta. You’re either going to high five me, or somehow forgive me. 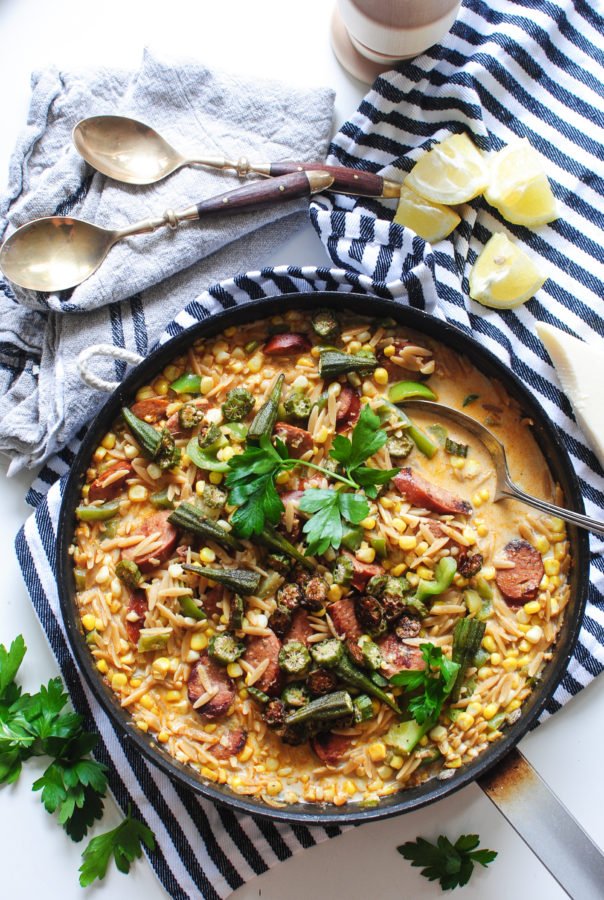 I get extremely squeal-y giddy at this time of year. School is back in sesh (<–not sorry), football season is lurking around the corner (<–don’t really care for the sport, just the overall spirit vibe), Labor Day is a kiss away (<–it’s the unofficial official gateway to fall!), the humidity is beginning its magical disappearing act (<–thank the baby sloths), and the idea of quick, comfort food is making its way back into my brain hole. Ahhhhhh.

And this one involves okra. Roasted okra! On a pan, in the oven, in your face. Hallelujah. 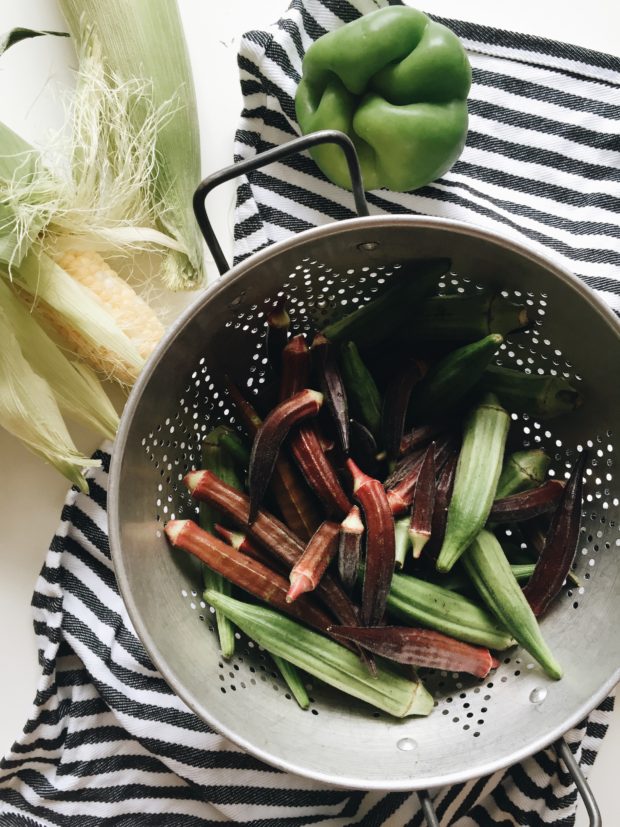 I’m also involving a bit of late-year seasonal fresh corn in this recipe, so if you happen to wait until deeper in the fall to make it, and corn isn’t falling off the market stands, you can totally go with canned or frozen corn. No one will make a face at you.

But the OKRA. Don’t be messin’ around with the okra. Get the fresh. Get that fresh feeling. 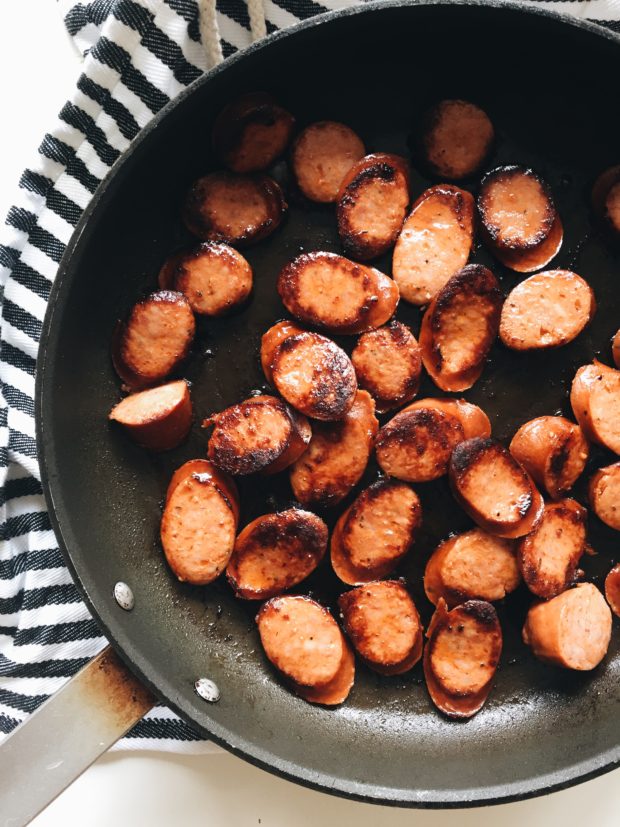 While this pasta is creamy, you don’t have to punch yourself over it because it’s just milk. Reduced fat, even! You’re totally welcome to indulge it up and go with whole, or even a bit of cream, if you’re feeling frisky. I just kept it slightly waist-friendly so I could eat more of it and not need counseling. #math 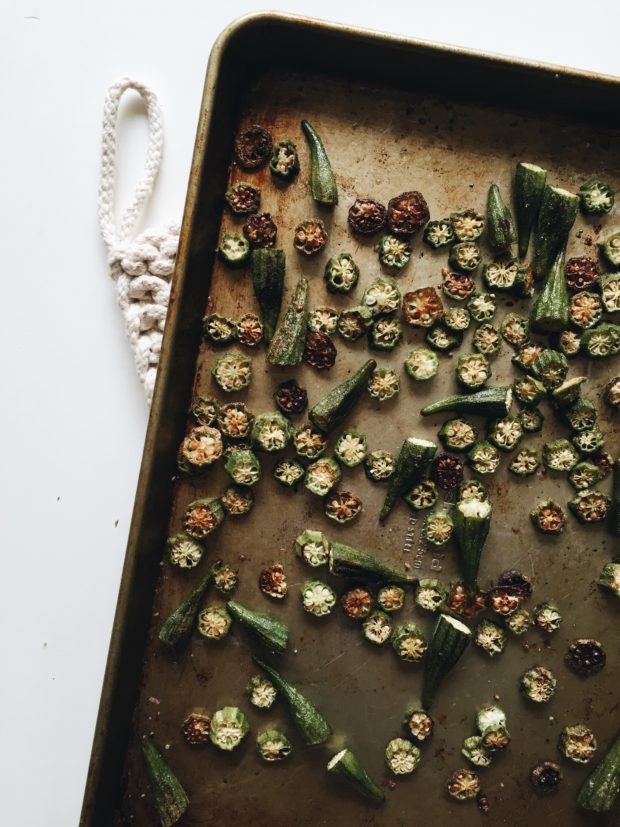 My theory behind roasting the okra was to eliminate the slime factor. Just like on “You Can’t Do That on Television”. Remember when they’d say, “I don’t know” and get dumped with buckets of green slime? Which was more like green water. But who am I to be picky.

It’s like that! Exactly like that. But instead of on your head it’s in your mouth. And you don’t have to say anything for it to happen. And it’s not on a television stage with a camera crew. It’s just you and whoever else you might be eating with. And it’s not lime green – it’s like a tiny, sticky white biofilm. And totally non-aggressive. Other than that, it’s exactly the same!

I’ll say the roasting eliminated most of the slime. The thinner slices came out crispier, resulting in a bit of added texture to the pasta. The softer pieces of okra were great, too! Just not as crispy.

This is a long paragraph about okra slime. 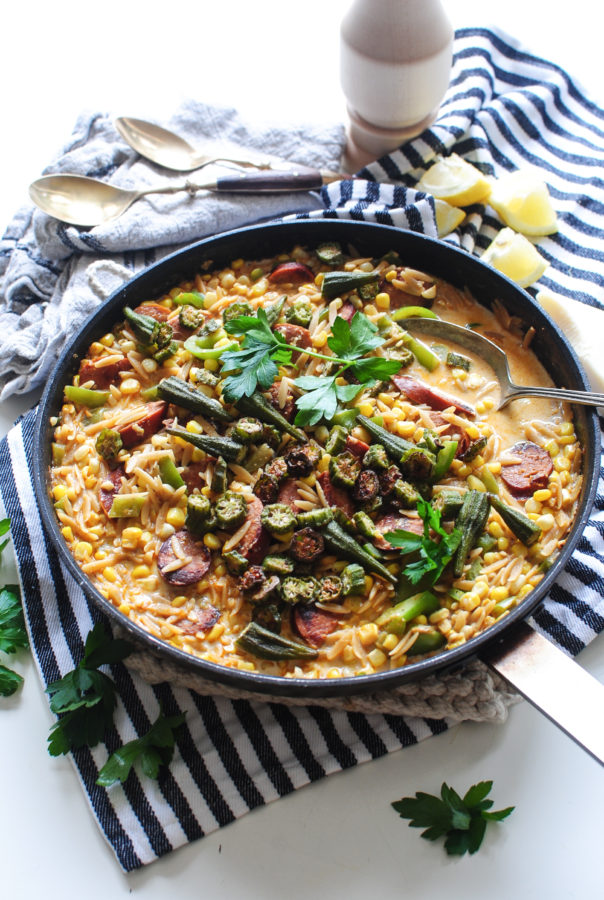 Boil some orzo, but not all the way! You’ll let it finish cooking in the seasoned cream sauce. (which was just milk, remember? don’t get stabby.)

Top with roasted okra, lemon juice and a bit of parmesan cheese. 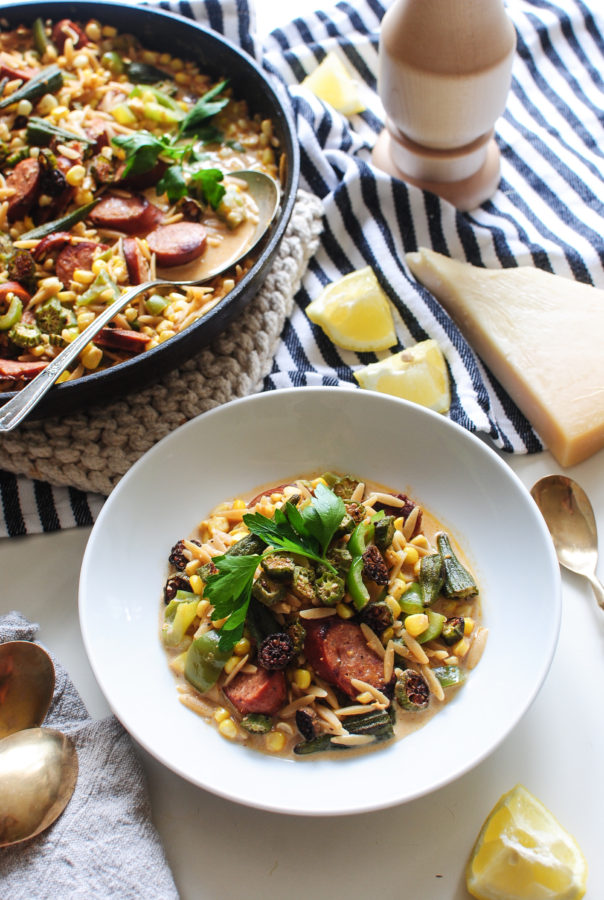 The orzo will soooooak that mess up, David Copperfield style.

And then your entire mouth will inhale it all, Tasmanian Devil style. 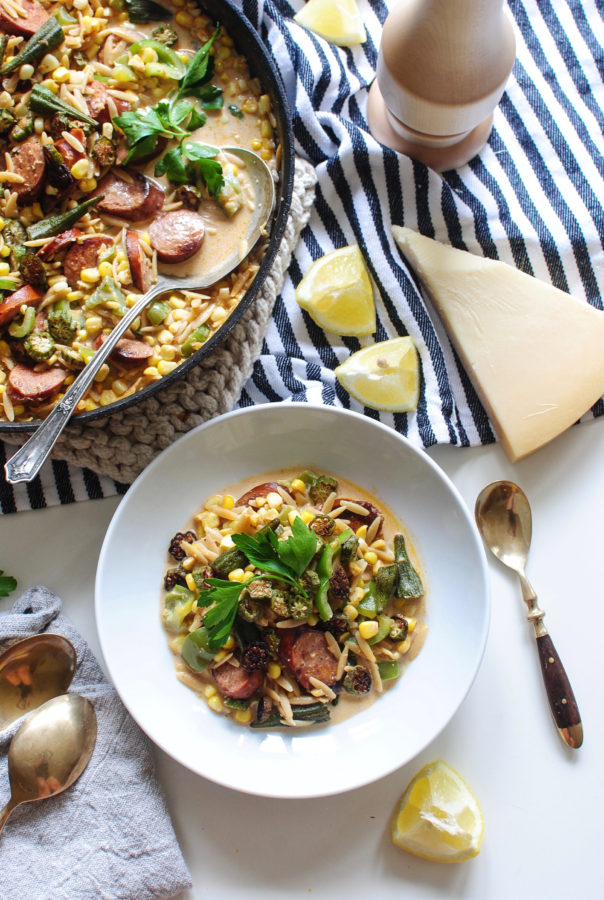 Don’t say I didn’t warn you. 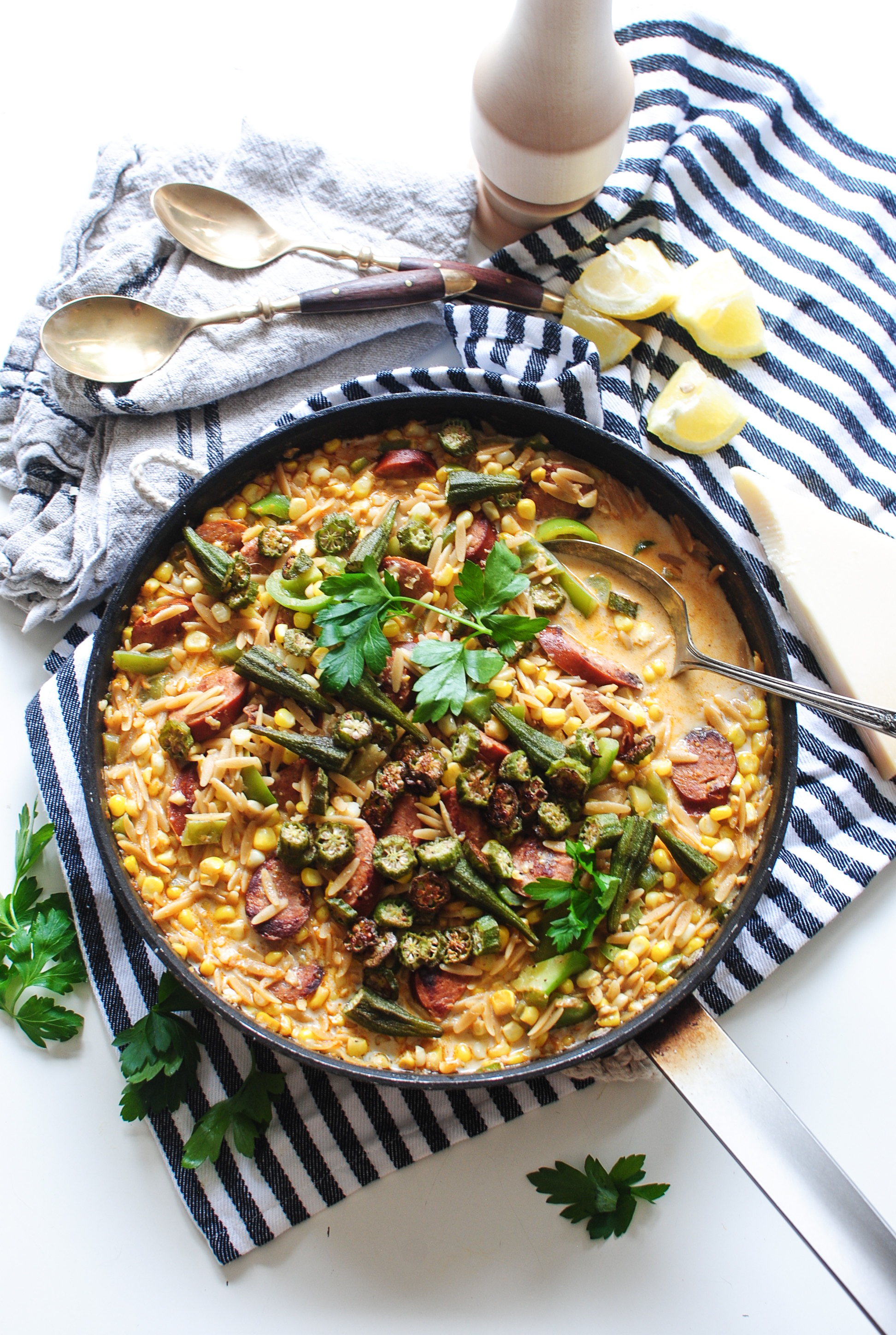 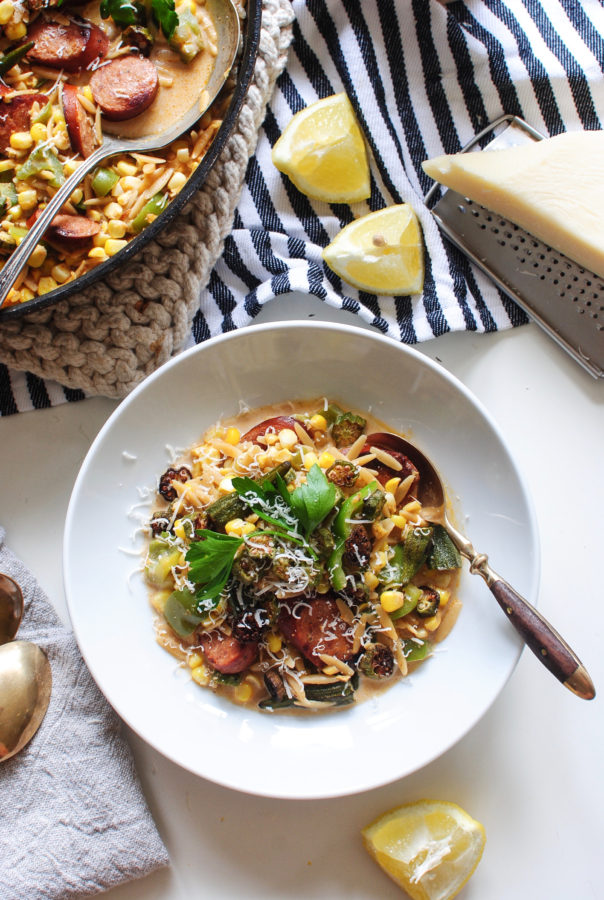 9 Responses to Creamy Cajun Pasta with Roasted Okra and Sausage