It’s a savory mouth festapalooza, in other words.

This was my very first time trying halloumi cheese, can you believe that? FIRST TIME. I dig it! It’s weird. It’s cheese that you can sear in a pan and it won’t melt. A lot like bread cheese. Which, when I was searching out the halloumi but holding up the bread cheese, the lady behind the counter said to me, “That’s nothing like halloumi. It’s very different.” – Guys, it’s not that different. MAYBE if I tried them side by side, then I could tell this “huge difference.” But they’re both salty, semi-hard cheeses that brown nicely in a pan with miniscule oozing. They’re lovely!

So I seared some and put it in a salad. We’ll call it a salad. A cheese salad. Let us rejoice.

I like to think of this as another side dish recipe actually. It’s plant protein heavy, but with a crispy crunchy texture that’s basic mouth fun.

And those spices? They’re just onion and garlic powders plus paprika. Not smoked paprika! Regular paprika. The kind your Aunt put on top of potato salad in 1993.

The chickpeas! Two cans, if you’re feeding more than two mouths. Rinse them nicely, and then roll them around between two clean kitchen towels until all the little skins have peeled off. This WILL take you about 10 minutes. So plan for it and don’t get stabby once the time comes.

De-skinned! And tossed with oil, the spices, and a pinch of salt. We’re rolling now. Ha! oh.

Aaaaand crispy. This is broiled for about 10 minutes. Maybe a hair more if needed. Just keep an eye on them and toss the pan every five or so to make sure they’re crunching up all over.

And listen, if you need to pop a few in your mouth as a snack, this is how you’ll know you’re alive.

I might need to remind you that THIS IS CHEESE. THIS IS SEARED CHEESE IN A PAN. What world are we living in?

And here we go. We’ll toss the chickpeas and seared halloumi with finely chopped red onion, snipped chives, and paper thin radishes. It is as easy as that.

In HINDSIGHT I would have cut the cheese (ha ha?) a little smaller, but it was my first halloumi rodeo so have grace, ‘mkay?

Oh, give it a toss with a good finishing oil. Your best. Extra virgin. Drizzle drizzle.

I dare you to try it! SEAR THAT CHEESE, MAN.

I spoon fed myself, and put it on homemade crusty bread. It’s really whatever gives you giddy pants.

And you can half the recipe if you just need a little. Either way, this makes an unexpected side dish with so much savory flavor and texture you’ll need to punch something. Not glass though. Don’t punch glass.

I’m officially into searing my cheese. 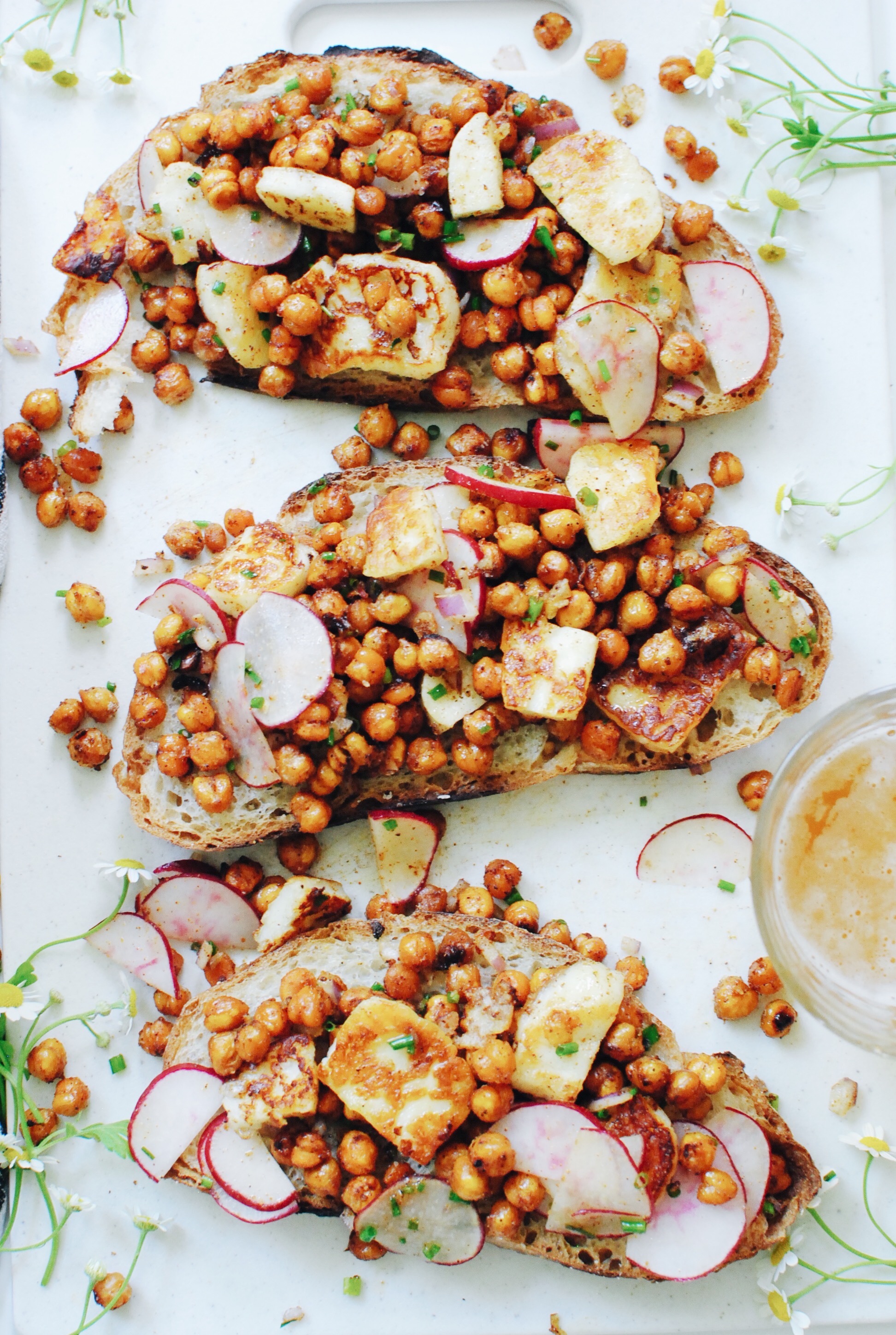 One Response to Roasted Chickpea Salad with Radishes and Halloumi