You’re like, “Hold on wait what did you just say?”

Yes, ma’am. That is a shredded pork shoulder all up in a rich but simple enchilada soup. It happened, and I need you to know about it.

Plus! Let’s count the ingredients. I’ll do it, you refill your coffee.

Overall, our goal is spectacularly shredded pork in a velvety soup laced with enchilada flavors and textures. Which you’ll see is bonkers achieved.

First up, just combine the cumin, chili, onion and garlic powders in a little bowl. Plus some salt. Don’t forget that.

ALSO, I trimmed all the huge chunks of excess fat off. I know that’s a scandalous move according to some purists. But dude, I cannot handle a wiggly bite in my soup. Nope. Nerp. Hard pass. I do realize that some fat renders out and becomes nothing but rich flavor, which I’m here for. But some chunks do not, and instead become blobby blorbs of blech. Trim that ish off.

Sear it! I went three minutes per side. Four sides in all. Nothing to complain about.

And what you’ll do is add a cup of chicken stock, and slide the pot into a 300-degree oven for . . . oh, three to three and a half hours. You’ll turn or gently flip it every hour or so, until it’s shreddable, pullable, lusciousable, insert your faceable.

Like that. ^ Go ahead and put one of those charred chunks in your mouth hole right now. No one’s looking. (except me)

Then ya add the enchi sauce. Two cans. Dump ’em in. With reckless abandon.

Then pour the remaining stock in.

Now HERE we’re at a crossroads. Scarecrow style. We can go this way, or we can go that way. Or we can go both ways! Probably not though.

It involves the hominy. I threw it on a sheetpan and broiled it for about ten minutes, wanting to see if it charred up like corn does. Well, it doesn’t. Not really. However, instead of a char, it does get crispy. Definitely some fun texture. So if you want, broil it! It not, just dump the cans of hominy right in after the stock.

You can also toast some flour tortillas if you have the time. Chips are marvelous, too.

Look at that. I just needed to show you the shredded-i-ness of the soup before I cry so hard I’m unable to type.

It’s a rich soup. It is. The pork depth and the velvety enchilada sauce, the toasted corn flavor of the hominy. It’s all there. Be sure and squeeze in some fresh lime juice to wake it up and give it some brightness. Never skimp on that. It makes all the difference in the world.

It’s a brilliant soup! So much comfort and depth of flavor. And honestly, was it that hard? Naaaaw.

The garnishes can be whatever you want. I went with crumbled queso fresco, thinly sliced onion, and plenty of torn cilantro. Everyone will go absolutely crazy over this.

And ya know, swap in shredded chicken for a slightly lighter take! This is your life, bruh. 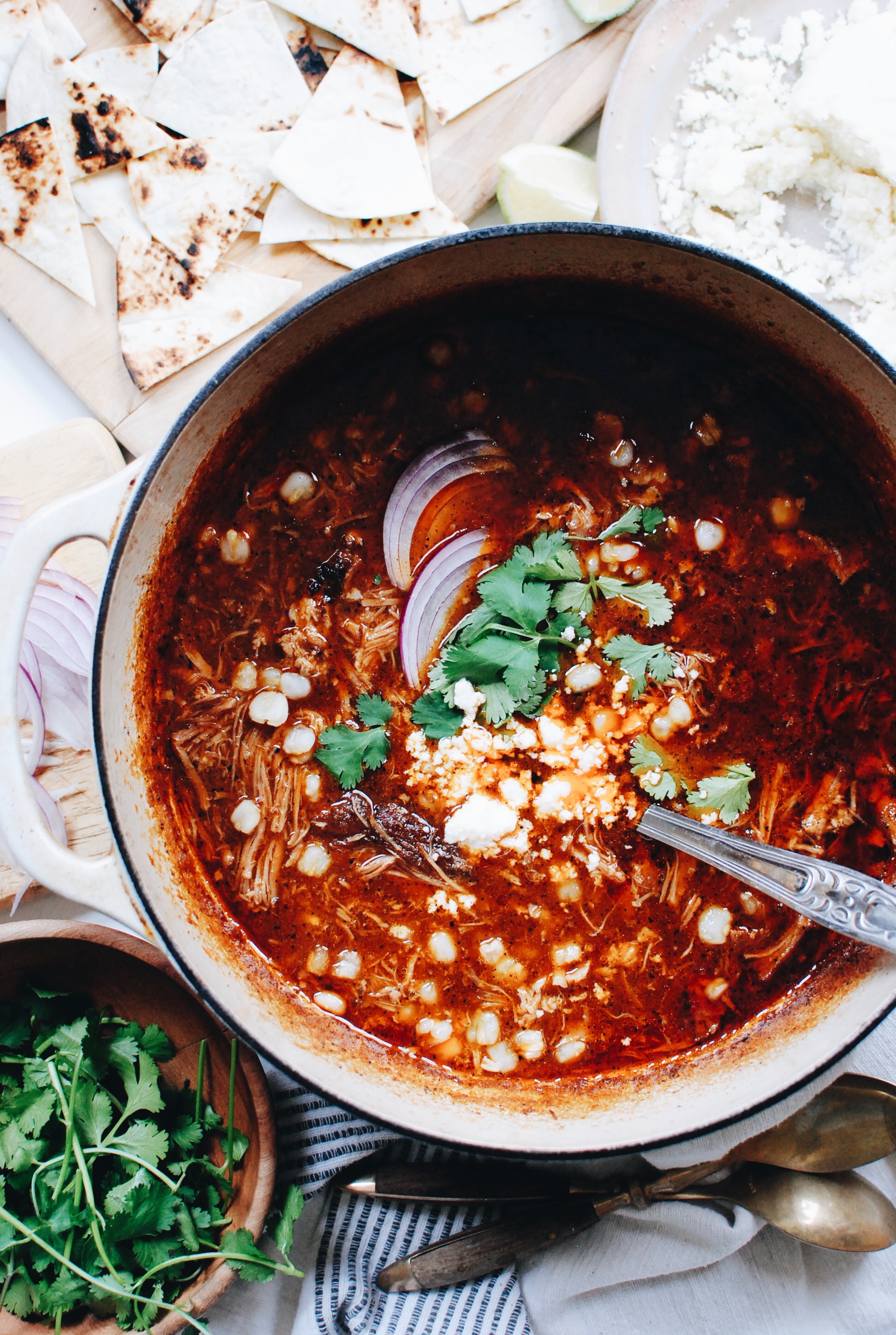 You’re going to need to suit up for this.