Oh yaaaaay, I have 300 billion 47 thousand 925 photos to show you! But I put most of them in collage form, to keep you from pouring gasoline on yourself.

I thought we could take a lil’ stroll together through the past few summer months and take a gander at some precious family memories.

Precious. Yeah, I want to hurl, too. 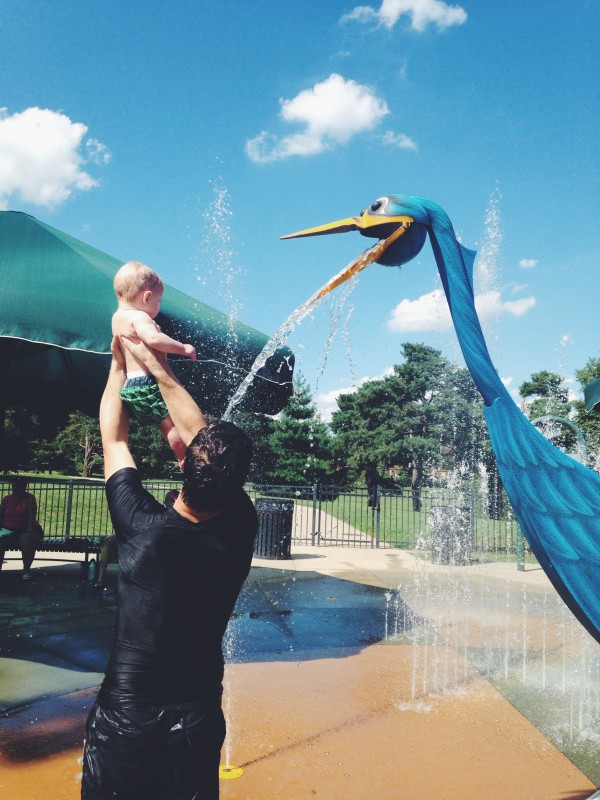 This is Aaron feeding Will to a giant, terrifying, blue metal Velociraptor. Will won’t pee his pants for the rest of his life, why do you ask? 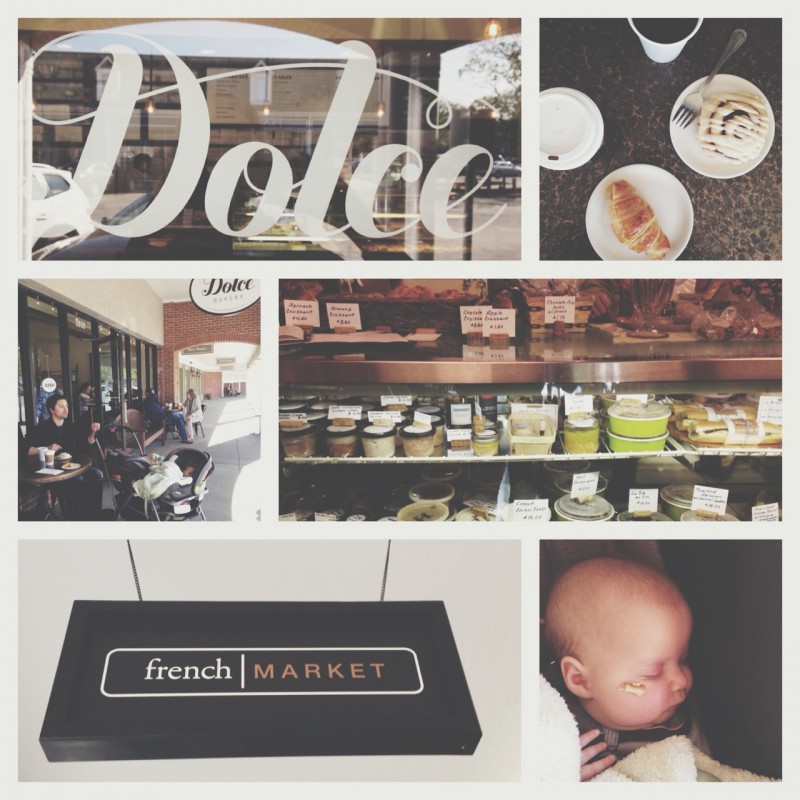 Starting back in early May, we made it a Saturday morning tradition to walk to a neighborhood coffee shop with the gremies. We have coffee and treats, feed the birds, get barfed on, people watch, plan the weekend, another round of barf, window shop, pick up lunch goodies, one more round of barf and walk home. Look how tiny Natalie is! I put a cinnamon roll bite on her face and tried to get a bird to come fetch it. Don’t report me. 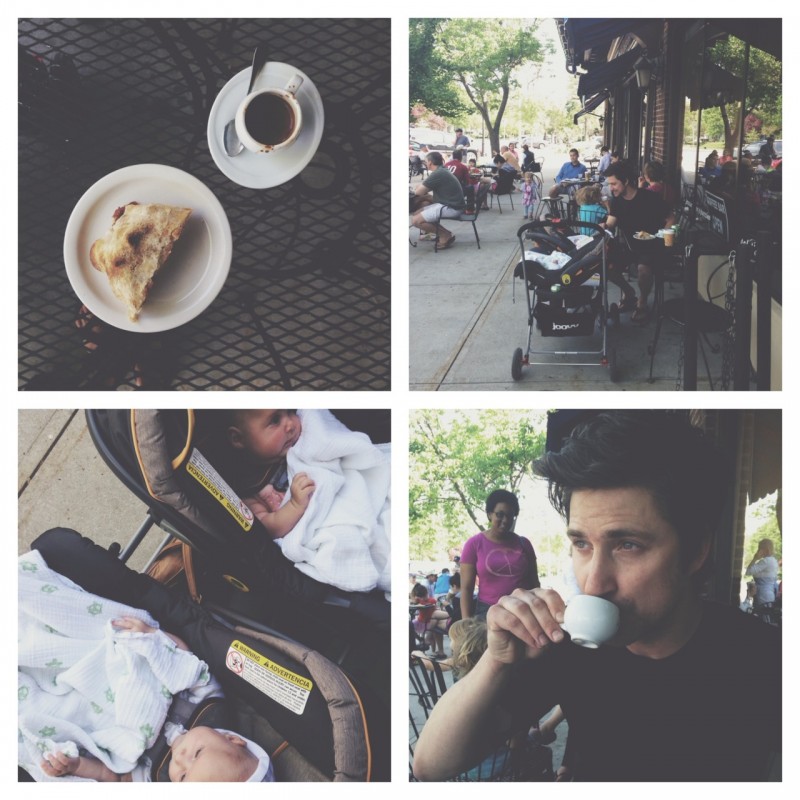 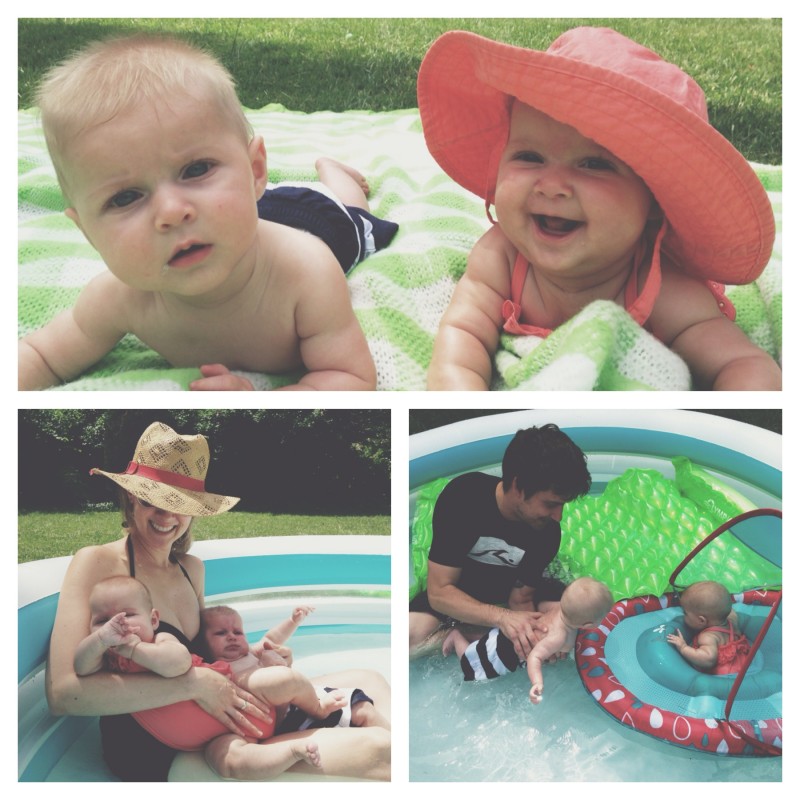 We swam! Sort of. We blew up a kiddie pool in our back yard and tried to keep the babies from drowning. I wasn’t a hysterical piece of wonk at all. 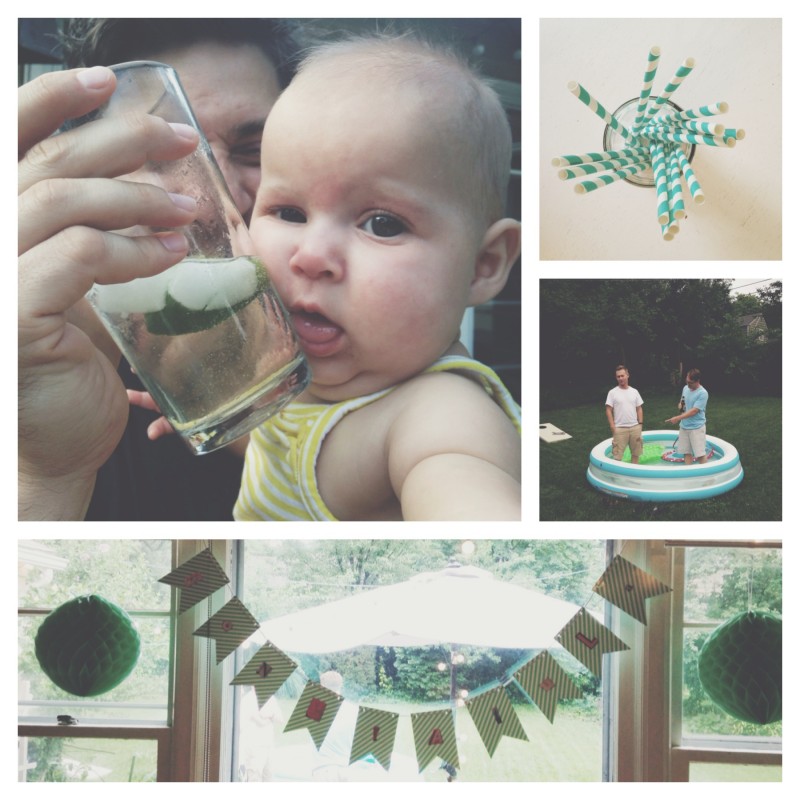 We threw a party! Kind of. I’d gone balls to the walls with backyard decor, and then it ding dang poured. So we stayed inside, ate my charcuterie plate, drank pineapple sangria and grilled beef tenderloin tails with a garden bean salad. And then later on when it stopped raining, you better believe I threw my suit on and jumped in the pool and sang Sinead’s Nothing Compares To You at the top of my lungs. It had NOTHING to do with the 13 mason jars of sangria I drank. N . . . nothing. 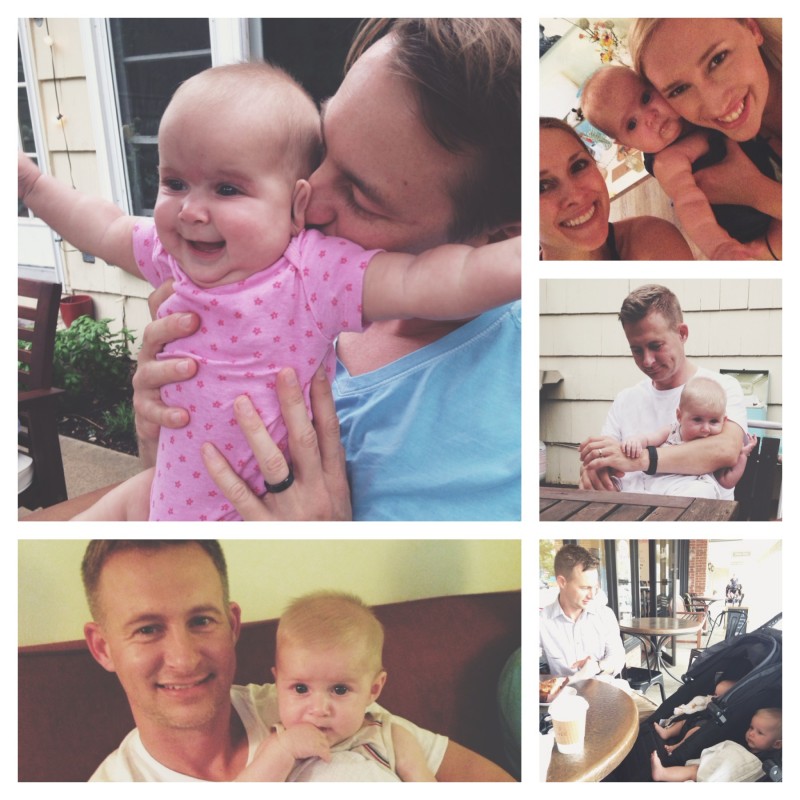 The dude with Will, that’s Aaron’s first cousin Keith. Aren’t he and Will total dopplegangers? We were afraid that when Keith walked in and met Will, they’d immediately vanish into thin air. I’m happy to report they’re both still with us. 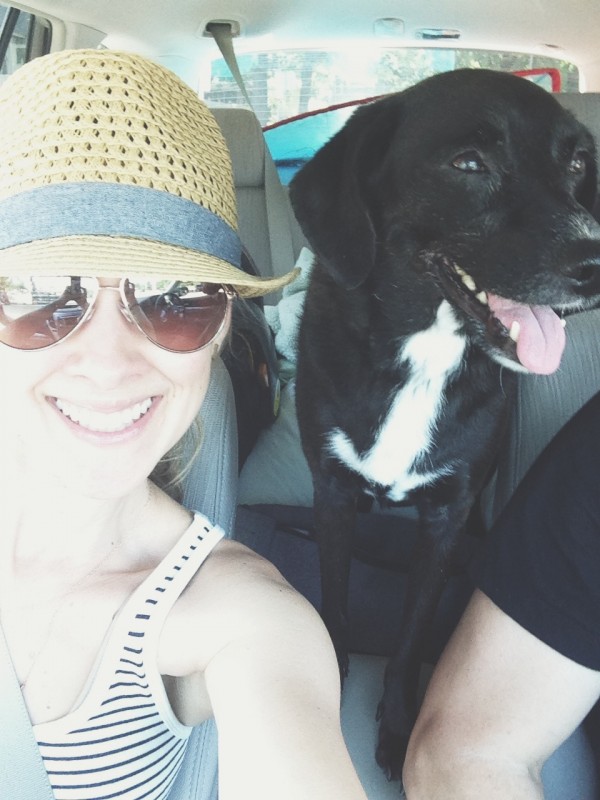 We road tripped! I normally wouldn’t post a selfie like this, but Charlie forced me to. She’s been feeling left out lately with all the baby attention. She was all, “Look, I was here FIRST. You were alllll about me. Now these two feces factories have taken over and I’m like, totally invisible. You better show your readers I’m still alive. AND cute. Mention I’m cute.” So here’s my still-alive-cute-as-hayell pup Charlie. And my pasty vampire armpit. Ugh. 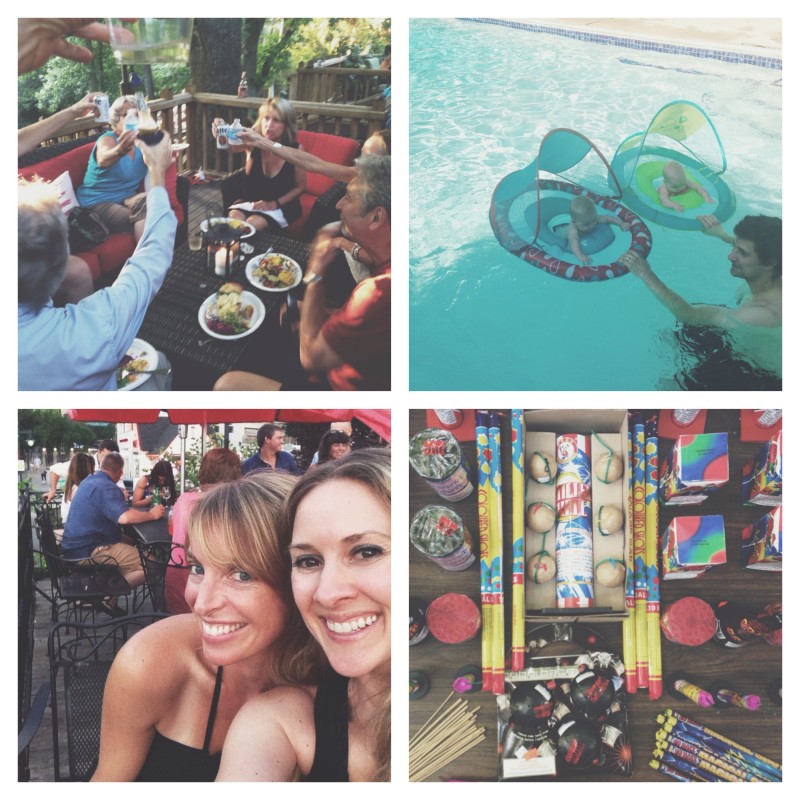 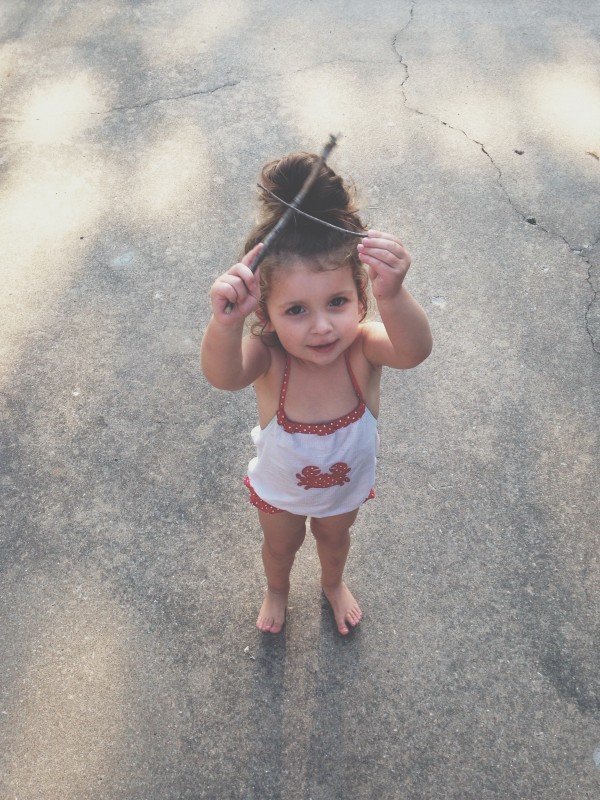 We snuggled Iris. Um, she sang the sweetest song to Natalie and it was then that I decided to have 15 more babies. Then later Will tinkle-tootied on my bare arm and I threw my decision into a trashcan and lit it on fire. 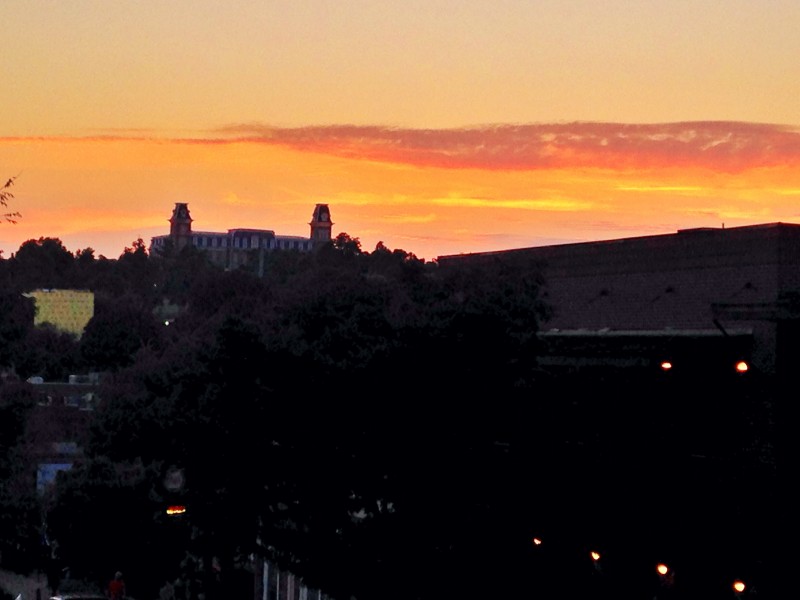 WoooooOOOOOO PIG SOO- yeah, I’m not doing that to you. 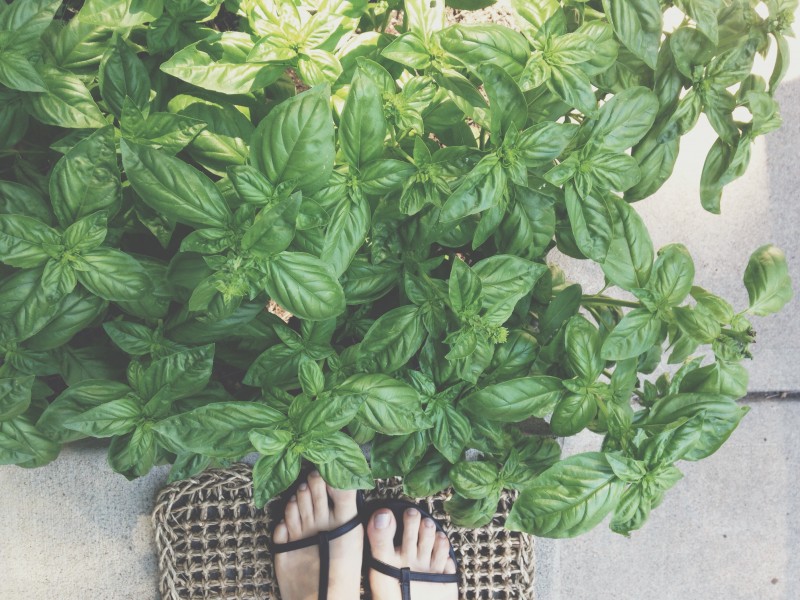 I grew a teensy tiny tinsy teeny weensy winsy woonsy whisper of basil. (it was the size of manhattan.)

Is it okay that I’m showing you my feet? Are we breaking new ground? 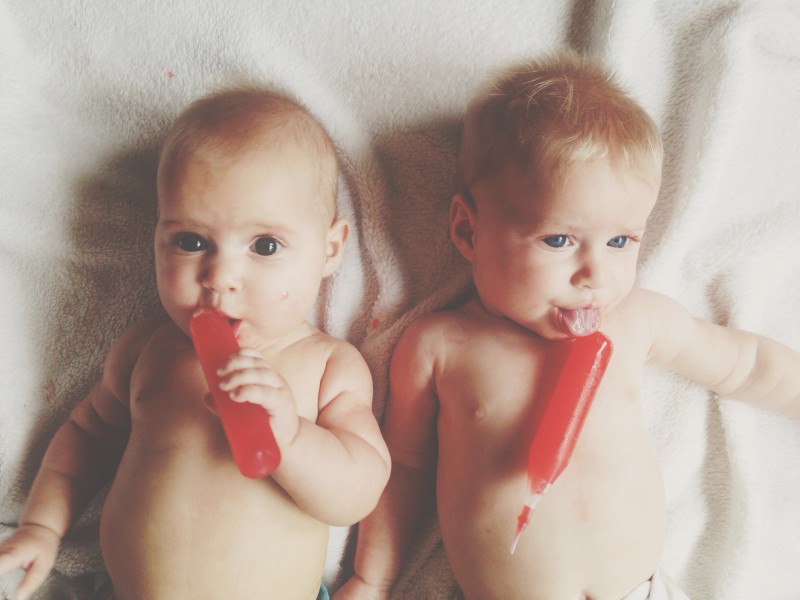 We popsicled! I licked them. 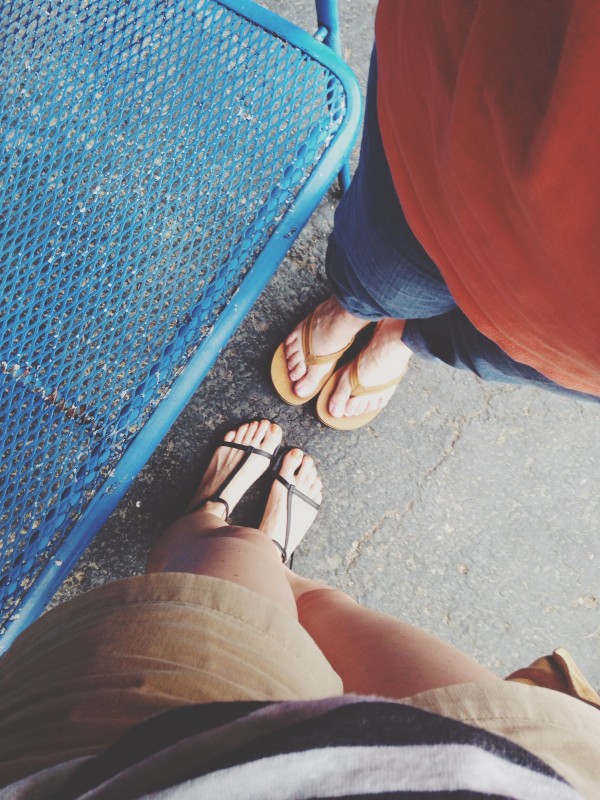 My parents visited and mom and I got our feet done! More feet. I don’t know if I’m okay with this.

I’d like to take a brief intermission to thank you for humoring me in what probably feels like a low moment in your life right now. 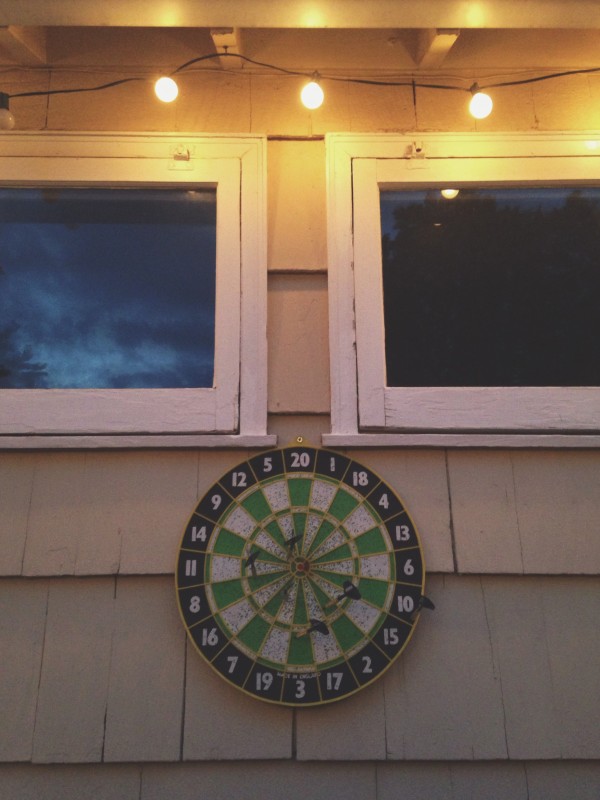 We played darts! Aaron thrifted this mid-summer and we seriously played most nights after putting the babies down. One night he even made us hot chocolate but he tripled the amount of chocolate per cup, which sounds incredible, but it was so intense I nearly slipped into cardiac arrest and died. 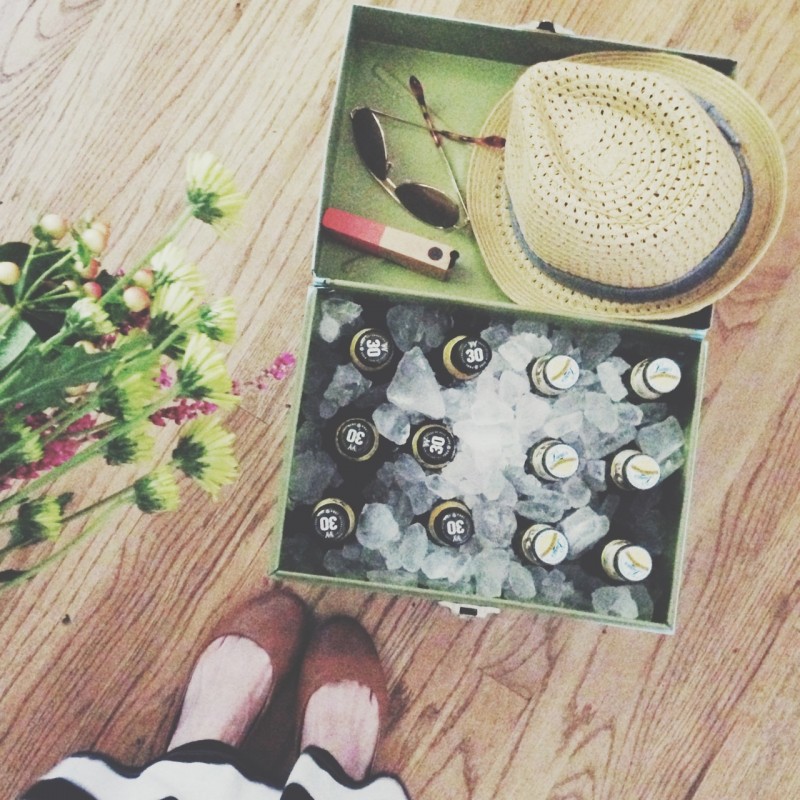 I bachelorette partied! I was in charge of road pops, so of course I nerded out by thrifting an old metal file box and painting it light blue. The outside. Not the inside. The inside is still green. I’m telling you this because apparently you’re blind. 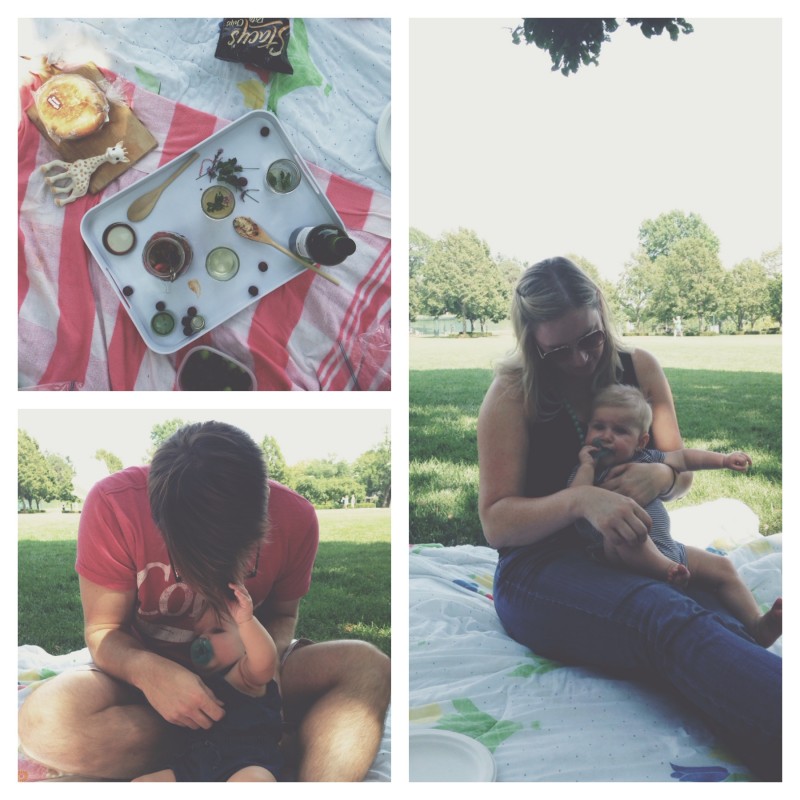 We picnicked at the Nelson lawn! Something we hadn’t done in fureyvah. We brought chicken salad sandwiches, grapes, homemade pickles and a ridiculous lemonade with agave nectar, mint and lavender. I never showed you the lemonade! Shame on my face. 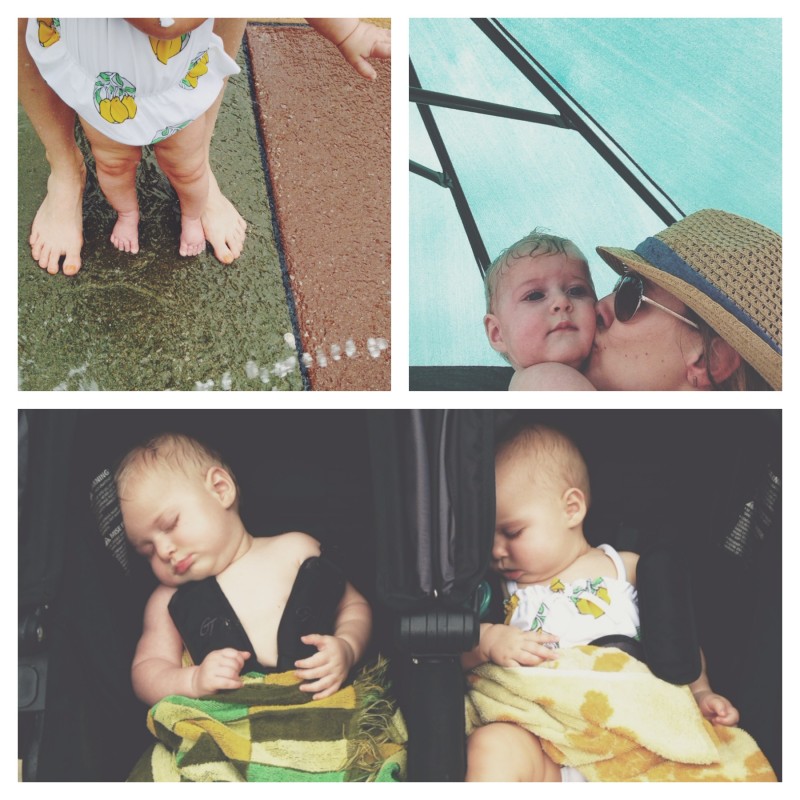 We Loose Parked it! Splash zone, duck feeding, stroller snoozes and SERIOUSLY MORE FEET? You’re about to . . . sock it to me, aren’t you?

(don’t look at that X in the corner) 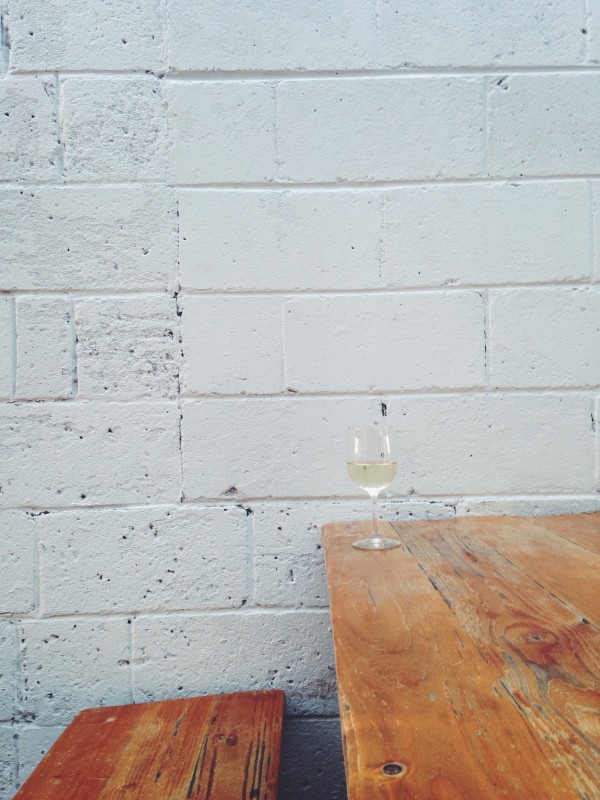 I got a dang birthday! That glass of sauv blanc was one of the most magnificent glasses I’ve ever injected. I mean snorted. I mean drank. 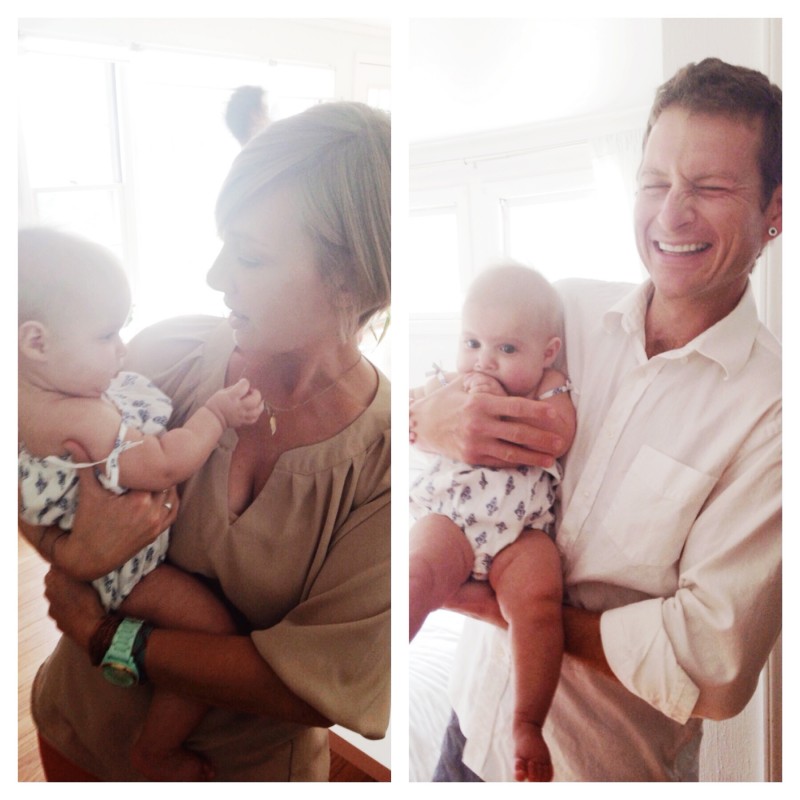 Speaking of berfday, my best friend from Boulder and her hubby flew in for our dear friends’ wedding reception, but I pretended it was all for my birthday. Because it was. They met the babies for the first time, and only got a minimal dose of barf! Progress.

Natalie is gnawing on Eric’s thumb and he’s decided it was the most thrilling event of his entire life!

(don’t quote me on that) 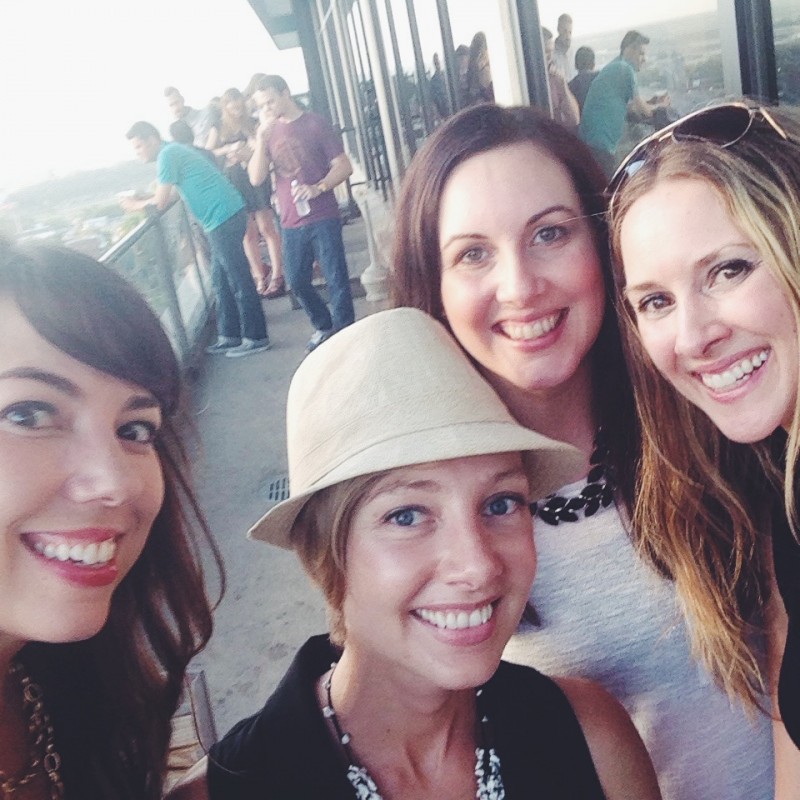 Speaking of berfday part two, a bunch of other out-of-town friends traveled to be at the wedding reception, but I pretended it was all for my birthday. Because it was. 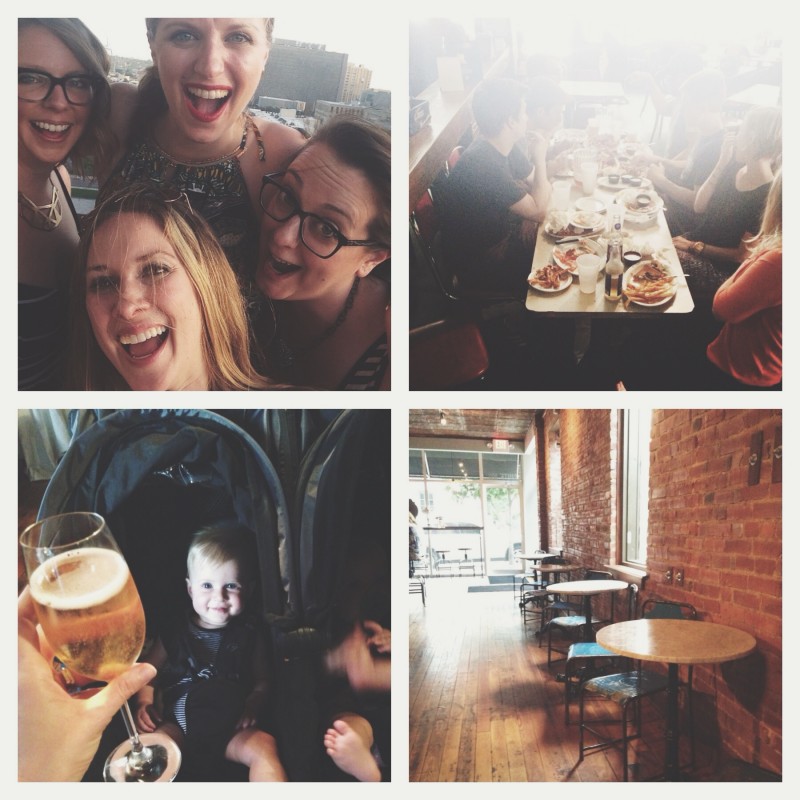 Speaking of berfday part three, we had the time of all times that weekend. Ate some chicken wangs, took the babies to a champagne bar (just look at his face), and I sang literally like eight songs at the wedding reception. Sinead (duh), Celine (ugh), Shania (hellyeah), Weezer (oops), Fleetwood Mac (uh oh), Wilson Phillips (hurts me), Aladdin’s A Whole New World with Aaron ahahahhaa! And a few more that I can’t think of. You’re welcome. 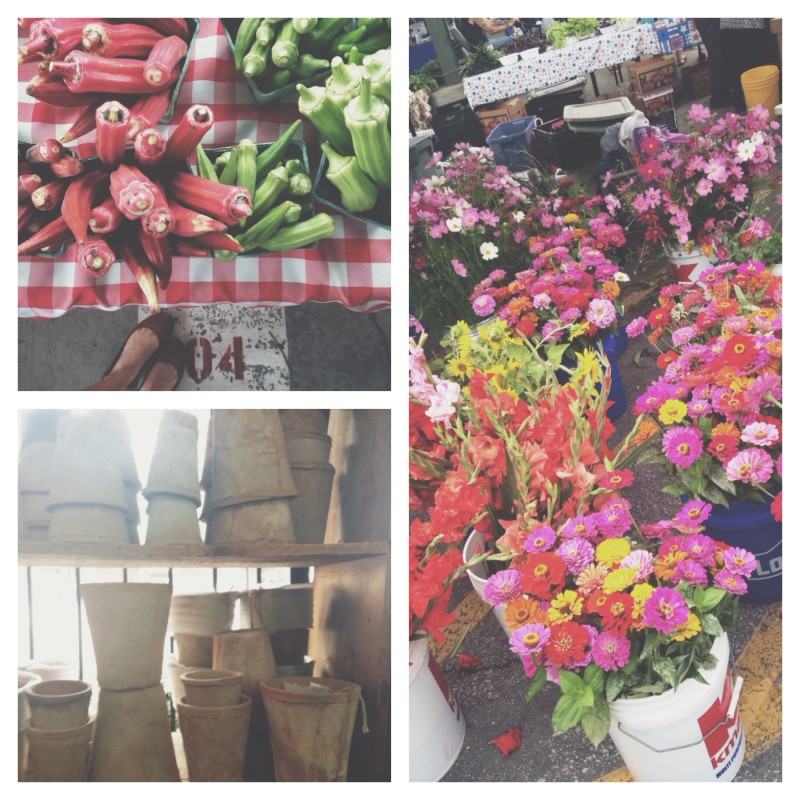 We farmer’s marketed! A LOT. And re-potted 96 billion plants in our home with these stunning rustic clay pots. I’m hoping we can just ignore my *@#$%@#$#$ feet in that photo. 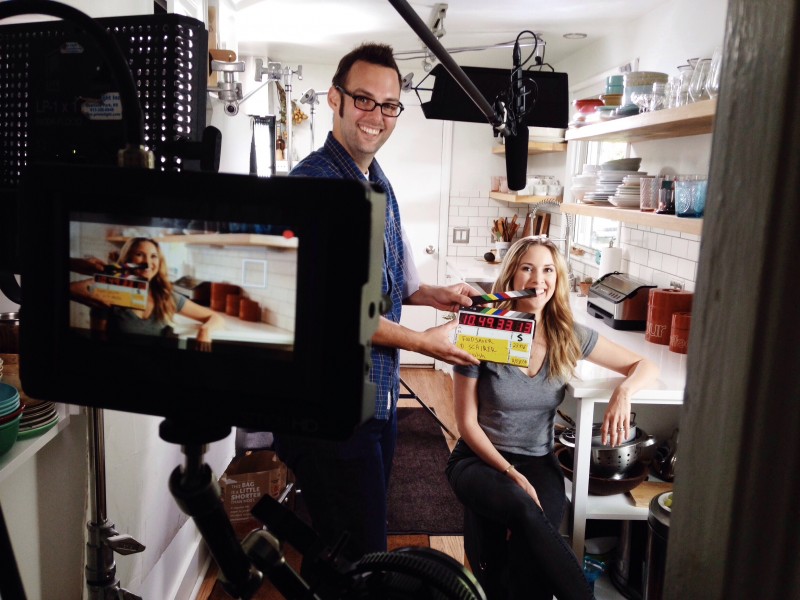 We shot a mini-documentary in my home! And I sweat. And got nervous. And made awkward jokes to 25 camera, director, producer and client humans. And got airbrushed. And wore aprons that made me look pregnant again. And ate a quesadilla outside in the heat and had to get re-brushed. And said armpit 12 times too many. And I’ll send you the link when it’s live. 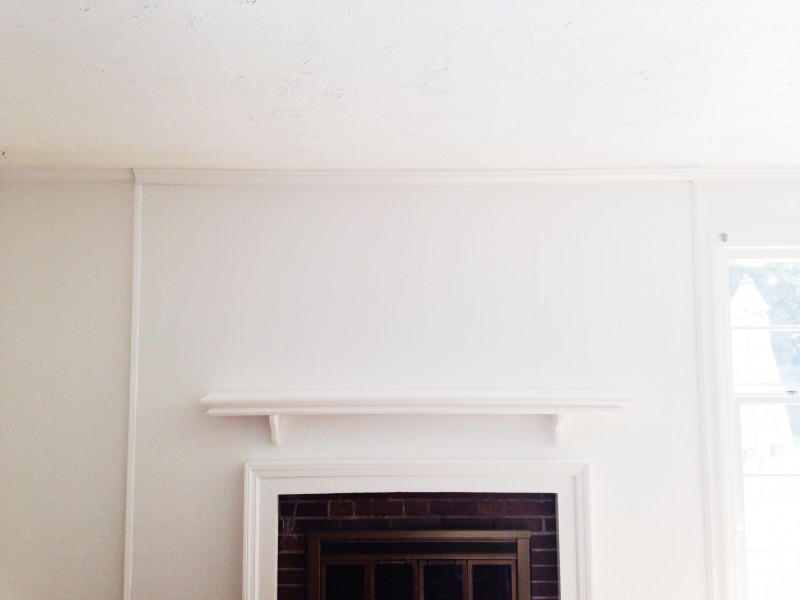 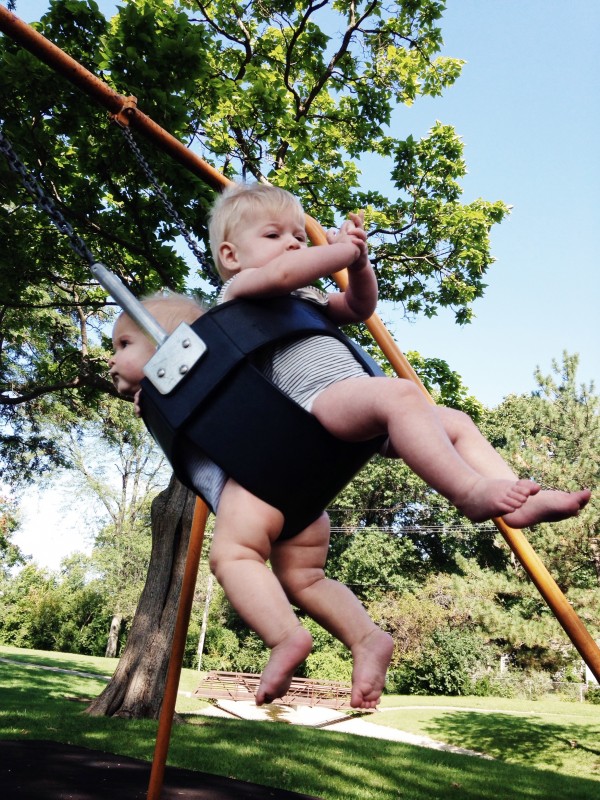 We swang! Even though it looks like Will is praying that his soul be saved if he falls out of the swing, or gets eaten by a Cooper’s Hawk Falcon Dragon that lives in the neighborhood. Or maybe he wants to be rescued slash eaten?

(can we just look at Nat’s legs real quick? who has crackers?) 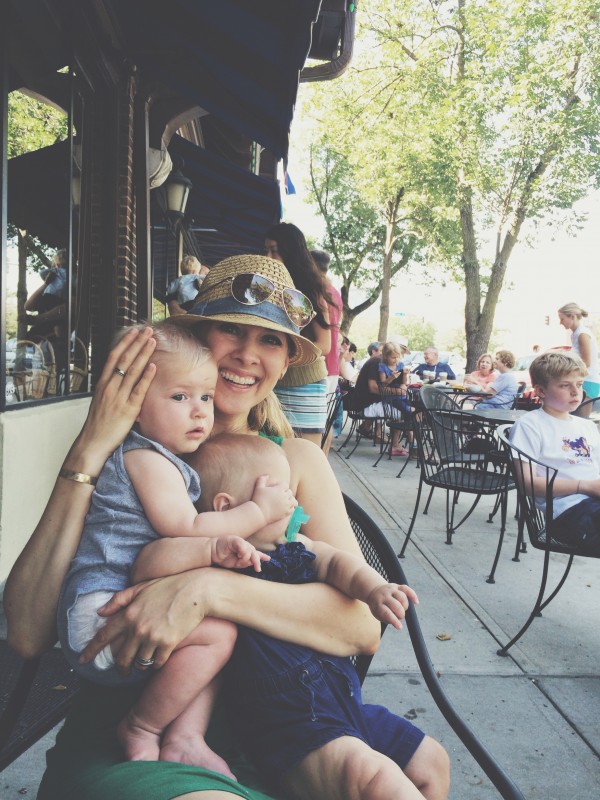 And thaaaaat, my baybuhs, was summer! As we enter fall, I’d like to hereby solemnly promise less photos of feet, unless they’re on individuals less than 12 months old.

As Aaron and I always say, “Let’s us preserve this moment in pictures.” (name that movie)

33 Responses to The Great Weidner Summer Wrap of 2014