I bet naan of you saw this coming, did ya? 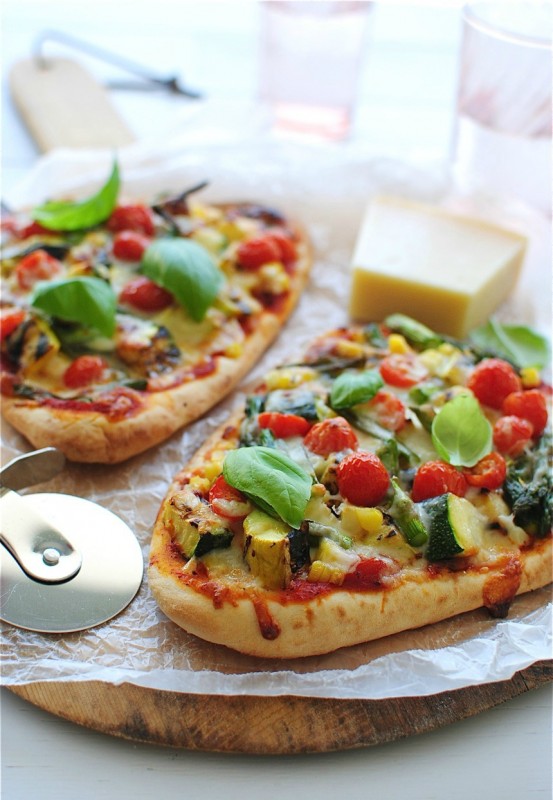 It’s been 25 seconds since I’ve posted a pizza, so obviously I’m behind schedule. And this one is veggotron loaded, so there’s no excuse in not making this. NO EXCUSE!!!

Sorry, my carrot juice tastes a little off this morning. 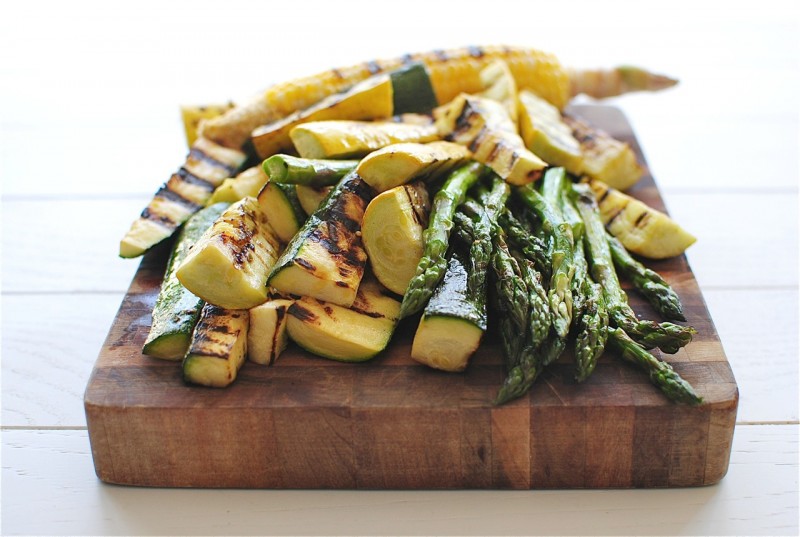 So here’s what I did. I did not grill these outside. I’m a herculean sissy about heat and grills with the possibility that a cockroach has crawled across it.

NO THEY DO, you guys. They crawl across the grates during the night, laughing and hissing at us humans, as we slumber and dream about having babies that look identical to Justin Timberlake. Suit and tie and all.

So I used my little (read: heavy as crap) indoor Staub grill pan to grill these veggeroos in batches. Sure it look a little bit longer, and sure I set the smoke alarm off 39234763 times, but WERE THERE COCKROACHES? No, no there were not, NATURE. 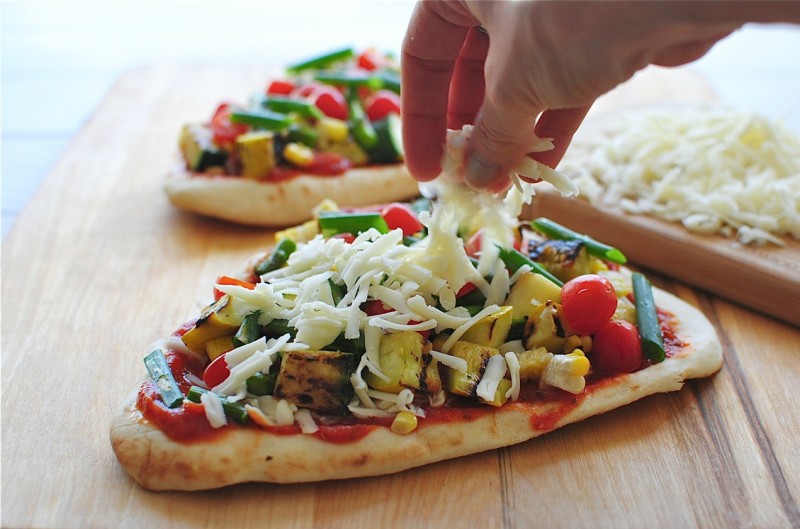 I probably shouldn’t be using the word cockroach over and over on a food blog.

By the way, is anyone watching Master Chef this summer? I almost can’t even take it. I sweat so much watching that show. Like, armpit floods. What do you think? Who’s your favorite? Who’s your le(Kr)ea(iss)st(i) favorite?

So after a nice grill of the veggizzles, you just give them a good chop. Nothing crazy, just a dice here and a dice there. Here a dice, there a dice, everywhere a dice dice.

Seriously, this carrot juice is making me feel . . . weird. There are two of you, right? 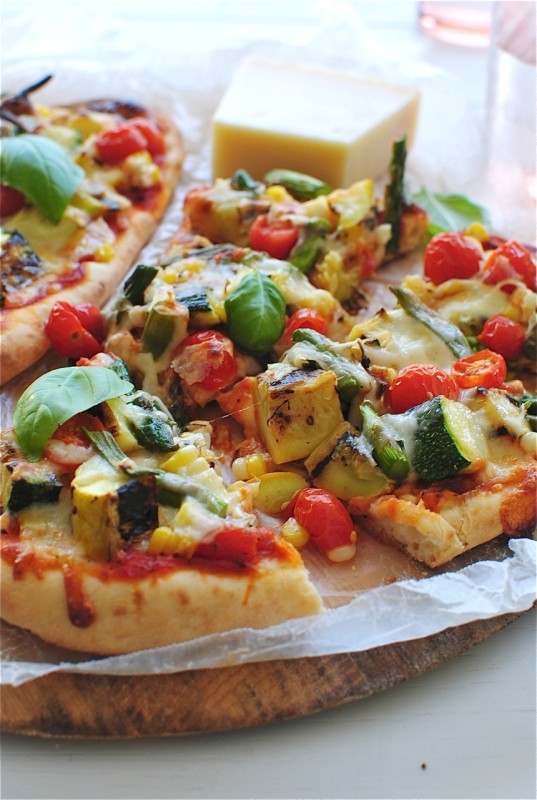 Slap ’em on some naan bread, dump a Hulk Hogan load of cheese on top, and give them a nice blast under a hot oven. ORRRR, if you’re using a scary outdoor grill, just throw them back on the grill, and close the lid until the cheese bubbles and sings songs of praise and jubilee. 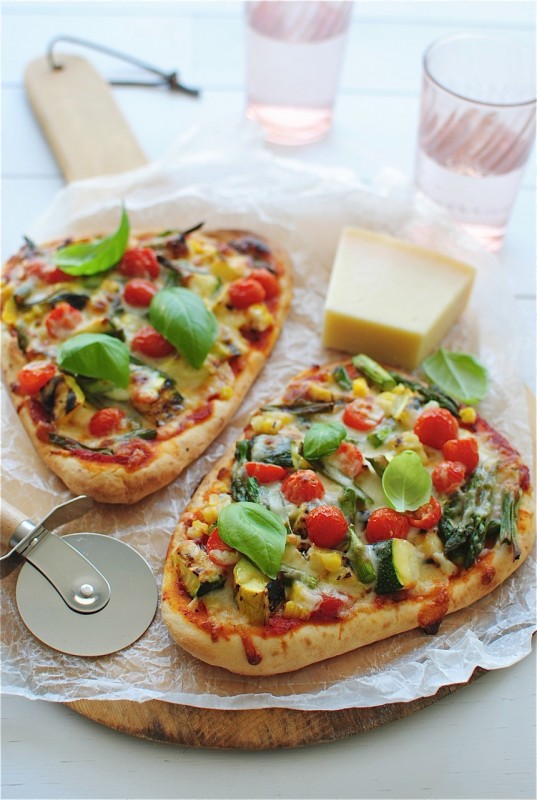 I ate both in one sitting. What.

What it took for 4 naan pizzas:

Heat an indoor or outdoor grill to medium high. Coat with cooking spray or olive oil.

Grill the veggies (sans tomatoes!) until nice and charred all over and tender on the inside. Season with salt and pepper. Give everything a nice, rough chop.

Evenly spread the pizza sauce over each naan. Top with all the grilled goodness, including the tomatoes and scallions. Then sprinkle all that awesome cheese on it.

Slide into the oven and bake for about 15 minutes, or until the cheese is browning and bubbly, and the crust is crispy and perfect. 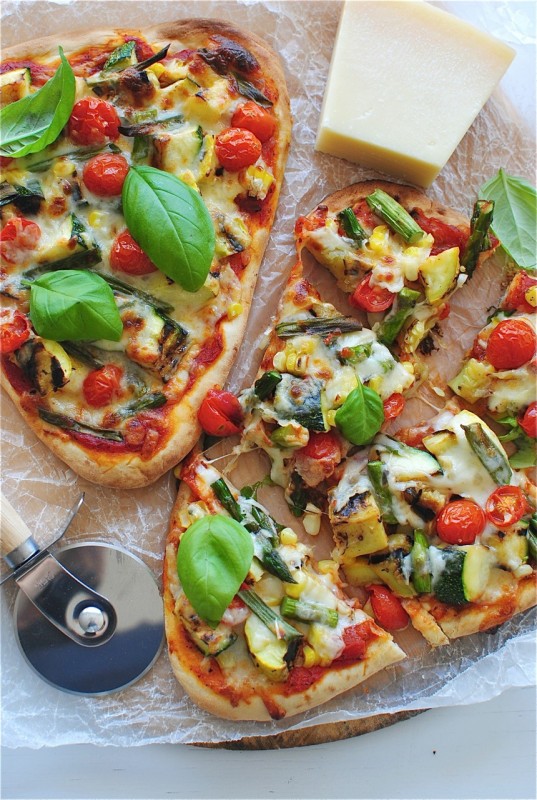 I’m looking at this pizza and I actually miss it.