So, over the weekend Aaron and I hosted a leetle dinner party at our hizzy. We had our best pals over for Vietnamese nibbles, grapefruit sorbet and loads of red wine. But not in that order. The wine was first. And all during. And definitely some more at the end. Anyway, we were finally able to do a little post-holiday catching up and Christmas gift exchanging, which is obviously the best part. Along with the wine.

But then I opened my gift. “Ooooo it’s a book!,” I chirped. And then as my eyes came into focus on the title, and then on their satisfied, venomous expressions, I realized just then the level of screwedery I was entering. The book is called Wicked Plants and it’s basically about how my aloe plant is going to turn into swords and murder me in the night. 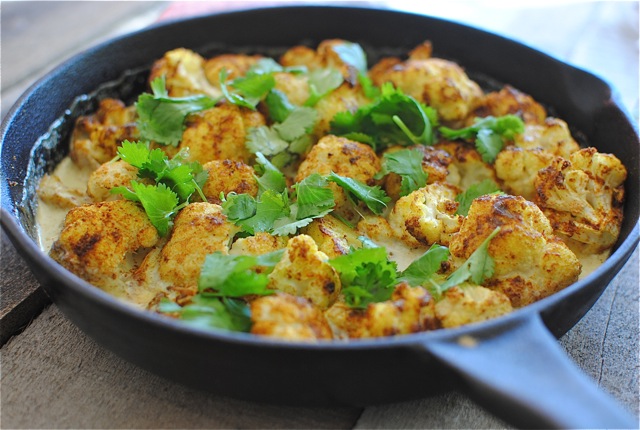 Pull up a chair. Listen to this.

1) Did you KNOW that all parts of lilies are completely poisonous to kitties? I’m talking immediate kidney failure and DEATH between 24 to 48 hours.

And that’s not all.

2) Did you KNOW that eucalyptus oil is highly flammable and can burn down like 27 houses in a flash? IT CAN.

3) Have you HEARD of a plant called Slobber Weed? Apparently if you try to eat it you’ll begin to profusely slobber buckets and buckets and then you pretty much die!

4) Did you KNOW that if you chew on Morning Glory seeds it’s like an LSD trip and then you pretty much die?!

And don’t even get me started on something called Bleeding Heart.

I’m completely fascinated and obsessed with this book, aaaaand have reached a new level of paranoia that is only a little bit annoying to Aaron.

Speaking of Aaron, the book they gave him? Wicked Bugs. In other words, no.

Maybe if I stick my whole head in this Creamy Curried Cauliflower I won’t have to be exposed to the dangerous outside elements of the world. UNLESS the cauliflower turns into little thorns and . . . well crap.