Didn’t you know that sheet pan nachos are your new life?

That up there is.

However, let’s call these SUNDAY NACHOS. Because you know how so often I’m like, “It’s so quick blah blah! It’s so weeknight yadda yadda! Comes together in a flash la dee da!” These don’t. But that’s not a bad thing. It’s not a laborious meal by any means, but it is a time commitment. In a fun way!

This is a two-parter nacho situation. Which, makes sense since you have the prepare the meat part of it, unless you buy a rotis. Which is fine. But are you seeing those hatch chiles right there? You do know it’s hatch chile season right now, right? Remember I spent 1986-1996 in New Mexico, so I definitely remember the yearly freakout that would occur when these peppers were at prime.

And they’re not crazy hot! Much like a poblano or anaheim. So don’t go shyin’ away, now.

We roast! And by roast I mean stick under the broiler and rotate every five minutes until these pups are CHARRED, yo.

Throw them in a baggie and them let steam for ten minutes. Then slap them back on a cutting board, cut them open and remove as many of the seeds as you can, along with the stem, aaaaaand….

Chop! Of course I still have some seeds in there because we can’t WIN IT ALL, GUYS.

This is what happens. You’ve cut up that pork loin (or tenderloin) into chunks and rubbed a spice mix all over (simple stuff – cumin, garlic powder, onion powder, chili powder and salt) and seared the pork all over in a pot. Now add the chopped roasted hatch chiles, some chicken stock, and simmer for two hours on medium low. I’ll be more specific in the actual instructions because there’s stock adding and heat lowering that happens. You’ll see pigeons. Ain’t no thang.

You’re probably like, “Isn’t a pork loin dry, though?” Nawww, you’ve added almost two cups of stock over the last two hours. It’s PERFECT. You’ll absolutely freak over this flavor, I’m telling you. The chiles have cooked down into the pork and infused the whole ding dang pot with roasted essence and you will SOB.

And IMHO, it shreds prettier than a shoulder does. I’ll probably be cast from food blogdom for that one, but I stand by it.

PART TWO: the nacho building! (building being a verb, not a noun. “What is this, a center for ANTS?” – name that movie.)

And see, all this stuff you can prep while the pork is cooking! Look at us budgeting our tiiiiime.

The toppings are all pretty standard, but there is one standout ingredient that will seriously change the course of your life. You already know my obsession with Roth’s original Havarti cheese. It’s out of control, but I’ll never quit it. It’s SO CREAMY and mellow with all these magical subtle nutty undertones, that blanketing a nacho situation (where you’d normally use say, a cheddar) is MIND BLOWING.

We’ll get there, hold up.

It’s all so good – chips scattered on a baking sheet, the entire pot of shredded pork because you’re no animal, a handful of black beans, and so much grated Havarti you can barely see straight.

Let me say, I started with one six ounce block, and needed more. So I grabbed another six ouncer and grated half of it. This will be up to you. If you want it light on cheese (what is wrong with you?) stop at one block. If you want more (‘atta girl) add a bit more! Fly, birdie.

Hi, this is BEFORE the fixins. Look at that beautiful glossy melted Havarti!

You’ll be a puddle of glorious giddy goo on the floor right now, because what happens with that Havarti and pork is other worldly. Creamy meltage meets savory shreds of bliss. It’s just so wildly different than a cheddar. You have to try this or else I might cry forever.

Aaaaand bedazzled! Anything and everything. Make it dreamy and load it up with all the things.

I had someone in Instagram Stories dm me all, “RADISHES on my nachos? You’re crazy and I love it.” UM, DUH. Get those sliced peppery bites on there!

Don’t forget to squeeze a bit of lime over the whole sheet before serving. Wakes it up, ya know. Brings it all together.

In LONG: roast you some hatch chiles because they’re in season and have such incredible flavor and you can get them anymore. Simmer them with a pork loin because I said so. Use Roth’s Havarti cheese to blanket your sheet pan nachos because the cream factor will transport you to another planet.

But maybe invite me over. 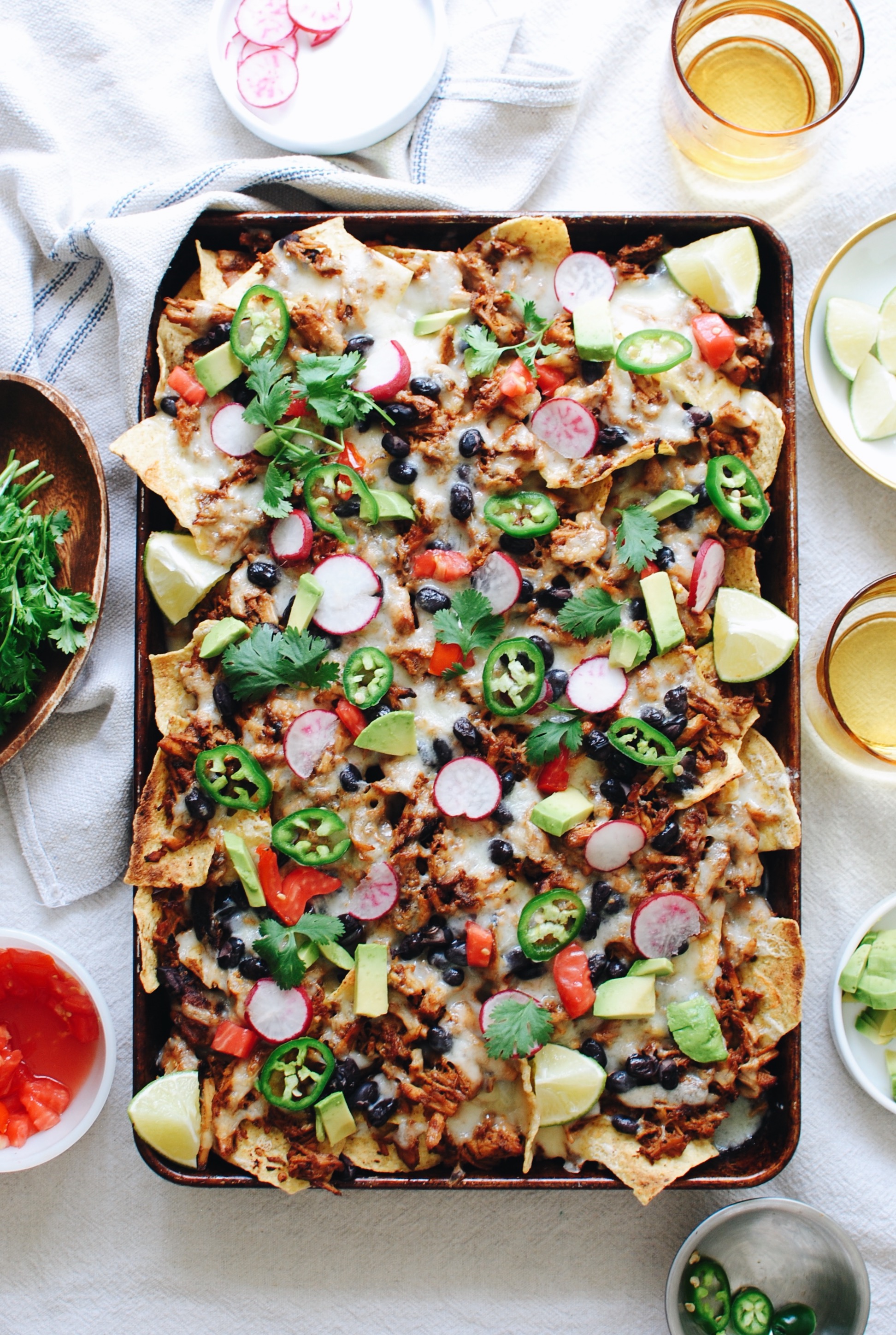 (This post is definitely in partnership with my lover Roth Cheese, but all ramblings and cheese inhalings are totally my own. We coo?)