Because a) they’re partly slow cooker, b) but simple and wildly flavorful, and c) you put them on a platter and broil cheese on top and become the queen of life.

Alright, so look. We got a pork shoulder. Pork butt. Pork shoulder butt. Whatever. We’ve got tortillas (which you’ll char before stuffing! this is a loop hole in life in which you must obey.)

We’ve got frozen corn from a bag. Don’t look at me like that. I’ve GOT WAYS.

What happens first is an optional step, but I SERIOUSLY think it makes an enormo difference. You’ll generously salt and pepper the pork, and sear it like a mother in a hot oiled pan.

Now listen, at this point I DID NOT TRIM the fat. (“You were going to drink the fat!” <–name that show.) I wanted the pork to simmer in its own fat alllll dang day before trimming it post-cookage. And what a freaking difference that made in the flavor. I’ll forever wait to trim.

After it swims in a slow cooker with salsa verde for hours and hours, I tonged it out and slapped it on a cutting board. THEN I got all Dexter on it and snipped away the excess blubber here and there. Toss that in the trash, then give the pork a light pull with two forks. You don’t want it overly shredded to the point of it looking like a Pretty Cut ‘N Grow from the ’80s. Just pulled. A little tug. A gentle nudge.

Now for the corn! At some point during the day, place the frozen corn on a baking sheet with a little oil drizzle, a pinch of salt and pepper, and BROIL those pups until they’re charred and popping around and sweet and a little shriveled and you want to pet them and call them Frank.

Before you start stuffing burritos all willy nilly, there is one important step that will take these flour tortillas TO ELEVEN. And that is, to char them over an open flame. Just turn on your stove-top gas, and place the tortilla on the burner grates. Flip them after a few seconds. They’ll bubble up and get little char marks here and there. It happens fast, so don’t start writing next year’s Christmas cards!

This small step BOOMS the tortilla flavor to this magical toasted land of glee. Trust me. Do it.

Now just arrange the burritos side by side on a platter, individual plates, even a casserole dish will work. Sprinkle the cheese on top and stick it back under the broiler for like, a minute. You just wanted browned and bubbly cheese.

Then violently throw some chopped tomatoes on top, torn cilantro sprigs, some leftover corn if you have any, and some cubed creamy avocado.

And lime wedges! Give it all a squirt.

You may now face plant this forever. 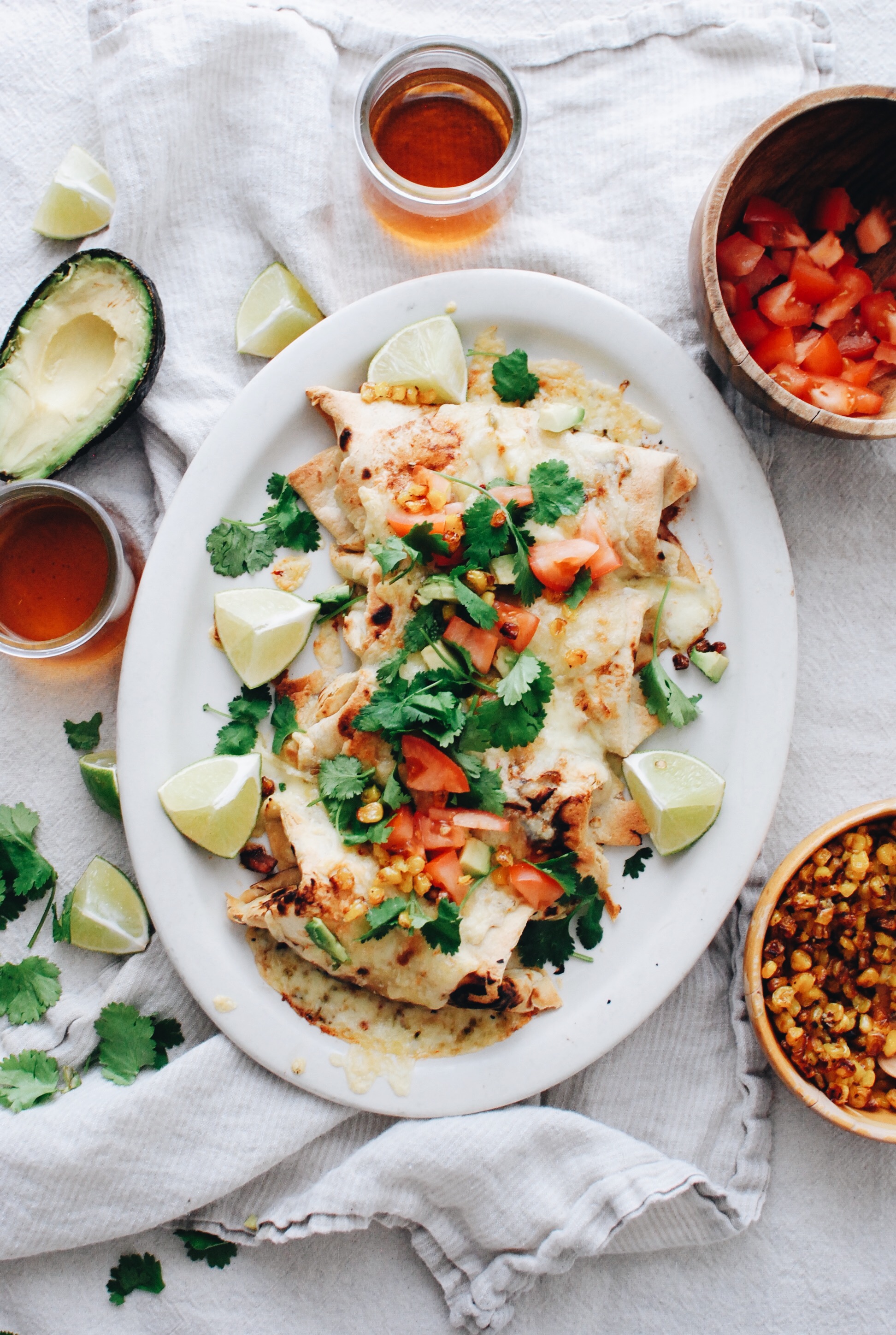