What happened was, one late afternoon last fall, Will was “STARVING, MOOOOOOM.” So I made him a quick bagel pizza (nothing new, I know), with pizza sauce and lunch meat (not reinventing the bagel wheel here), a few greens tucked in (sneaky like that), a piece of CHEDDAR cheese (he only likes yellow cheese. help me.) with leftover bacon (yes there’s a thing) and a sprinkle of cheese rain on top (parm is the only white cheese he likes. help me.)

Thus, these bagel pizza snacks were born! Er, thrown together and toasted. Whatever.

Obviously I had to have one, but with jalapenos added and holy faces. That bacon, all reactivated under the heat? Dudes.

This isn’t a recipe. I know.

What it IS, however, is my attempt to give you muthus another after-school snack idea for when your spawn goes foamy and feral in the afternoon hours. Because that happens.

This photo is more about me showing you that insano bacon juice! Grease. I meant grease. Fat. Bubbles.

Let me ask you something.

When you make bacon at home, do you cook the whole package at once, or do you just fry the amount you want to fry at that time? I ask because Aaron will fry THE ENTIRE PACKAGE at once, and then store all the leftover bacon in a zip bag. And then get out the cooked bacon he wants when he wants it, and reactivate it under a toaster. I’ve never heard of such a thing!

But it does work and of course that kills me.

ALSO, another thing to note in this incredibly fancy recipe. I normally put these in a toaster oven, so that the bagel bottoms get all crunchy and toasted. But for this post, I put them in a regular oven, on a baking sheet, which meant that the bagel bottoms weren’t as crunchy and toasted as in previous bagel pizza snack makings. But that sadness is nothing a little Marvelous Mrs. Maisel can’t fix!

And listen to this crazy science. That cheese will melt down OVER the spinach and become a purse FOR the spinach. The spinach melts INTO the cheese and gets locked INSIDE the cheese. So if you pull up the cheese from the pizza sauce, the spinach will be INSIDE IT. Isn’t that fascinating?!

You can ignore me.

Guys, these are fab. The deli turkey adds a little sammy feel (<–sorry), and the jalapenos add a kick in a face that’s simply necessary.

And the bacon? Well, duh.

New winter snack! Or dinner. Or lunch. Or game day! Or put a fried runny egg on top and get in it immediately right this instant right now. 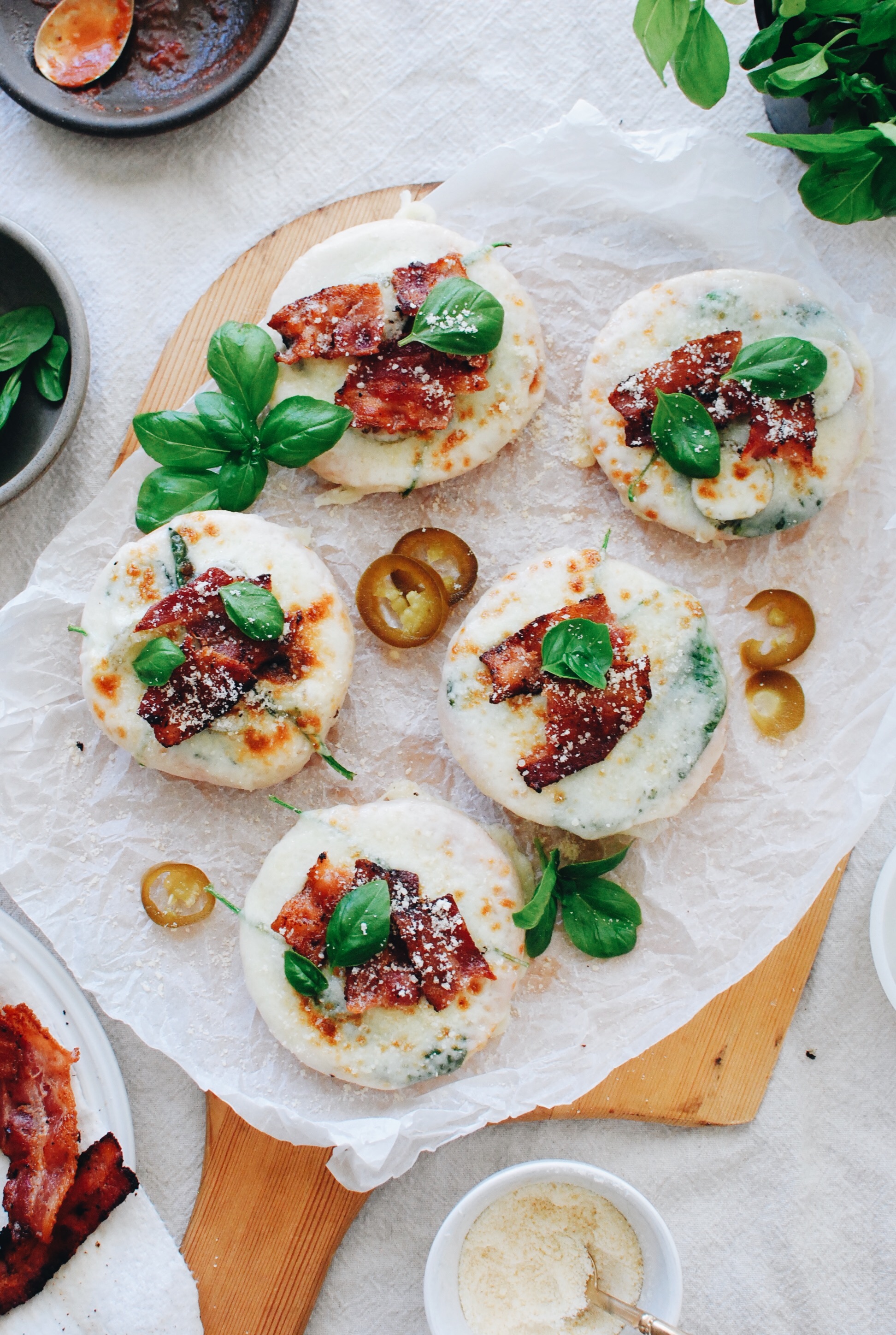