EASIEST. POTATO SIDE. EVER. 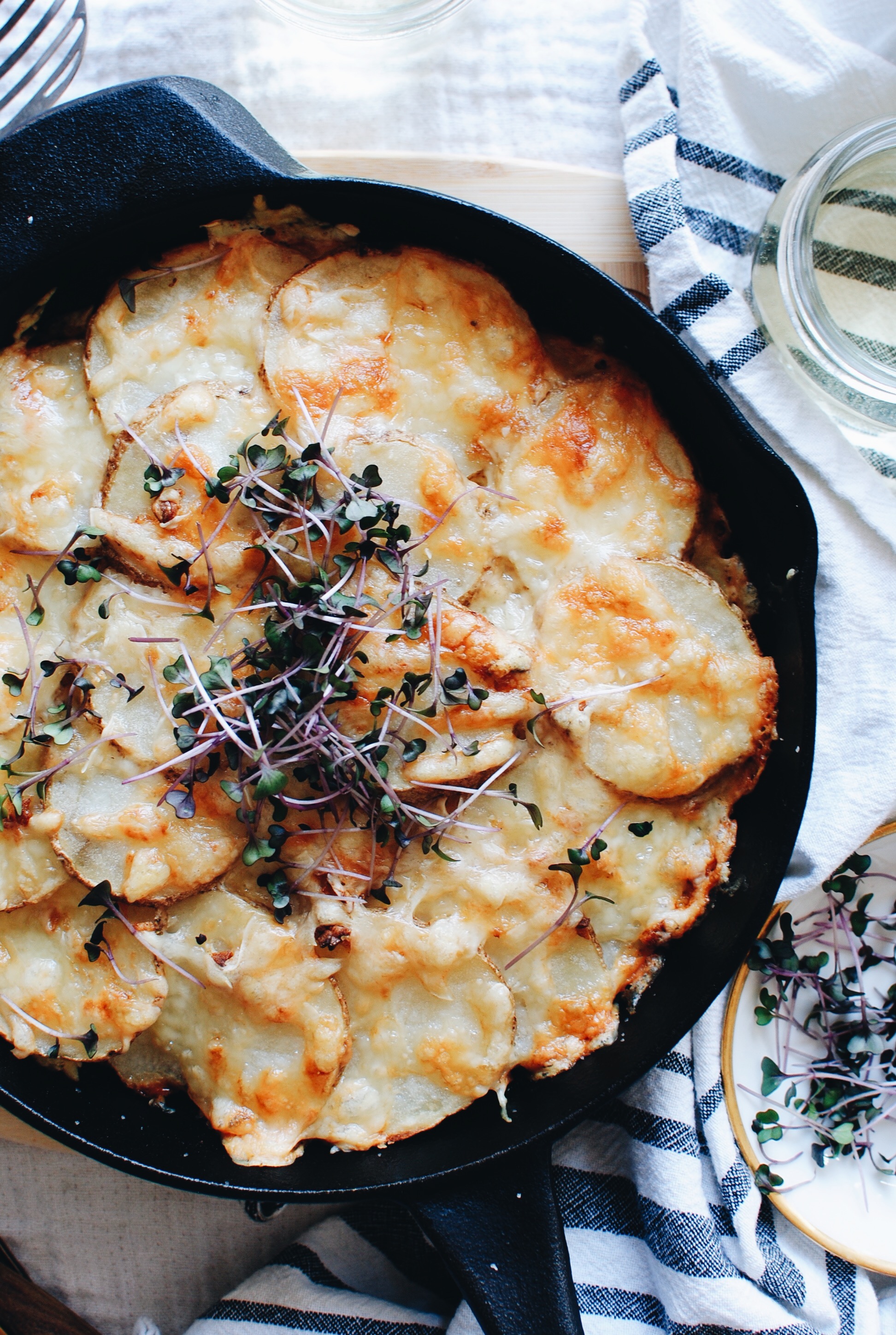 But first, a little back story. 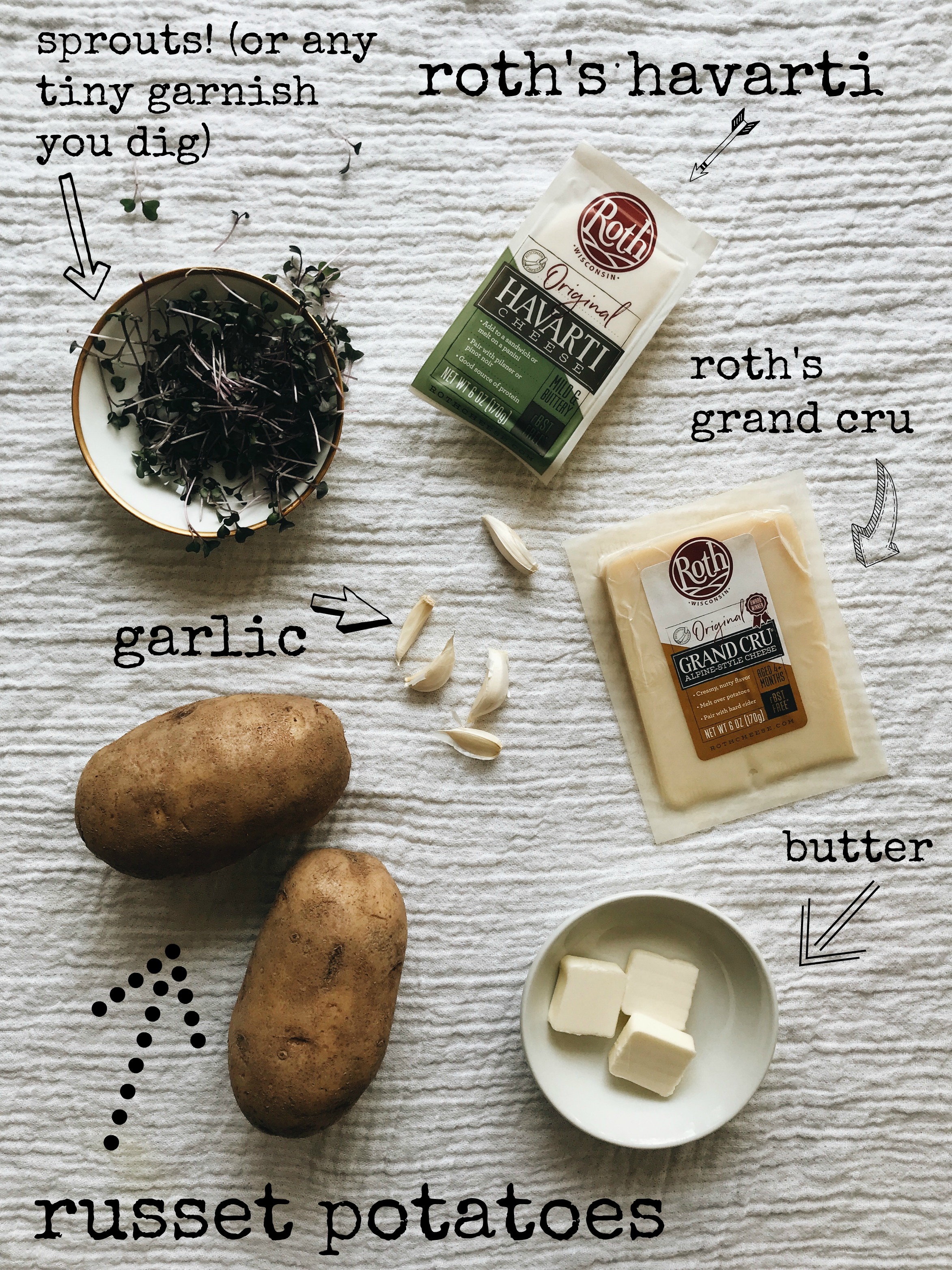 Over Easter weekend, my sister-in-law Carolyn was scribbling out the family Easter dinner menu on a piece of torn notebook paper, hunched over the kitchen counter with a just-opened beer next to her. She went over the basics, “We’ll have ham, blanched asparagus, dinner rolls, salad (You’re in charge, Bev!), and potatoes.”

But her potatoes. Her potatoes. They were as simple and classic and fabulous as simple and classic and fabulous gets. An old go-to recipe from her grandmother’s repertoire. She peeled each one (a step I’ve always skipped because hi, lazy bones here), sliced them thinly (a mandolin is all you need in this world), and layered in a cast iron skillet. With butter and salt. That is IT.

And the result was perfectly cooked potatoes with crispy edges and golden brown bottoms. Which came out wrong. 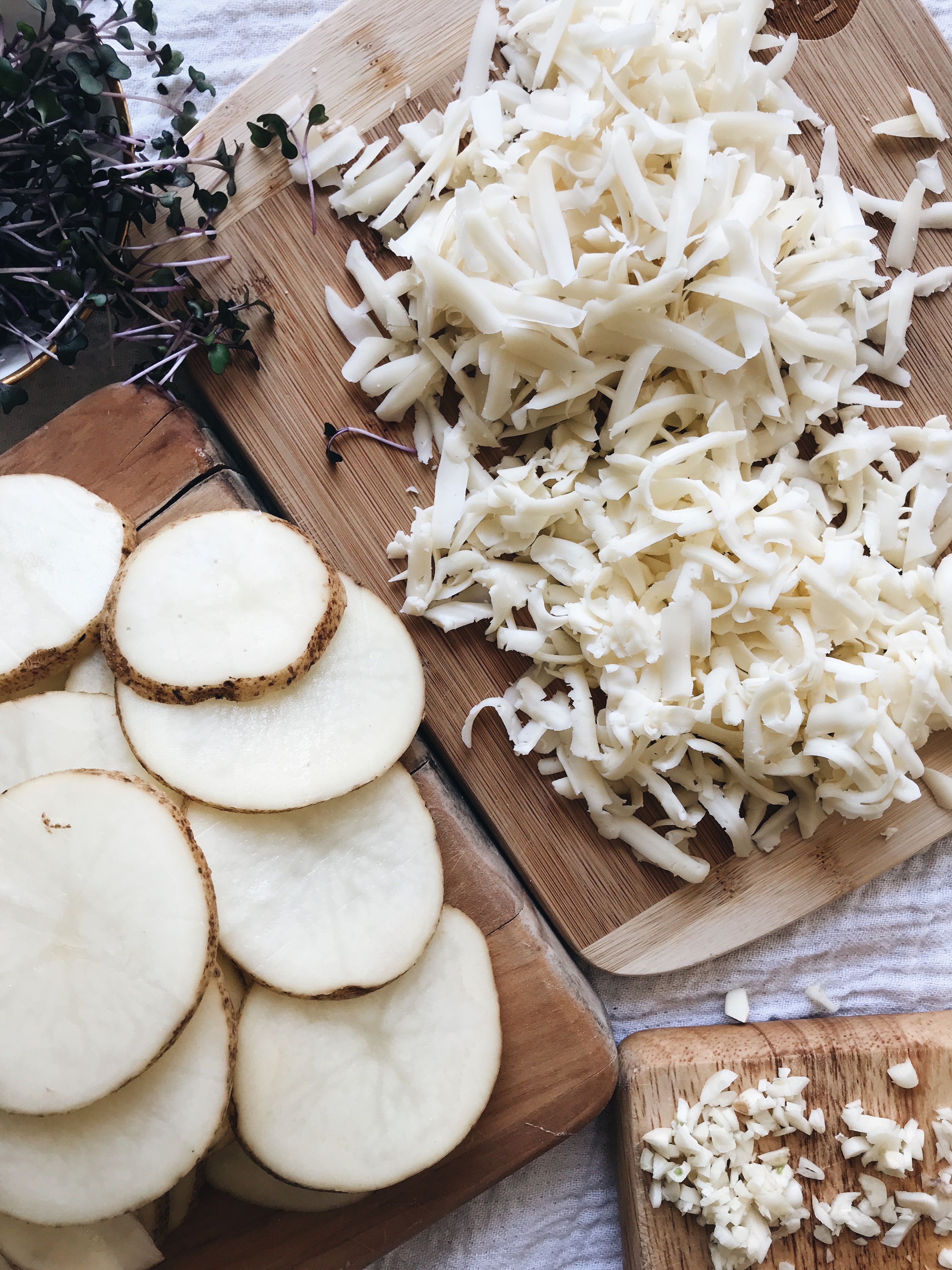 So of course I had to come home and immediately change her recipe by adding ALL THE CHEESE and sautéed garlic.

But not just any cheese. It had to be a mix. A perfect mix of creamy meets nutty meets depth meets my mouth. So I used two of Roth’s most popular cheeses, the Grand Cru and the Havarti. 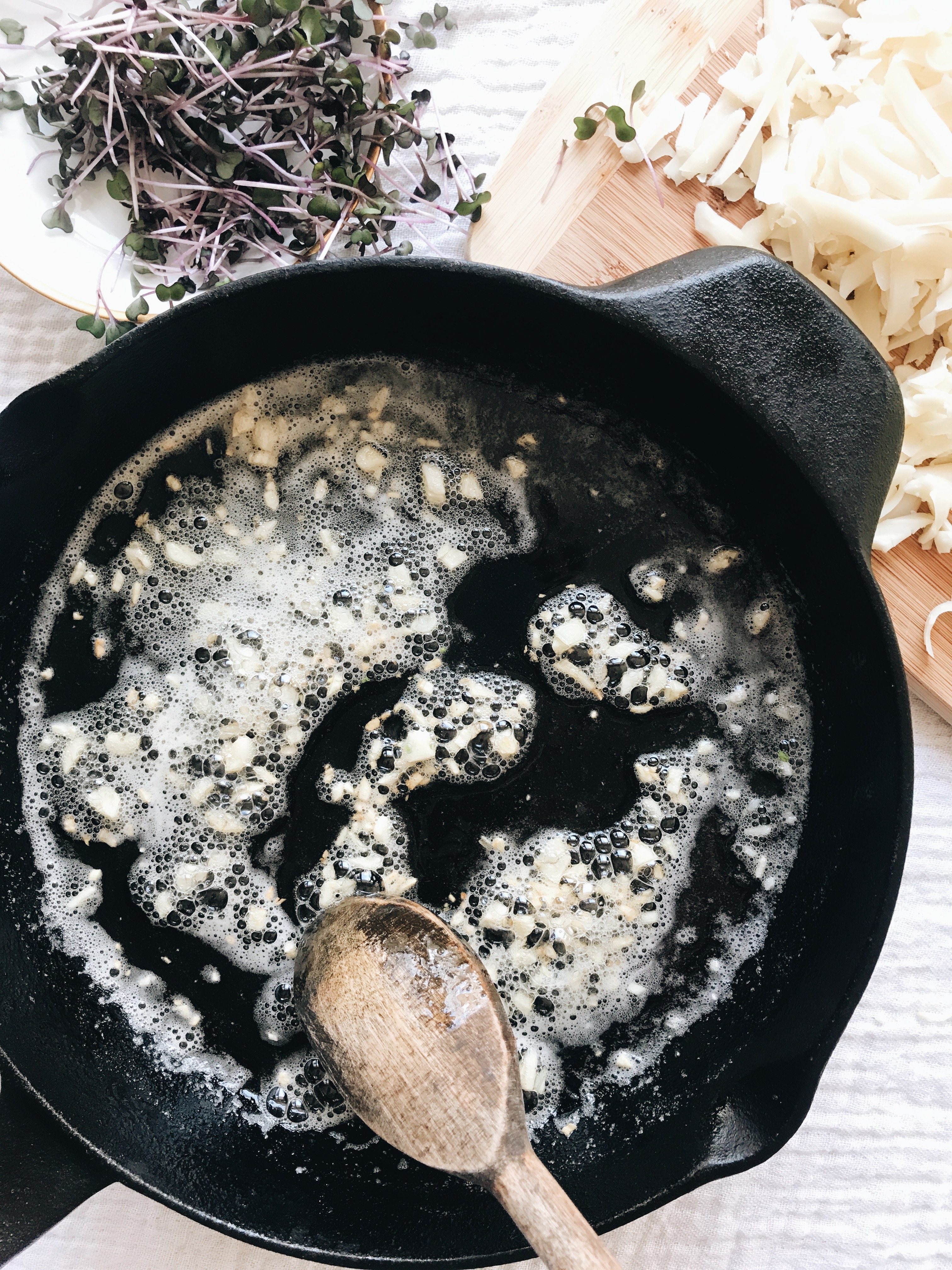 So first you’ll melt three Tbs. of butter, and sauté a few cloves of minced garlic in it. My garlic was thin and wimpy, so I used five cloves, to feel more like three gutsy cloves. (Should we start a band called Three Gutsy Cloves? I think we know the obvious answer here.)

After you slice your ‘taters, dump them in a big mixing bowl, and pour all the sautéed garlic and butter in with it. Season with a big pinch of salt, and give it a good toss with your hands. Get it all coated. There you go. Coat it coat it coat it. Just like that.

WHAT, you’re going to anyway. 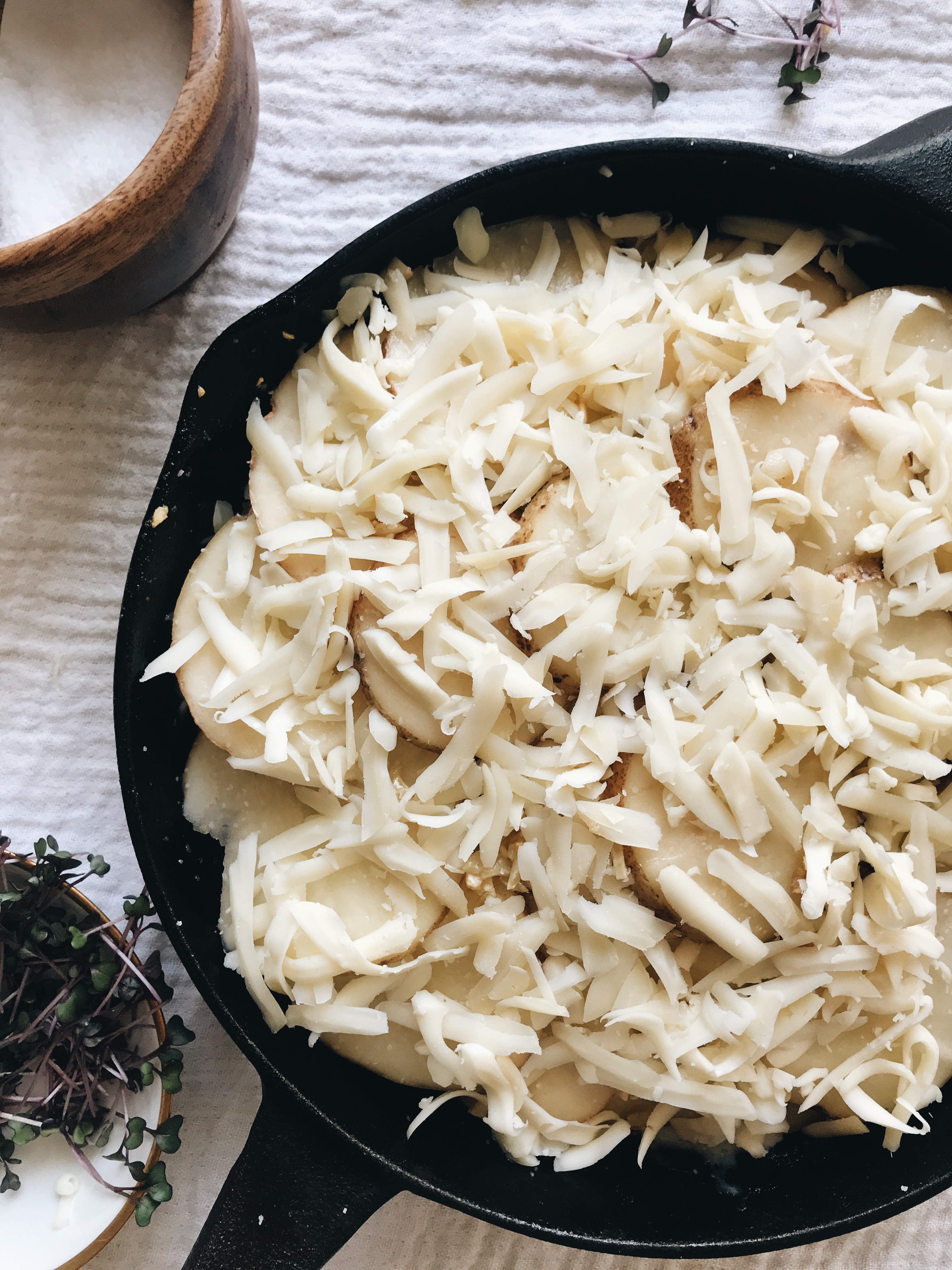 So this is a little trick. Put a low flame under that cast iron skillet again, while you layer the potatoes. It will do magical things to the bottoms of the potatoes that you can’t not experience in this life. 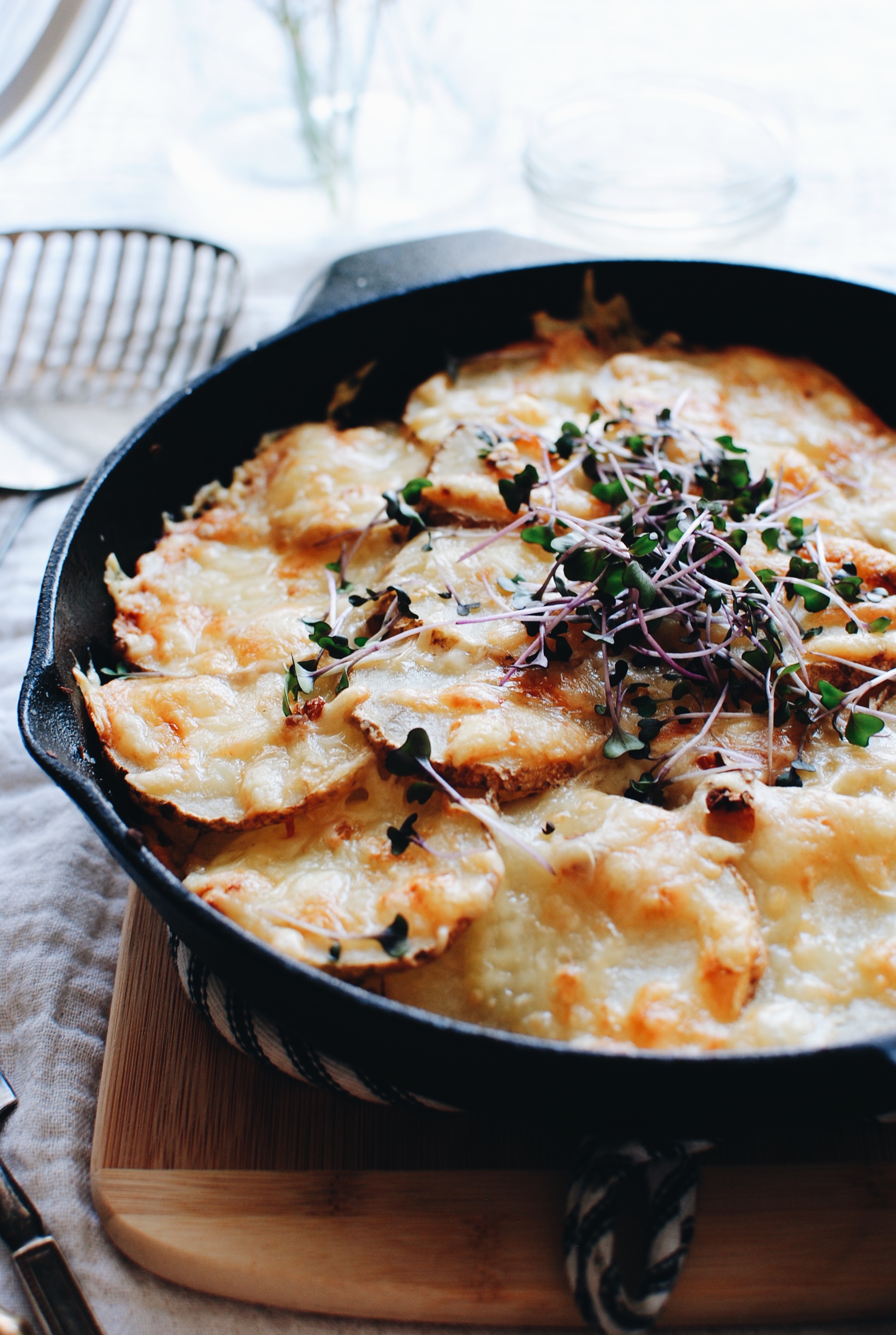 45 minutes later, guys. Cover it for 20. Uncover for 25. And this is what happens. Look at that CHEESE. I’m irrationally obsessed with the two Roth cheeses together. The Havarti has that unmistakable mellow creaminess. And the Grand Cru with its nutty, slightly floral jam going on? UGH, please. 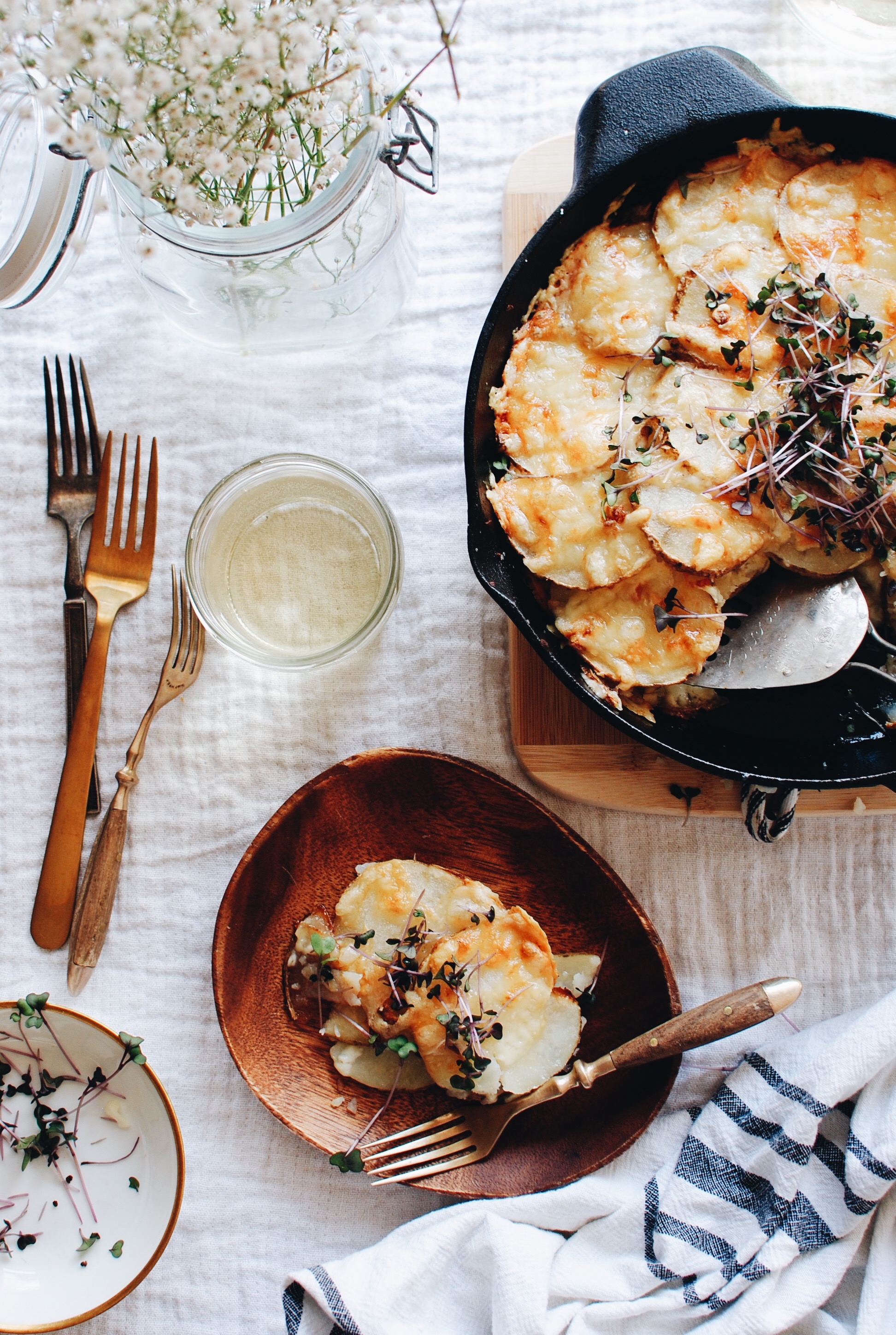 And garnish it with anything! I had some nice peppery cabbage sprouts, so I threw a mountain on top. But seriously, parsley is great. Make your life good and easy and happy.

I served this with seared steak and a classic wedge salad and ALLLL THE PEOPLE SAID JEAH. 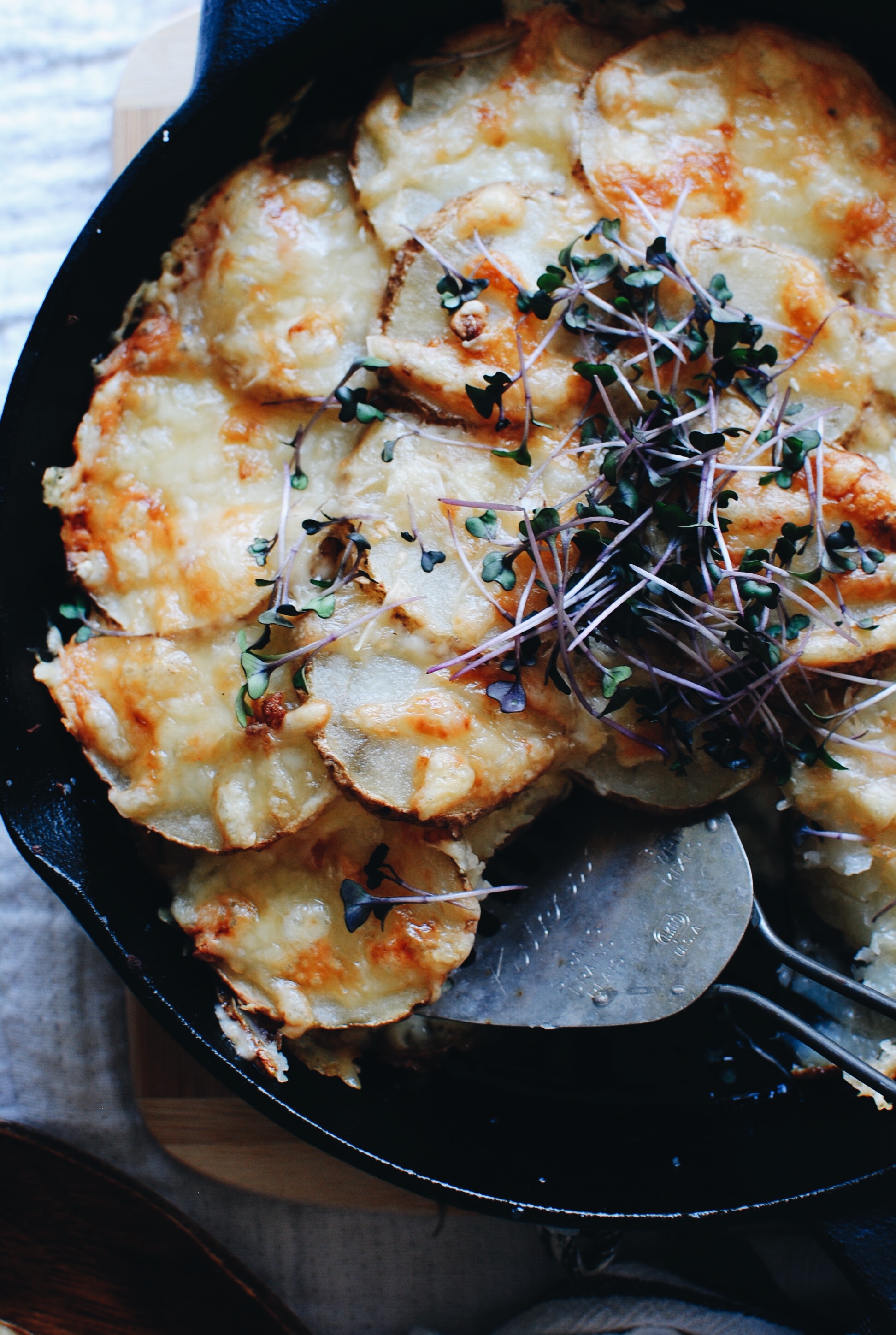 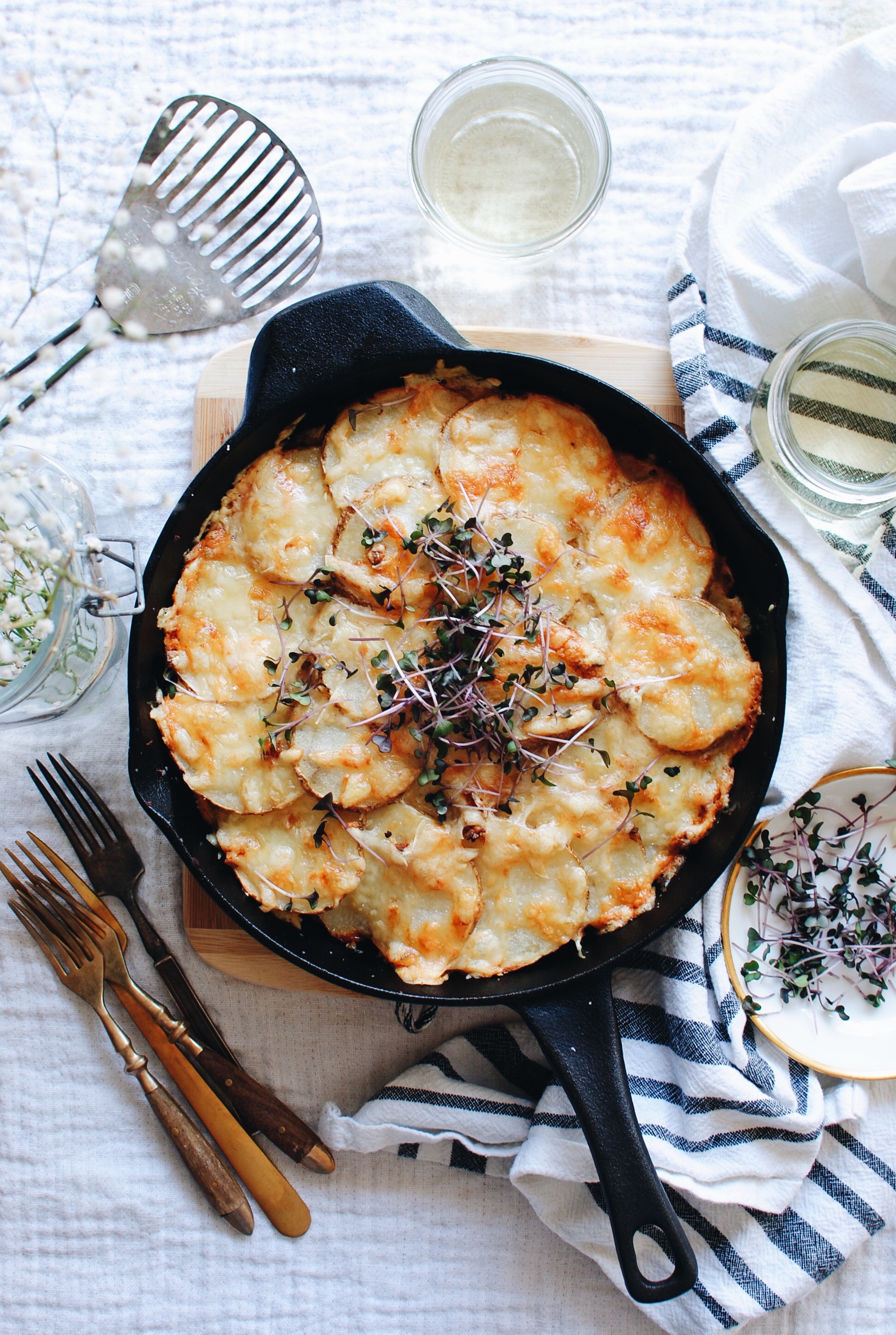 I already can’t wait for you.

(This post is definitely in partnership with Roth Cheese. But all ramblings and cheese inhalings are totally my own. We coo?)