I had no idea that pacific razor clams are the size of baby elephants. They are like, super mammothy. WAY DIFFERENT than the long, thin ones you’re most likely imagining right now.

Guys, I’m about to take you on a journey. A razor clam awakening of sorts. And before you get those fingers ready to fire out grossed-out barfy comments, hark! I hear you. I get it. They’re um, not pretty creatures.

But we clammed! We HUNTED.

For those in the area, and interested in razor clamming, and not completely icked out by these things, I’ll tell you right now that Gearhart is THE PLACE. Just a hair north of Seaside ON THE 101 (said like an SNL Californian), about a half-mile stroll from the road to the water. You’ll see people EVERYWHERE. Just everywhere. Although there are none in these photos. I swear they were there. They were.

You basically find a little hole in the sand at low tide, where it looks like a clam might be underneath it, breathing up bubbles, and then you plunge the tube into the sand, and it sucks up the clam, and you pull it out of the sand and dump out the sand while hoisting a gradual gut laugh like Count Dracula. And it actually works! LOOK.

That thing is the size of a horse’s face. Just insane.

After a soak in cold salt water and a good rinse under the faucet, we’re ready to cook! And yes they look like massive cow tongues but we’re going to breathe deeply and get through this.

First, you bring a large pot of salted water to a boil and plunge the clams in (two at a time, or whatever works) for about 10 seconds, until the shells pop open. And life is about to take a strange turn for you, so just take hold of any strength you have. Or a glass of wine.

Because these are naked razor clams, you guys. This . . . this is what they look like outside of their shells. That right there. ^ That is it. I’m thinking maybe they should have stayed inside?

Also, just checking in on you emotionally. Everyone okay? Hanging on tight?

We researched how to clean them, how to prep them, how to reach inside our souls and search for the confidence for what lies ahead.

And I will say, (don’t hate me!) that we removed the insides (with that little sack of dirt in it) completely and tossed it. Which, if you’re seasoned at this, you’ll know exactly how to clean and chop that part. But we’re sissies. And first timers! And I’M OKAY WITH THAT.

And they resemble baby shark faces and I DIDN’T KNOW CLAMS COULD LOOK LIKE SATAN AND TASTE LIKE HEAVEN.

So we chopped it all up.

THIS is the guide we used on how to properly prep and clean. So do this!

Also, in a pot goes butter, red onion and garlic, crushed red pepper, white wine and chicken stock. Seafood stock if you have it! Sizzle sizzle, simmer simmer. You know.

Then add the chopped clams to the sauce and let it all marry up for a couple of minutes.

You’ve also boiled some spaghetti and transferred it over to the pot. Turn off the heat, add some lemon, parmesan and chopped parsley.

The clams (while looked like nightmares at one point) are absolutely delicious. Light! Oceany. Almost ocean AIR-y. So fresh. Not rubbery at all, I was totally surprised.

We clammed. We conquered. And we ate. 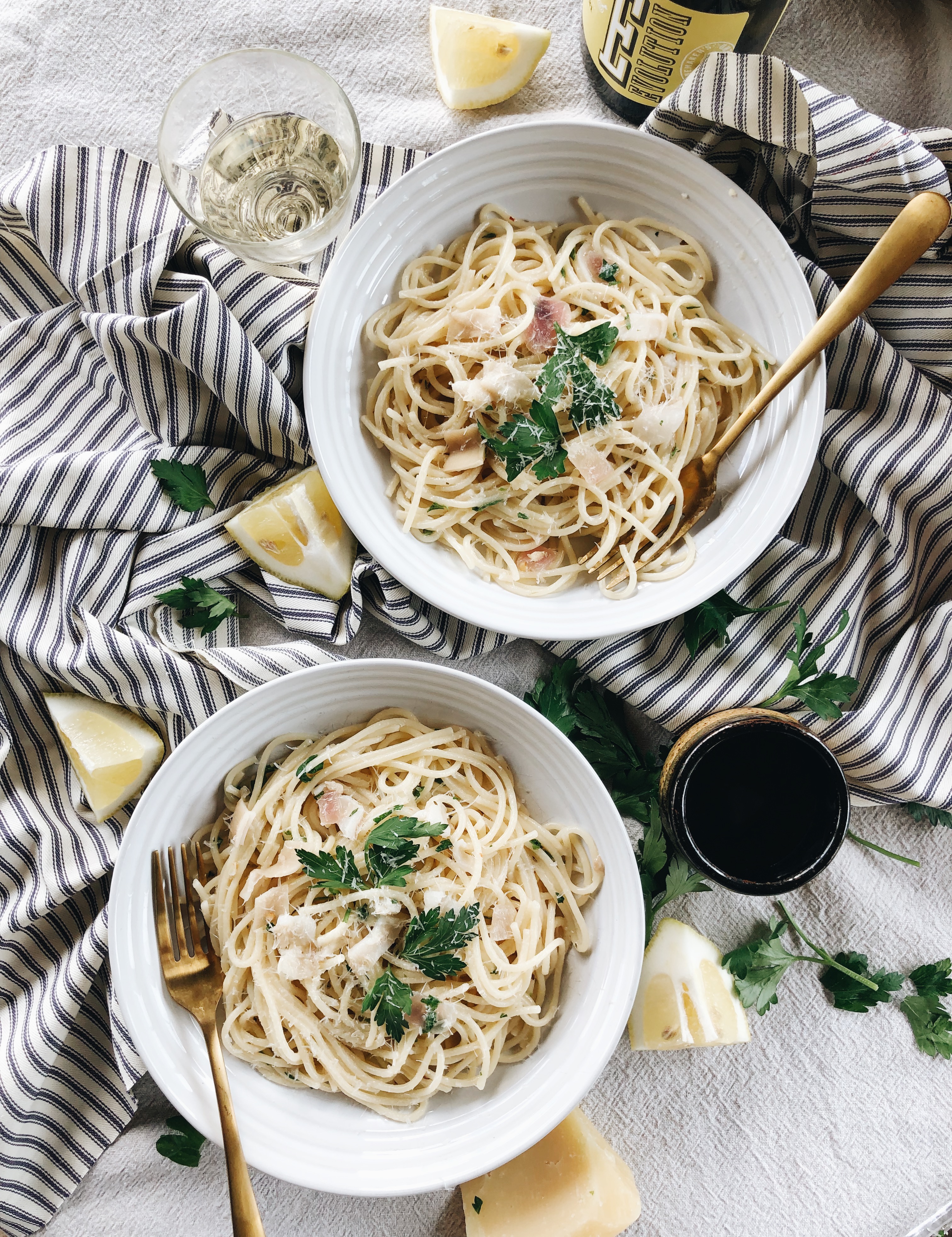 Have you done this?! Have you razor clammed before? TELL me – did we do anything wrong, or wonky? Also, you can absolutely swap in regular clams in place of razor clams if this whole thing made you never want to come to Oregon ever.

49 Responses to Spaghetti with Razor Clams