It’s been an entire year since I’ve screamed Christmas songs at you. You’ve ached daily for it, haven’t you?

Welcome to the last edition of Snoopits for the year! I need to think of things for you to snoop in 2015. My sock drawer? (just kidding) My collection of empty peat moss bags? (just kidding) My diaper genie? (please don’t leave me) 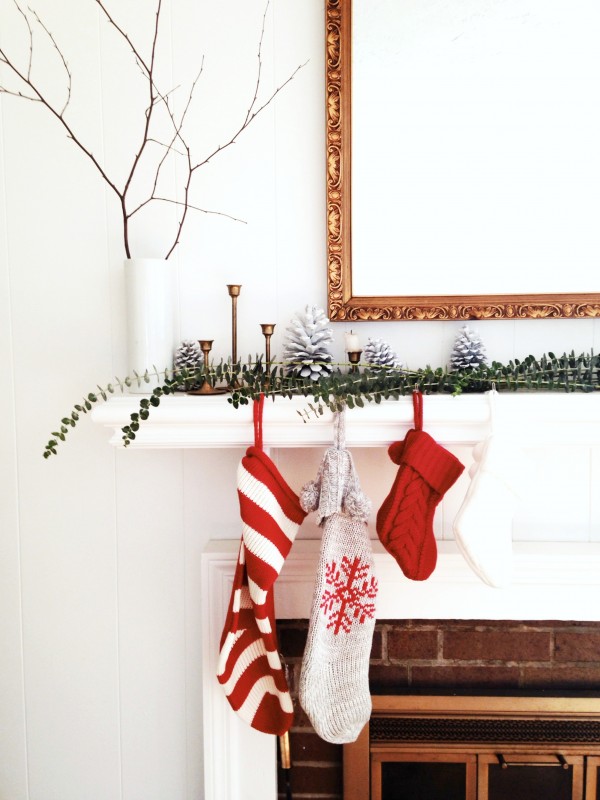 It’s officially Christmastime! As you knooooow, I had to decorate 17 months ago for a photo shoot, and I seriously feel like Christmas done diddly came and went already. We still have 23 days left. Am I sad? Am I excited? I’m not sure. I’m still processing the latest episode of Parenthood. I mean WAT.

So the mantel. A lot of you asked about the stockings on Instagram, and I’m here to say, they come from a far away land filled with fairies and elves viciously working overtime. Errr, Target.

My friend gave me the fresh eucalyptus nudge, and I’m telling you, all it is are loose strands placed on top of each other, creating the “garland” look. And it smells spicy and foresty and fresh. Me digs!

The twigs in the white vase? From my back porch after a windy day. The end again. 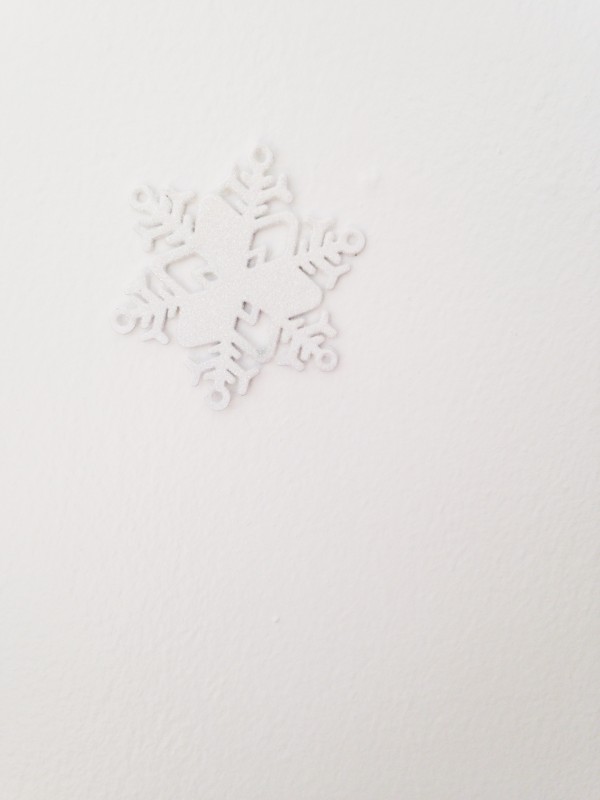 Okay, so last year we randomly found these small, white snowflake magnets at a thrift store. Like, 25 thousand of them. But instead of putting them on the refrigerator like normal weirdos, we stuck them on the wall where the stud nails are! Ha ha hah! Ah ah! Ha ha. Oh.

Anyway, Aaron wanted to cover an entire wall with snowflakes, and I was like, “Dude, we are not doing that.” He sulked, “Why not? It would be awesome!” Me, “No it would not. We would look like tacky freaks. Snowflake magnet tacky freaks.”

So instead of putting up 25 thousand, we settled for 14 thousand in the corner behind our tree. Tacky freak crisis averted!

I should have included a banana for scale. 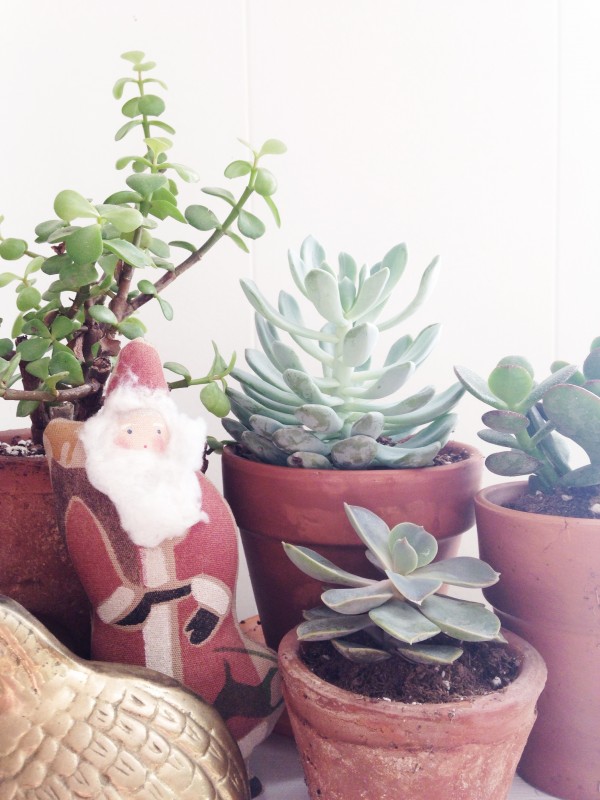 Did you know Santa likes succulents? He does. He told me when I was a very small child. He specifically said, “I love succulents.” Okay, the truth is I asked him for Malibu Barbie and he left me a prickly cactus with a note that read, “u succ.”

I actually have more Santas (one old fashioned and wooden, one stuffed and faceless) but you guys, my phone died before I could take photos. Not like, oh-just-plug-it-in died, but died died. It shuts itself off and may or may not randomly turn itself back on. It’s officially been lifeless for about  . . . oh . . . ever. I’m almost dead myself. I can’t text, I can’t Instagram, I can’t do anything. It’s like the ’80s! This is what life must have been like for Debbie Gibson. 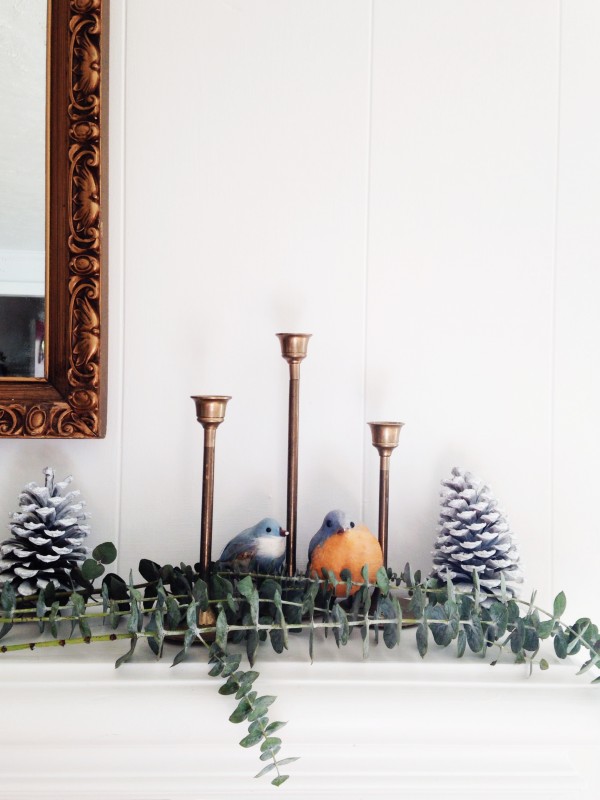 I know some people absolutely hate birds, so if you’re in that camp, I want to apologize right now for this terrifying image that will probably haunt you in your sleep until April of 2028. But I love birds! These little gems were found at a . . . wait for it . . . thrift store. Just nestled all cute in the fresh eucalyptus and in between thrifted (shocker) brass candle stick holders. I’ve named them Brenda Walsh and Kelly Taylor. They’re discussing the latest Parenthood episode and the bull honky donk of leaving us with those traumatic cliffhangers with over a month until they’re resolved. Brenda’s writing a letter to congress. 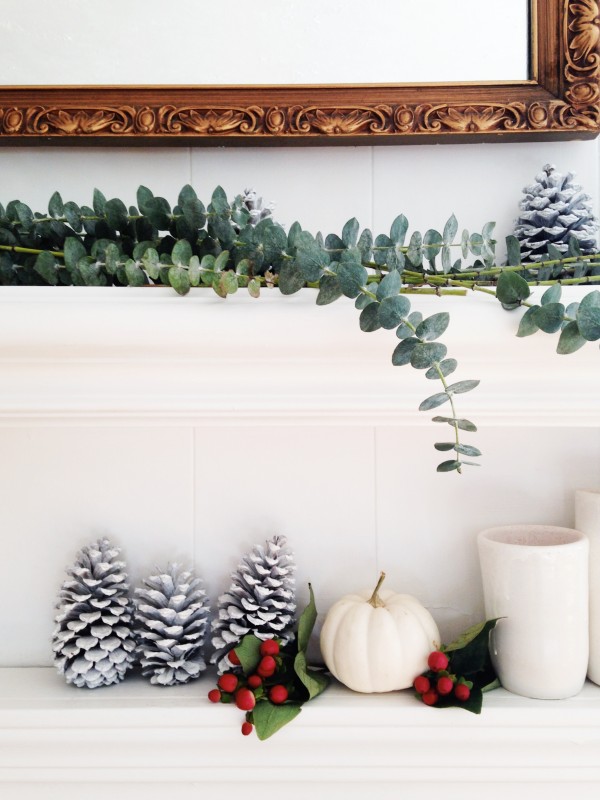 Just another area of the mantel with my painted cones, some fresh berries from the backyard, a white pumpie and fresh eucalyptus. Simple. Nature-y. Strong enough for a man, but PH balanced for a woman. 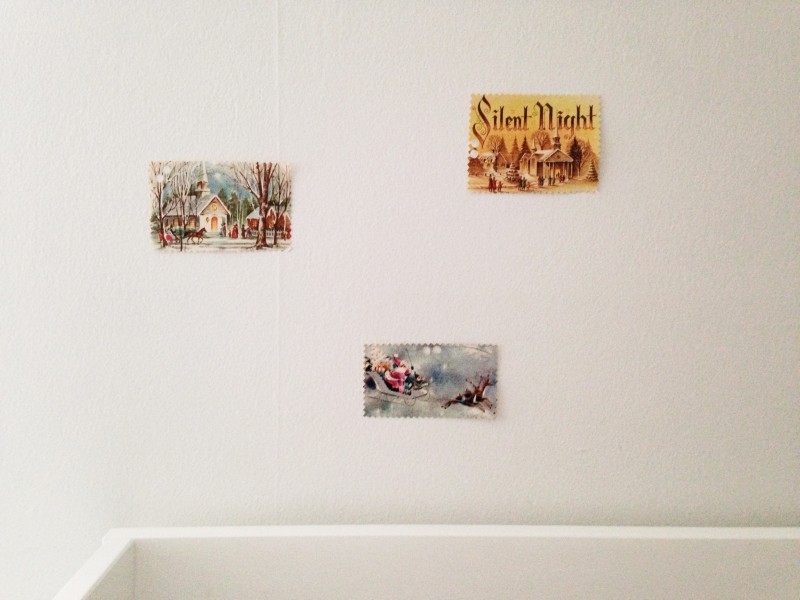 Hi, my name is Bev and I’m a thriftaholic. Ugh, indeed, these vintage Christmas cards came from my favorite little place down the street. But how cute are they above the crib in the nursery? I like to imagine the babies standing up, eagerly grasping the edge of the crib, gazing up at the magical images in wonder, wishing they could blink and immediately transport themselves right into the enchanting scenes. Or you know, rigidly standing, possessed with hunger and desperate fingers, ready to rip them from the wall and shove them into their faceholes like a tiny paper bloodbath. Either or. 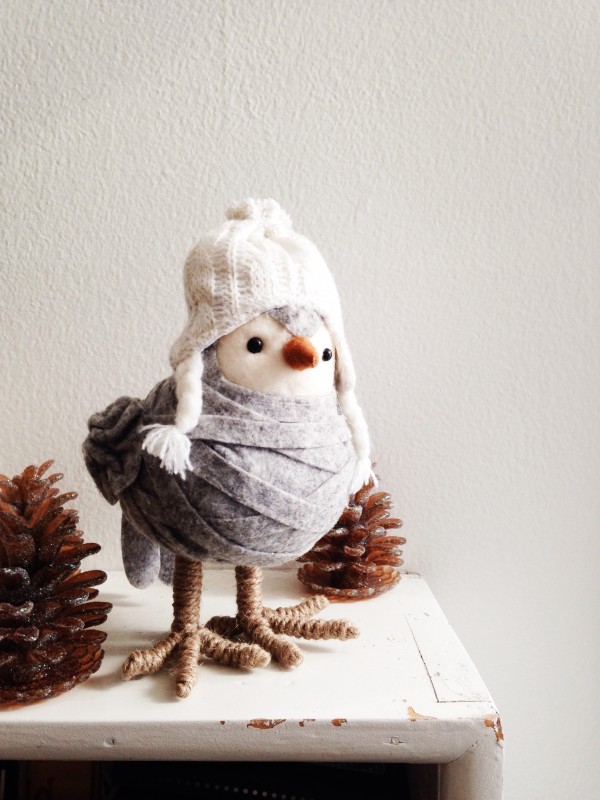 And to end our holiday tour, a cute little tobogganed bird with goldish glittery pine cones from my grandmother’s closet. (that’s not the name of my thrift store I swear.) His name is Dylan McKay and he sits on the bookshelf in the nursery. He just came from Brenda Walsh and Kelly Taylor’s mantel nest, and as you can see, he’s still in shock over the latest episode of Parenthood as well. For real, WHY WOULD THEY DO THIS TO US? At least I have a month to figure out what to do with the lakes that have pooled under my eyes. For Pete’s sake.

13 Responses to Snoopits: The Holiday Edition