And by part five I mean week FOUR and we’re already home so never mind.

But don’t x out! I’ve got the veeeery last seven days to show you, and then we’ll wrap for good, shed our tears, bring it in and then it’s back to recipes from here on out.

On Monday, we ate through four strawberries.

Wait, that’s not it.

On Monday, we rested! ‘Member how insane Sunday got? We needed nothing but loooow key, movies and leftovers all day.

That is, until BINGO NIGHT AT THE NEIGHBORHOOD COMMUNITY CENTER. I’m only screaming at you because it was so Dirty Dancing meets Parent Trap meets Wet Hot American Summer meets church camp in the late ’80s. I did actually go to yoga that morning in that very same room! First yoga class since Watergate. Felt guuuud.

Also, we didn’t win. And if you watched my Stories, you saw just how NOT OKAY Nat was with not winning. Homegirl is suuuuper competitive, and was basically destroyed for life. She bawled so hard. I laughed and recorded it for Instagram obviously.

The next day we went on a pizza comparison crawl! And by crawl I mean two places because blorb.

I had soooo many people tell me to skip Mystic Pizza (to which I was like, BITE YOUR TONGUE.) and head to Pizzetta, just around the corner. Also, this pizza was under a giant red umbrella. I edited and re-edited this photo, so this is as good as it’s gon’ get.

Now, the pizza was fabulous! Thin crust, perfectly acidic tomato sauce, fresh mozzarella, 100% Neapolitan. It flopped over a little more than I prefer, but that’s just a me thing. If that style of pizza is your jam, you must visit. (I still loved Mystic Pizza with all my heart. Really! This is not a joke. The pizza’s wonderful and don’t try to convince me otherwise because you are wrong.)

Next up, we headed back to Stonington (which was like, six minutes away. EVERYTHING WAS SO CLOSE THERE.) for a more traditional style at Stonington Pizza Palace, hiiiighly boasted by the locals. So obviously I had to have it.

AND THIS IS WHAT’S CRAZY. The older I get, I think I prefer a more nostalgic slice. Don’t get me wrong. I don’t like overly puffy crusts topped with meatlovers’ supreme blast extravaganza palooza blorb town. But! Give me a little more guts to my ‘za (<—omg sorry), with a sliiiiightly thicker (with a hint of sweet!) crust, some good BURNT shredded mozzarella and I’m a happy gal.

We got the Hawaiian, and it was glorious. I cried for a month. I’m still crying.

Right after that we were headed to a swim day play date (YES WE MADE FRIENDS why do you look so surprised?), until we spotted the cutest lemonade stand right down the street from our cottage. These kids were pouring lemonade into tiny cups for a quarter, and DRAWING pictures for another quarter. It was so darling, you guys. That is until Natalie asked for a fairy princess drawing, and the little girl took 75 years to draw it. Because not only did she draw the princess, but she added like, this whole majestic empire SCENE behind her. SPECIFIC WEATHER, all these crazy animals, intricate details on her dress. Aaron and I stood with our backs burning into the sun, as we both mumbled under our breath, because we get each other, “Skip to the END.” If you can name that movie you win at life.

(of course we kept the drawings.)

Wednesday was Newport! Eeeeeeveryone made it verrrrry clear that Newport needed to be our new life and if we didn’t go we’d regret it for the next 87 years. So we went!

And it really was gorgeous.

But this makes me sad.

I didn’t realize that JFK and Jackie got married at the church right there in town, so when we passed it I said, “Ohhh, pretty church.” But I didn’t take a photo for you.

WILL WE EVER RECOVER FROM THIS?????

This is right in Whaler’s Wharf.

Wait, that’s not it.

BOWEN’S WHARF! A quaint, historic shopping and restaurant district right on the water. I think it’s been there for like, 67 trillion years or something. I loved it.

Look at that cuteness.

We did it! Totally went to the Black Pearl and ate……..

THE CHOWDAH! World famous. Insanely delicious. Herbier than other chowders we had on the trip, but still. The chunks of clam were ENORMOUS and succulent. The potatoes were perfect bite sizes, and the cream wasn’t too runny, or too gloppy. It was ridic. You have to go.

I have nothing specific to share about this photo except I want to make my life solely about that bicycle.

After lunch (and a quick stint in the arcade right there across the street while mommy shopped for New England-y CHRISTMAS ORNAMENTS, yes I’m a grandma.), we made our way to Easton’s Beach, like 5 minutes away because EVERYTHING WAS SO CLOSE THERE.

New England is big on carousels, guys. They’re old, historical, Presidents had babies on them, I dunno. It became sort of a goal to seek out and ride ALL THE CAROUSELS. This was right there on the beach. You gotta go.

Right after that, I obviously begged the Del’s dude to let the kids raid the truck and make back all the money I’ve spend on the trip so far. 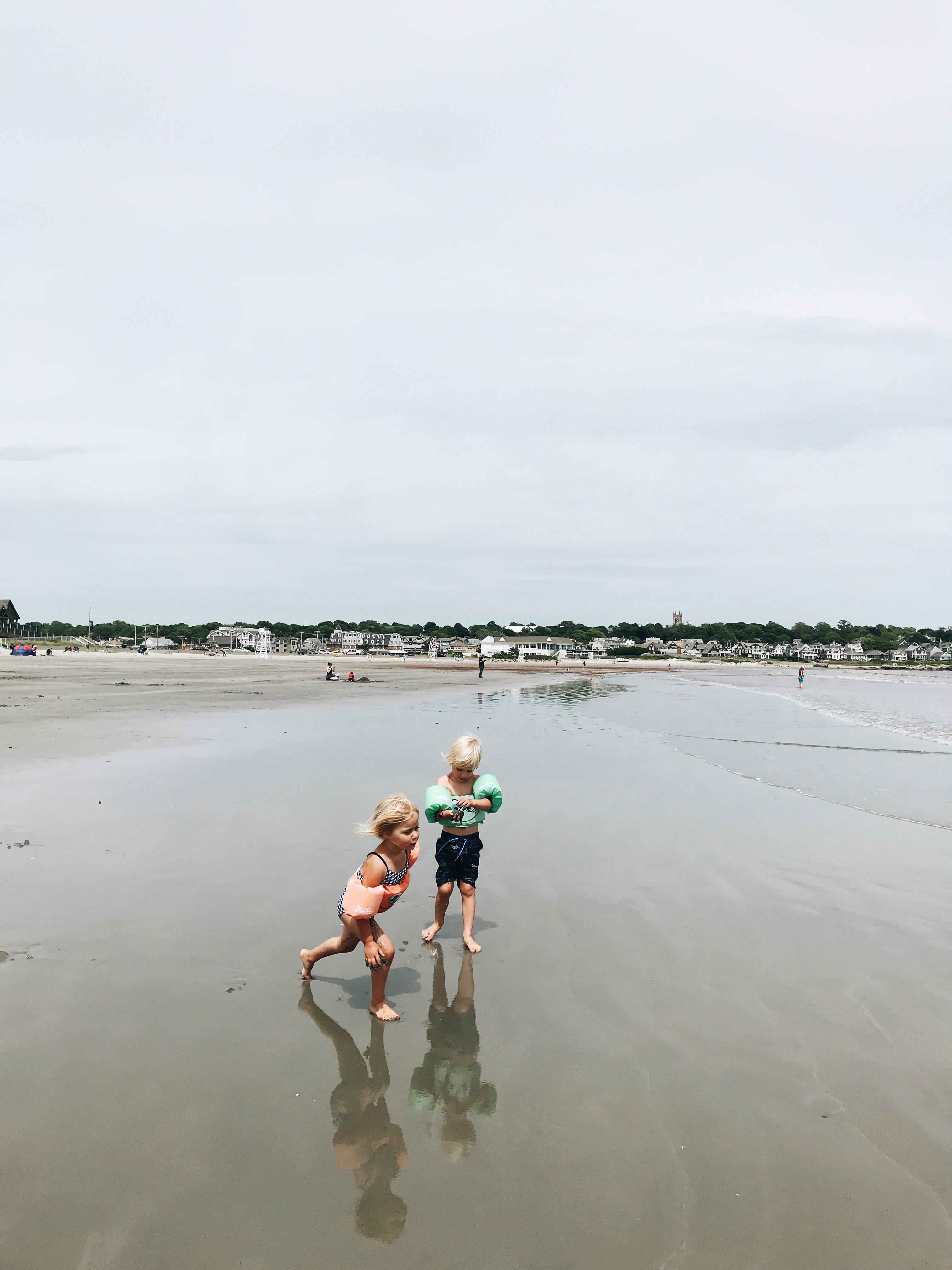 It’s hard to see, but that’s red seaweed (RED SEAWEED) back there. I don’t know why it’s red, but I was completely sure it was blood from a shark attack. And I was probably very loud about it.

Right after some sun time, we took the .2 second drive across the street and visited the faaaamous Flo’s Clam Shack! Nat was very into wanting to pose. We have a little work to do, girlfriend.

The fried clams were some of the very best we’ve ever had, and we had a LOT. *blorb

The next day was drizzly, and we were definitely feeling a much-needed slow down. So I ran a couple of grocery errands while the kids movie marathoned all afternoon, I picked up dinner, and we were all in bed before the sun went down. It was heaven.

Friday morning we headed over to Noank for the last time (waaaah) for breakfast at highly-recommended breakfast spot, Carson’s! It was so cute, and SO GOOD. Simple diner food, but with a twist of elegance. And surprisingly amazing prices.

Also, Will spilled an entire container of creamer all over Nat’s lap, table and deck. It was super n’awesome.

So this is what I had. Multi-grain ciabatta with wilted spinach, grilled sausage, an egg and melted boursin cheese. UM, LIFE.

After that we hit up the PACKEY (locals call it packey so I called it packey, deal.) one last time for some beers (beehs) and a final stroll around the tiny, manicured, floral, seaside neighborhood.

That sentence had a lot of commas.

They loved waiting on dad.

Headed back to Mystic for our final afternoon of souvie shopping, ice cream on the drawbridge and a snack. Obviously.

Oh! See that ship in the waaaay background? That’s the seaport that I freaked out over! WE WENT ON THAT SHIP.

(You’re so over this trip.)

Oh! See that large black metal thing jutting into the sky in the background? That’s the drawbridge!

(I swear this is almost over.) 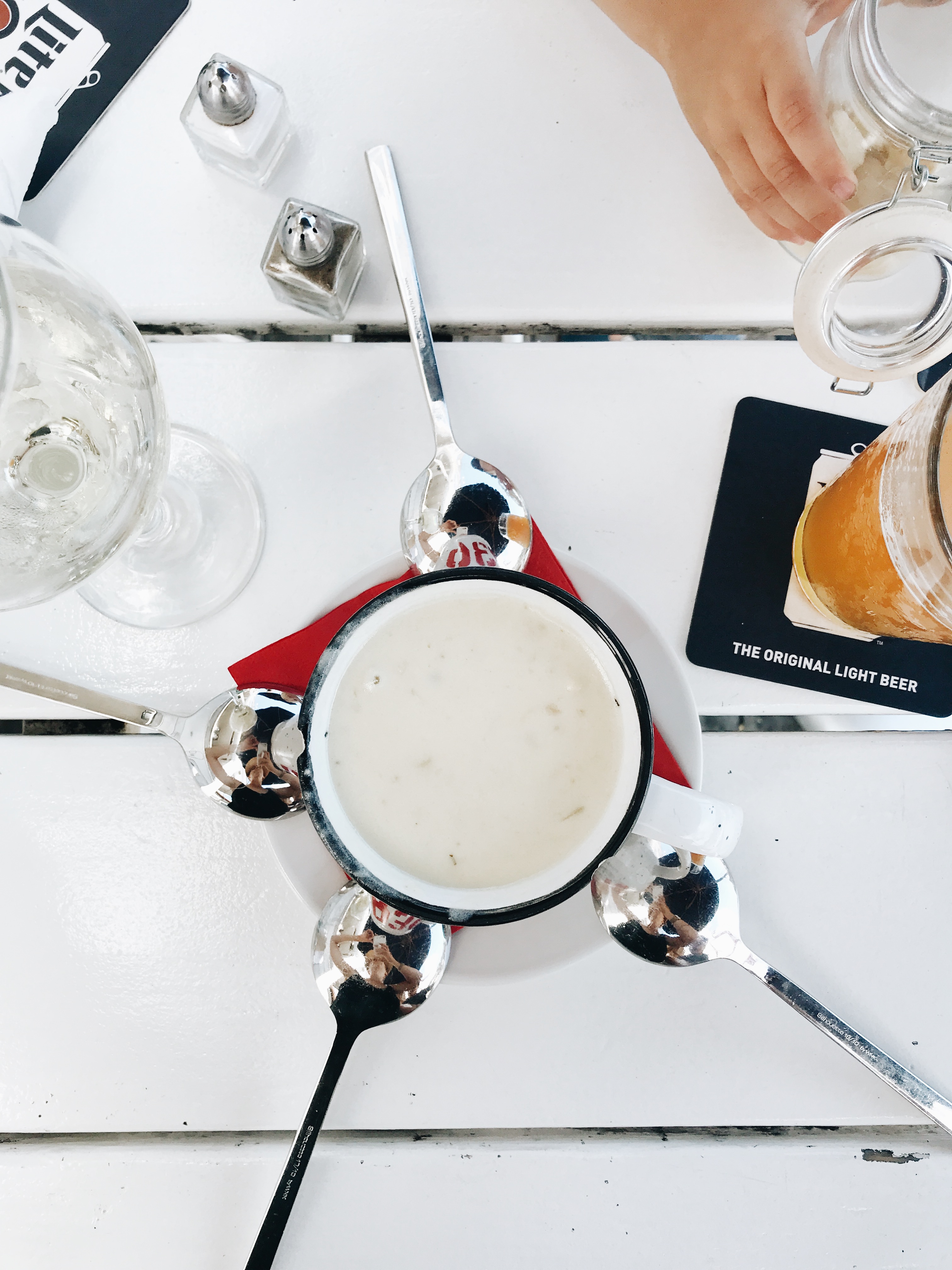 One last chowder at Red 36, which so many of you recommended, and we almost didn’t make it there, but I’m soooooo glad we did because IT. WAS. FABULOUS.

The view. The oysters. The sauv blanc. The breeze. I wept.

By the way, I’m now super into oysters. But I feel like I can’t eat them in KC. Is that gross? Who here in KC has good oysters? I’m scared.

Look at those boats! I feel like we’ll never see a boat again.

On our way home we randomly stumbled upon the cutest little honor-system farm stand you’ve ever seen. Bustling with locals in and out, picking out snow peas and fresh zucchini. You drop a $5 in a box, get your goods and you’re on your way. HOW IS THIS LIFE.

Once we were back at the cottage, the sun had reaaaally started to show its mood, so down to the dock we went.

And guess what, I GOT IN. I sat on a light blue blow-up raft and paddled out to that floating raft, sat on it and took in the view for about 20 minutes, then paddled back.

But the view I can handle.

Saturday morning, our final final day, Aaron’s Aunt Marcia and Uncle Glenn (and cousin’s hubs Ganesh!) drove the one hour south (he came over from NYC) to give us a farewell squeeze, see our digs and drop off a pair of Nat’s sandals that we left at their house. Of course.

So we showed them a few beaches at Lord’s Point, dipped our toes in the water and breathed in the salty air for a few minutes.

Yes that is a giant boulder and my tiny babies are at the tip top of it. I’m fine.

One last rinse off in our outdoor shower! (I have to show you these details. IT’S WHO I AM.)

That evening we went back to Dog Watch in Mystic, where it allllll began one month prior. I had the tuna tartare tacos (divine). Aaron had….

A lobster roll. And it was SO, SO GREAT. Cold, this time. With a light coating of mayo and maybe a little bit of chopped celery. The perfect way to end the whole trip.

Well, that and dessert.

After dinner we took ONE. FINAL. STROLL. (you’re like, you keep saying that I want to paper cut you.) down at the dock.

Really, kids. We have to go. I need you both to physically stand up and propel your body in a walking motion.

Aaaaand Sunday morning we pulled away, right before 7am to begin our 20-hour car ride with two over-it toddlers and one over-it pup home. WAAAAAAAAH.

By the way, here’s the cottage info! A tonnnn of you have emailed about it, so if you want to book, her name is Susan and she’s fabulous. Tell her I sent ya. 😉

23 Responses to Our New Life in Connecticut Forever: PART FIVE