And no, this isn’t Paleo, but you gotta remember we started this thing on August 1st, and I’d shot this recipe right before that. So if you’re a PaleNo person, this is right up your lane.

I said lane instead of alley because no one picnics in an alley. Not unless it’s oozing garden charm in the English country with vines creeping up all over it and vibrant green lush ground cover and Timothée Chalamet on horseback.

Also a back yard will do.

So this is what we’ve got! It’s one of those marinate-your-chicken-early-in-the-day situations and then slap it all together at picnic (or lunch or dinner) time and boom, savory meets sweet in a toasted billowy sandwich.

I feel like your ears perked up just now.

The chicken – I took three breasts (two pounds-ish), butterflied and them cut widthwise. You’ll end up with two-three small pieces of chicken PER sammy. Sorry I said sammy.

Just give them a good sear on both sides. That Rosemary-heavy marinade will carry through in the chicken and it’s suuuuch a rewarding mouth experience in the end. That was an odd way of saying it’s tasty, but I think you can live with it.

Here’s our honey sauce – it’s literally just honey + minced Rosemary. I’ll show you what we do here in a second. SIMMER DOWN, okay?

You can take that honey sauce and spread it over the bottom Ciabatta half if you like. You can also spread a little mayo if that’s more your bag.

Then just layer two or so pieces of cooked chicken on top (depending on their size and how much you can get on there without getting mad at me), then a few spinach leaves, and a couple of brie slices. This is about to go in the oven for a few minutes, so put all this on a baking sheet like I did, or else your hair follicles will be haunted with cave crickets for the next 17 months.

Look I don’t make the rules.

Look at that OOZE, man. Such unruly lusciousness, staring us right in the face.

Take that honey sauce and spoon it over the cheese. Just go for it. This is that sweet on savory bliss, and you’ll thank me for it.

Spoon a little more. You know what’s good for you.

The Ciabatta will get a nice crispy texture on the outside, while the insides stay soft and billowy. And the brie might want to slide off because physics, but just take your little fork and it scoot it right back up on top of the spinach like a good cheese. ‘Atta cheese.

And then if you’re obnoxious like me, you can wrap them in dainty parchment or butcher paper, tie with twine and stick a little rosemary garnish in with each sandwich. LOOK IT’S PICNIC CHIC, OKAY?

On top of that, it’s just a lovely but casual approach to your next Sunday supper or weeknight dinner. A little Frenchish, if I say so myself. And you can let the sams cool before you transport. Everything holds up well because once it cools, it stays put. See how I take care of you?

These are outright divine, with very little work! 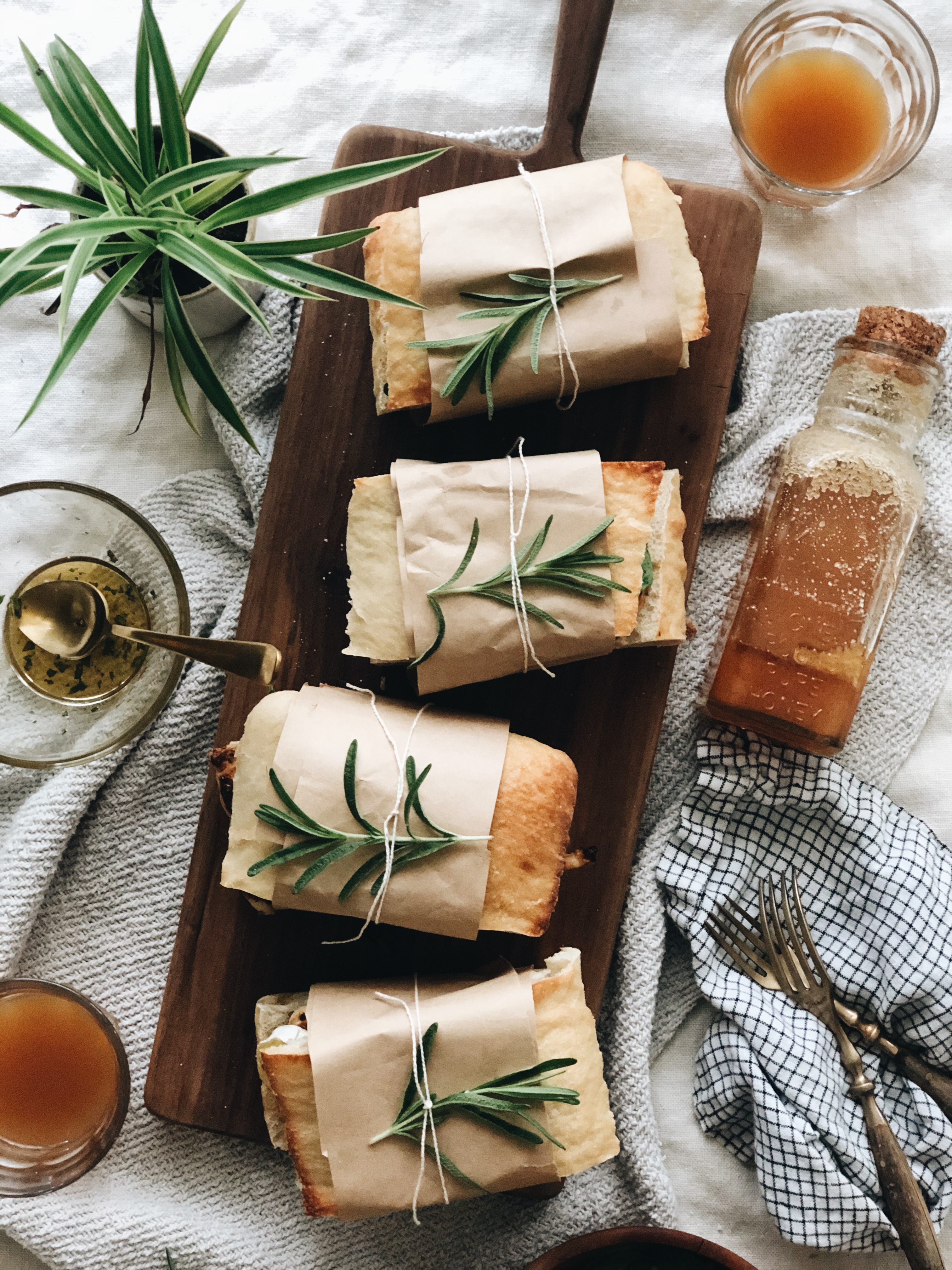 See you at the park. I’ll bring the Sancerre.

10 Responses to Rosemary Chicken Sandwiches with Spinach and Brie